Accessibility links
Alaska Park Is Nation's Largest The Wrangell-St. Elias National Park and Preserve is home to the biggest subpolar ice field in North America, and nine of the 16 highest peaks in the U.S. Smitty Parratt, the park's chief interpreter, talks about the largest U.S. national park.

The Wrangell-St. Elias National Park and Preserve is home to the biggest subpolar ice field in North America, and nine of the 16 highest peaks in the U.S. Smitty Parratt, the park's chief interpreter, talks about the largest U.S. national park.

So a few minutes might be all you need to tour the country's smallest national park, but the largest - well, that will take you much, much longer. At 13.2 million acres, the Wrangell-St. Elias National Park and Preserve in eastern Alaska is the country's biggest national park. It's six times the size of Yellowstone.

Smitty Parratt is the chief park interpreter at Wrangell-St. Elias. He joins me on the phone from the park right now.

What kind of day is out there?

NORRIS: So if you wanted to travel at least part of the 13.2 million acres, what might you see in his huge expanse of a park?

NORRIS: Now, do I hear pride in your voice as you describe all of these?

NORRIS: You do. Everyone has heard about some of the parks such as Denali, Yellowstone where people flock to see the wonders of those places, but very few have heard of our largest national park, Wrangell-St. Elias, and for that reason, visitors to this park have a good chance to experience solitude and wild adventure where they can hike for days or even weeks and see no one.

NORRIS: Well, one place that is one of my favorites was a hike out of Kennicott, a famous copper mine, across two glaciers, up Hidden Creek Valley, past the lake that floods out under the Kennicott Glacier every summer, up to a mountain pass, not knowing how we were going to get down into the Lakina valley with my wife and with beautiful meadows and flowers and glistening glaciers everywhere, enjoying nature and solitude.

NORRIS: My, that sounds beautiful.

NORRIS: It was. And it was a real challenge getting down into the Lakina Valley...

NORRIS: Well, glad you got in and out safely. Thanks so much for talking to us. All the best to you.

NORRIS: Smitty Parratt is the chief park interpreter at the Wrangell-St. Elias National Park and Preserve. That's the biggest national park in the United States.

And if you wanted to see some of the sites from national parks around the country, you can take a tour at npr.org. And while you're there, you can send us photos from your trips to national parks, we'll post some of them at our Web site later this week. 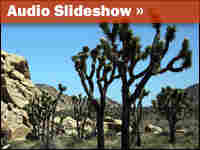 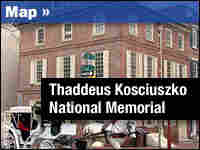 The National Park Service lists the Thaddeus Kosciuszko National Memorial as the smallest national park. But the issue is more complicated than it seems.

The park service manages thousands of sites, large and small. It takes care of things as tiny as statues and grave sites and as gigantic as the vast tracts of forest and mountains in Alaska. Some sites are called parks. Others are designated monuments, memorials or historic sites. All have equal status in the park service.

The Kosciuszko memorial is the park service's smallest autonomous unit, which means it was created by a separate act of Congress. The park service may run smaller areas, but they're usually connected to some larger park and not managed alone.

This summer, intrepid travelers will spend weeks in the great outdoors, exploring national parks across the country. For those who don't have that kind of time, you can always take a few minutes to tour the smallest attraction in the National Park System.

Don't bother with the sunscreen and bug repellent. The Thaddeus Kosciuszko National Memorial is inside a narrow row house in Philadelphia.

And you can forget the walking shoes. It's only .02 acres.

Even Kosciuszko, hero of the American Revolutionary War, didn't think much of the place. In 1797, Kosciuszko, a native of Poland, traveled to Philadelphia to petition Congress for his back pay. He instructed his secretary to find him a place "as small, as remote and as cheap" as possible. He lived there for seven months.

Andrew McDougall, the memorial's sole ranger on a recent visit, gives a very short tour. He points to the rumpled bed and strewn papers and says the park service has tried to capture what it might have been like for this great man living in a small, messy room. It's an inspiration to renters everywhere that a cheap studio apartment could become part of the National Park System, but McDougall says they had no choice.

Kosciuszko spent the war of American independence as an engineer traveling from fort to fort. This room is the only place that can be pinned down as an actual home for him.

You can also watch a six-minute video about Kosciuszko's life. Animated and voiced in the 1970s — the memorial was established in the mid-1970s — the movie seems a little dated. Some of the Revolutionary War heroes appear to have sideburns and feathered hair. If you are a real buff, you can watch the movie again in Polish.

Really, the Thaddeus Kosciuszko National Memorial tells you more about Polish-American pride than the man himself. In Poland, Kosciuszko has the stature of a George Washington — though when Kosciuszko led an uprising in Poland against the Russians, he got his butt kicked.

But his democratic ideals and his success in America have led Polish-Americans to celebrate him. Kosciuszko's name is on bridges, parks, monuments, streets and even a mountain in Australia. There's also a Kosciusko, Miss., and a Kosciusko, Texas.

Even the memorial in Philadelphia was purchased and donated to the U.S. government by a Polish-American businessman.

McDougall says most of the visitors are either Revolutionary War buffs or Polish tourists.

Don't worry about lines. Hours can pass without visitors, but McDougall swears the memorial gets at least one tourist a day. It's a pretty quiet gig for a ranger, he says. There's no snack bar, no parking and certainly no camping. There is a gift shop, but it's really a few shelves filled with Kosciuszko books and a couple of postcards.

"Maybe we can look at it as more quality visitation than quantity," McDougall says.

Still, the place is showing its age. The carpets are worn, and there aren't many real artifacts here. McDougall says that will change when the park service rehabs the place at the end of the year. He says it hopes to bring in Kosciuszko's sword and a lock of his hair.

"The exhibits will really showcase Thaddeus Kosciuszko as an international freedom fighter. Or, as Thomas Jefferson called him, 'the purest son of liberty I have ever known,' " McDougall says.

All that, and an entire national park attraction you can see in less than 10 minutes.