Accessibility links
MS Patient Falls Into American Insurance Gap After he was diagnosed with multiple sclerosis, Jeff Rubin of Philadelphia went bankrupt paying for his medical bills. Would that happen in England? Both the U.S. and the U.K. ration health care. A look at patient experiences on either side of the Atlantic. 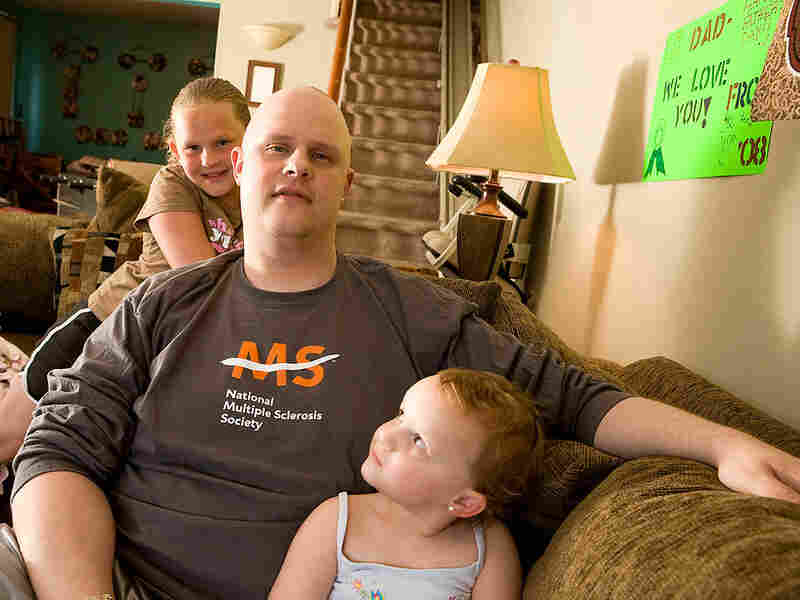 Jeffrey Rubin at his home in Philadelphia, with his daughters Taryn, 4 (front) and Lexie, 9. Katja Heinemann/Aurora Select for NPR hide caption

Just outside the storybook English village of Buckland, 55-year-old Briton Linda Oatley is getting ready for something she considers torture.

Oatley is in a mirror-lined room filled with cheerful blue workout mats, big red and orange exercise balls, weight racks and other devices. Wheelchairs and canes are lined up along the walls.

She was diagnosed with multiple sclerosis in 1999, and she now comes to the Chilterns MS Centre once a week for physical therapy.

On the day of our visit, she's in a group class. She's lying on her back, with an orange exercise ball under her knees. Her physical therapist wants Oatley to keep the ball still while she lifts her right leg off.

She groans as she lifts her leg off the large ball.

"It's hard for me to do; it stretches me because this is where my problem is, in the hip, and it hurts to do this action," she says, gritting her teeth. "It's a tough exercise for me."

Oatley pays the equivalent of $30 a week for her physical therapy sessions at the center. And it's a donation, not a fee. The Chilterns MS Centre is run by a charity, with some government funding.

The United States spends on average $6,402 per person annually on medical care. Great Britain spends a little over half that — while providing health coverage for all residents and scoring higher than the U.S. on basic measures of good health, such as life expectancy. Compare the systems.

But Oatley has never seen a bill for the rest of her medical care, such as her prescription drugs, doctors' appointments, MRIs and lab tests. That care is paid for by Britain's National Health Service. It's a government-run system, funded by income taxes, that provides health care to all residents.

After Oatley's workout session, she grabs a cup of tea. Sitting on a bench outside the center, she describes what happened to her nearly 10 years ago.

"I felt these odd sensations, in both legs actually," she recalls. "This is weird, but it felt warm on the inside, and when I would take a bath or a shower, the hot water felt cold and the cold water felt hot."

She made an appointment with her general practitioner, who promptly referred her to a specialist.

"He recommended, that very day, an MRI scan, a pulmonary function test, an X-ray and a blood test," she says. "And so all that was done that afternoon, and I went back the very next week for the results."

A Delay In Treatment

When Oatley was first diagnosed, there were several new drugs available in the United States that were thought to slow or stop the disease, at a cost of thousands of dollars per month.

But in the United Kingdom, the National Health Service was waiting for more data on the effectiveness of the medications. So Oatley paid for one of the drugs, Copaxone, herself at first. Then the NHS approved the drug for her type of MS.

At that point, the NHS gave her Copaxone free and delivered her prescription to her home every month.

"And they gave me my money back," she adds. "So they reimbursed me the 5,000 pounds I had spent. How cool is that? I thought I'd died and gone to heaven." 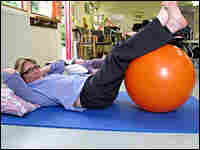 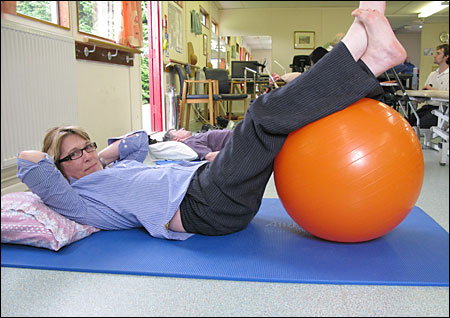 Medically, she's happy with what she's getting now: twice-yearly appointments with a neurologist and prescription drugs delivered free to her home.

And if she has a flare-up, she can go to the doctor without a wait.

Her only gripe is that the NHS provides only a limited amount of physical therapy, and that's why she's at the Chilterns MS Centre.

Oatley's situation is a stark contrast to that of Americans diagnosed with MS who have limited or no health insurance. They have to wait more than two years before Medicare, the federal health insurance plan, will pay for treatment. When Congress and the president expanded Social Security and Medicare to the disabled in 1973, they put a two-year waiting period onto Medicare to keep costs down.

Oatley is appalled to hear this. It would be overwhelming, she says, to be diagnosed with such a potentially devastating disease — and then to be left on your own to figure out how to pay for medical care.

"I wouldn't know where to start," she says. "I would think it would be just so mentally debilitating. I think I would have topped myself. That's a euphemism for killing yourself."

She asks, what do Americans in that situation do?

Those without insurance often find themselves in a two-year waiting period.

Jeffrey Rubin, a 41-year-old living in northeast Philadelphia, was diagnosed with MS in 2006. Two years later, he spends most of his days in a rented house, taking care of his 4-year-old daughter, Taryn.

He and Taryn read together and practice numbers and the alphabet, until his three other children come home. But there are no trips to the park. Even with a cane, Rubin can walk only half a block.

Rubin's medicines are lined up on a high shelf in his kitchen.

He takes about nine medications for his disease. Every day he injects Copaxone, which slows down the course of the disease. It costs about $2,000 a month. He takes a twice-a-day pill for his back. That prescription costs more than $200 a month. A drug for migraines costs $400 a month. A lot of the medicines make him feel even more tired, so he takes one to help keep him awake — that costs $1,000 for a month's supply.

When Rubin was in his late 30s, he felt pretty comfortable with his life. He supervised quality control at a medical packaging company. He had health insurance. His wife, Kristin, was a homemaker, and they had bought a house a few blocks from where he went to high school.

He had his first MS attack Memorial Day weekend in 2006. He was working a midnight shift, when suddenly a big black circle appeared in the middle of his visual field. The left side of his body went numb; the right side was riddled with pain. He went to the hospital, and while he recovered somewhat from the attack, he was no longer strong enough to work.

He eventually lost his job, and he couldn't pay for his health insurance on his own.

He recalls thinking, "I don't have the money. I'm already paying, of course, my mortgage, utilities. What am I going to do? I don't know what to do now. Everything just came closing down."

He asked for money from his elderly parents and borrowed money from friends. Neighbors and strangers dropped off food. His doctors gave him drug samples, but not enough. He came up with strategies to make his drugs last longer, but that worried him.

"If I don't take all my medications, who knows what's going to happen?" Several studies have shown that stress can make MS worse.

Rubin did get Medicaid, state medical assistance, but none of his doctors belonged to the program. When he went to fill his prescriptions, the pharmacies said he wasn't covered. He stopped paying his mortgage so he could pay some of his medical bills. Then the mortgage company claimed his house.

Rubin is one of 250,000 people with disabling conditions such as MS, cancer or schizophrenia who are stuck in this waiting period without insurance, according to an estimate from the Commonwealth Fund.

Recently, Kristin Rubin got a job with the charter school the kids attend, and the family now has health insurance through her job. But the insurance comes with co-payments, and since Jeff gets a lot of care, the co-payments add up.

He admits he once contemplated suicide — as a way to ease the financial burden on his wife.

So the scorecard comes to this.

Linda Oatley of Buckland, England, had several months' delay in getting coverage for a new treatment. She also has to pay a small fee for weekly physical therapy. Overall, she's happy with the National Health Service.

"In the end, if you ask the right questions, go to the right places, you can get the care you need from the get-go," she says.

And the scorecard for Jeff Rubin? A year and a half of cutting drug dosages, a repossessed house and bankruptcy.

A few years ago, he wouldn't have supported a British-style system, with its slower drug approvals and limited ability to pick your own doctors.

Now, he feels differently. He says his healthy friends might not agree, but the free care from the start that Linda Oatley got and the ability to focus on his illness and not his finances sound pretty good.

"Unless you fall into this type of situation, you just don't understand it," he says.

Rubin's two-year waiting period is up in December, at which point he'll receive health coverage from Medicare.