Accessibility links
China, Congo Trade For What The Other Wants China will build the Democratic Republic of Congo a much-needed 1,000-mile highway in exchange for access to mining. But details of the deal are making some local officials and business owners uneasy.

Listen
China, Congo Trade For What The Other Wants

The third of a five-part series. 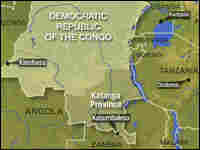 The highway begins in Kasumbalesa in the southeast of the Democratic Republic of Congo and will extend to Kisangani in the north. Planners also want the highway to reach the western port city of Matadi, though the exact details of the route have not been released. Alice Kreit/NPR hide caption 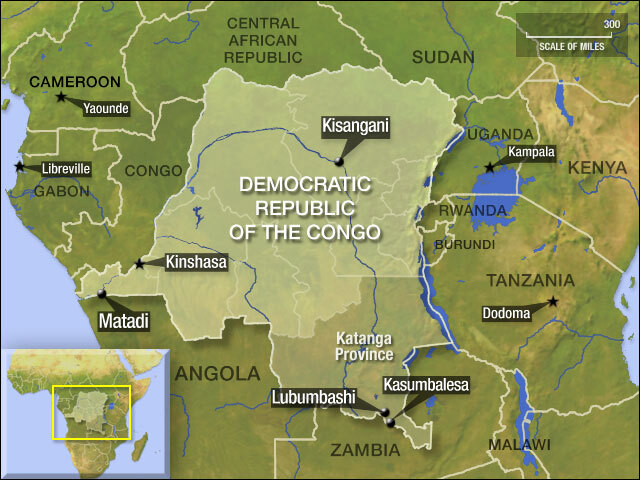 The highway begins in Kasumbalesa in the southeast of the Democratic Republic of Congo and will extend to Kisangani in the north. Planners also want the highway to reach the western port city of Matadi, though the exact details of the route have not been released. 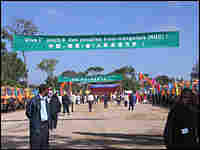 The Chinese Railway Engineering Co. is building a 1,000-mile road across the Democratic Republic of Congo. The celebration of the opening of the highway carried signs reading "Long live the friendship between the Chinese and Congolese people." Gwen Thompkins/NPR hide caption 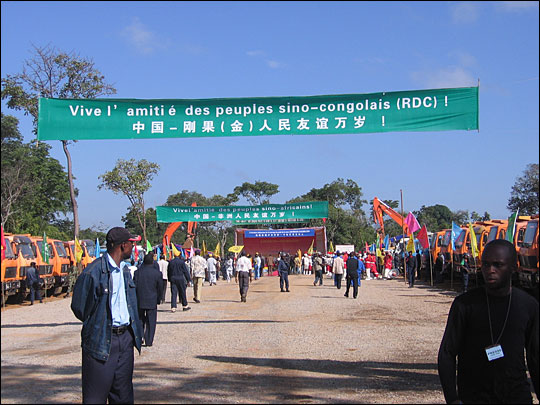 The Chinese Railway Engineering Co. is building a 1,000-mile road across the Democratic Republic of Congo. The celebration of the opening of the highway carried signs reading "Long live the friendship between the Chinese and Congolese people."

China's role in Africa is becoming increasingly important and controversial.

In recent years, China's trade with the continent has reached more than $55 billion and continues to grow, with predictions that it will double by 2020, if not before.

China is now Africa's third largest trading partner. But as its profile has grown on the continent, so have concerns about Beijing's hands-off policy on internal affairs and human rights issues, from Sudan to Zimbabwe.

Read more in this series.

A celebration marks the opening of the first part of the Chinese-built highway in the Democratic Republic of Congo. Gwen Thompkins/NPR hide caption 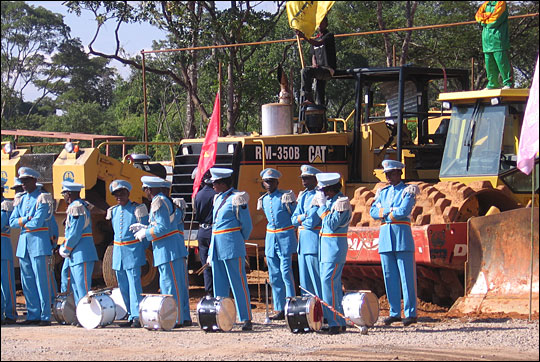 A celebration marks the opening of the first part of the Chinese-built highway in the Democratic Republic of Congo.

The Democratic Republic of Congo and the Chinese government have made themselves a sweet deal.

China needs copper and cobalt for construction projects at home, and Congo needs the wherewithal to build a transportation network. Each has what the other wants, and the details of their $9 billion ore-for-infrastructure barter are sketchy.

This is making Westerners nervous, as China has become the power to beat for natural resources on the African continent.

On one recent day in the southern province of Katanga, near the Zambian border, an announcement is set to please the powerful — there are lawmakers and majorettes, celebrities, a red carpet and a raised stage. Chinese construction workers in baby blue jumpers are setting the Chinese flag just right. And Congo's President Joseph Kabila is wearing a black leather jacket with a Mandarin collar.

This is the day Congo and its Chinese partners unveil plans to build a 1,000-mile road from the Zambian border to northeastern Congo. The folks in Katanga are excited about the first 45 miles.

"We want to stress the support and solicitude of the government of China and its assistance in the reconstruction of this road and the restoration of the mines in Congo," says Liu Kong Hong, the head of the company that will build the road.

The Congolese expect to get more investment in their country from China than they have received from any single Western interest in years, and Congo desperately needs infrastructure.

After 30 years of government-sanctioned thievery under Mobutu Sese Seko, the country is literally in the hole. The roads have divots big enough to store luggage in.

"Since the reign of Mobutu — the roads were not repaired in 32 years," says Charles Birindwa, a border patrol officer stationed near where Congo meets neighboring Zambia.

Hundreds of trucks cross every day on this road, loaded with ore and much-needed food imports. One pickup heading north carries more than 50 mattresses, stacked like a traveling road show of The Princess and the Pea.

'There Is No Transparency'

But not everyone in Congo is excited about this deal.

"For me, it's not clear how they will do their business here. There is no transparency," says Guy Sevrin, the Belgian consul general. He and others suspect that the Chinese are not competing by the same rules as the other local mining interests. They also worry that China's billions could end up unaccounted for in Congo, where corruption is rife.

"If there is a deficit of information, you don't know what to think. So you become suspicious," he says. "You think they are doing things behind your back."

But the money isn't free — it will take the form of loans to the Congolese government. Congo will pay back China with copper, cobalt and road tolls until China recovers its investment. Once the money is paid off, the two countries will split Socomin's profit.

"They couldn't give two hoots about this loan," says John Skinner, who runs a mining and road works company here. He says the deal means much more to China than money ever could. "This money is part of the mega-surplus that China gets from trading with the U.S. They don't know what to do with this money. And $9 billion is not a big amount of money to the Chinese."

China Comes Out Ahead

Skinner says he believes China will come out far ahead.

"Look at the benefits they're getting," he says. "They're getting to do infrastructure with Chinese companies, they get a stake in a mine that guarantees a huge amount of copper into the future for Chinese industry, and it gives them a serious foothold in Africa."

Says one exasperated mining executive, "We invest in their country during the worst of their civil wars, and this is how they repay us?"

Moises Katumbi, the provincial governor in Katanga, says that while the West helped bring about democratic elections in Congo, economic investment has been slow. But the Chinese come checkbook in hand.

"You are the governor. You put yourself in my place," he says. "You don't have road. Are you going to refuse?"

Congo's leaders stress that they are open to doing business anytime, with any nation. And that suits Liu Kong Hong just fine.

"We can also do other projects, because there is a lot of projects here," he says.

After the road ceremony, Liu and other Chinese company executives smoked cigarettes and drank soda pop in their construction offices nearby. Liu and his colleagues talked mostly about the road they are building, but perhaps the map on the wall belied China's greater ambitions for the continent: It was a map of Africa, written completely in Mandarin.