Accessibility links
Mr. Phelps' Mission: Saving U.S. At The Olympics The United States faces tough competition in individual sports, and athletes from other countries now dominate contests in which Americans once excelled. But then there's swimming champion Michael Phelps, the great U.S. hope in this summer's Olympic Games. 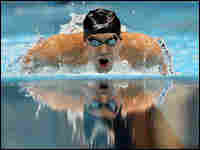 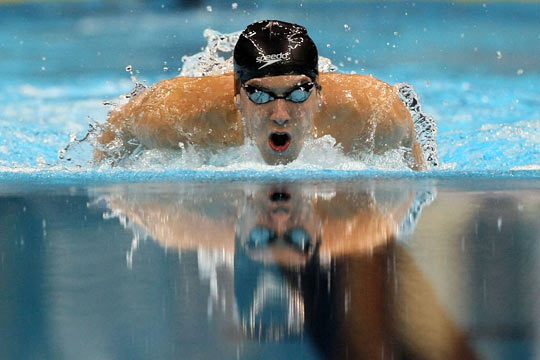 Michael Phelps is bidding to win a record eight gold medals in Beijing.

A boxer who learned about winning by competing in family fishing tournaments and a mother with a passion for weightlifting are among the athletes heading for the summer games.

Who woulda thunk it? The United States of America, that noble bastion of individualism, is bombing in individual sports.

The current Wimbledon officially certifies that American tennis no longer exists except for that one family, name of Williams. Tennis — especially that played by people with a Y chromosome — has become pretty much a wholly owned subsidiary of what Donald Rumsfeld called "old Europe."

Now that Tiger Woods is sidelined, the leftover golfers from the old United States ... well, if they were companies, they'd be the ones dragging down the Dow Jones index right now. The world's fastest human is a Jamaican. The world's heavyweight champions are Ukrainian and Nigerian, and the most talented boxer is a Filipino.

Yes, my fellow citizens, even as July Fourth is upon us, whoever would've thought that globalism would mean that the United States would outsource blue ribbons and gold medals?

But don't give up hope, America, because holy Johnny Weissmuller, look! Into this vacuum comes splashing ... it's a man, it's a fish, it's ... Michael Phelps. History tells us that Baltimore saved the nation in 1814 — "Our flag was still there!" — after the British burned Washington. History tells us that Babe Ruth left Baltimore, going forth to save the National Pastime after the World Series in 1919 was fixed.

Now in 2008, history is prepared for young Mr. Phelps to come out of Baltimore this century and not only save our national athletic honor, but, by the by, also save the National Broadcasting Company's ratings.

You see, it isn't just that Phelps is our great bright hope at Beijing. Time itself is on his side. Because Beijing is halfway round the world, NBC must present most all competition in prime time, insipidly, on a delayed basis. Even the premiere Olympic sport, track and field, will appear here on television hours after the results are known.

Who wants to see reruns of runs already prerun? But as a sop to the fading Yankee dollar, the Chinese did agree to schedule swimming in the morning — evening over here — so, at least for those viewers residing east of the Mississippi, the action in the pool will be authentic.

Phelps, who swam for six gold medals in the 2004 Olympics and seven in the world championships last year, is bidding to win eight this time. That would break the fabled record of seven that Mark Spitz accumulated in 1972. The challenge has been joined this week at the Olympic trials, where Phelps is off to a smashing start as he seeks to qualify in enough events in order to beat history in Beijing.

So much is NBC counting on Phelps to supply both live drama and real glory in August that it is hyping him now by showing four nights of the swimming trials in prime time. Bob Costas has already advised Phelps on air that he bids fair to join Michael Jordan and Tiger Woods as a consecrated American demigod.

But, heaven help us, should Phelps somehow fail to qualify for enough races so that he can't chase Spitz's record, NBC might just as well bag the whole 2008 Olympics and cry out: Everybody, outta the pool!