Accessibility links
Firewater Finds Joy Abroad The current political situation sent Firewater's Tod A. around the world to discover more music and culture. The musicians he met inspired him to return home and share what he gained. In an interview and performance from KEXP, Tod A. reveals the fruits of his travels. 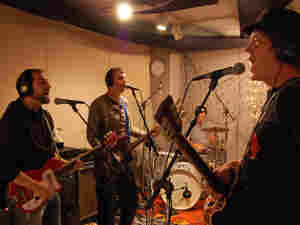 Truth be told, this in-studio performance almost didn't happen. Normally, I don't schedule sessions during our pledge drives when we spend 15 hours a day on air, literally driving ourselves crazy.

But I had been looking forward to Firewater's performance for a long time. It had been five years since the band released original material and three years since they'd put out anything at all. During that time, Firewater frontman Tod A. had been traveling through Thailand, Turkey, Pakistan, Israel, and India, gathering new experiences and influences and recording musicians along the way. While I have been a fan since the beginning, I knew immediately when I first heard the album The Golden Hour that it was special, and was sure to be one of my top albums of 2008.

The lineup of Firewater changes frequently, but Tod A. never fails to attract the most talented musicians from all corners of the world. This time around was no exception as he brought with him Johnny Kalsi, a British Indian Dhol player; Erik Sanko, a renowned bass player from New York; guitarist Yaro Milko from Basel, Switzerland; Reut Regev, an amazing trombonist originally from Tel Aviv; and the French percussionist Jean-Marc Butty, who has recorded with PJ Harvey, among others. Everyone brought something unique to the performance, but not always from their own cultures. Just listen to Milko's astounding Eastern guitar riffs on "Electric City."

In my conversation with Tod A., he confirmed my impression that The Golden Hour was a joyful album. The sense of freedom he found on his travels permeates the songs, even when they're bitingly critical. After all, it was our current political situation that sent him abroad. But it was the musicians he played with there who inspired him to return home and share what he had gained. Even at KEXP, he inspired us all to share: As a chorus of KEXP staff and volunteers, we were momentarily all members of Firewater on the set closer, "Borneo."

Firewater: Blowing Up the Laboratory June 18, 2008