Accessibility links
Mount Rushmore Now Offers Pre-Carving History Visitors to Mount Rushmore expect to see the carved faces of four U.S. presidents. But a new exhibit of a Native American village may come as a surprise. The exhibit describes life in the Black Hills, land sacred to the Lakota Sioux, before the stone carvings. 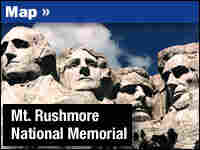 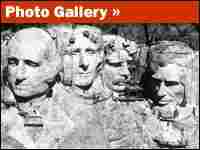 Share your photos of family vacations in the national parks in the NPR National Parks Flickr group. We will post a sampling of your submissions later in the week.

One thing you expect to see when you come to Mount Rushmore is the carving of the faces of four U.S. presidents. What you don't expect is a Native American village. But this year, that's exactly what you'll find.

"When I came in four years ago as the new superintendent here, one thing that I started understanding was the need to update more people about the history of the Black Hills," he says, standing next to the newly erected Native American village, just off one of the memorial's main walking paths.

Baker says it's been a lifelong dream to establish a place where visitors could learn about the history of these Black Hills — before faces were carved into one of them and called Mount Rushmore.

Betty Street, a member of the Chippewa tribe, tells visitors how American Indians traditionally used parts of a buffalo that she has spread out on a table beside her — the hide, horn, tail and even a bladder.

Street says reminding visitors about the area's original occupants is a part of the Mount Rushmore experience that has been missing.

"It is important because people forget that they owned this land, and that it was very important to them culturally," Street says.

Sitting on buffalo robes beside a cold campfire inside one of the village teepees, Eugenio White Hawk explains the cultural significance of this portable animal-hide house.

"While we're sitting around them campfires in the wintertime — or any other time — this is where we get all our stories from the elders. The stories that are very important to our people — stories about how the earth was created, how the Lakota people, the man, came upon the Earth," he says.

White Hawk is Oglala Lakota from South Dakota's Pine Ridge Reservation — about 100 miles away. While he's happy to share information about his culture with visitors, his primary concern is explaining just how sacred the Black Hills are to his tribe and others.

"We're a religious people here. So, I mean, if the white people could understand that, I think that our world would be a lot better," he says.

Mount Rushmore's message, then, isn't conveyed just from the faces of famous U.S. presidents immortalized in stone. It's also about Native Americans and their relationship with the Earth.

Ten-year-old Connor Leech is visiting from Maine, and he seems to be getting the message.

"It's kinda nice that they're doing that, because the Indians do have a right to be here," Leech says. "I mean, this was their sacred mountains."