Accessibility links
Massachusetts Moves Toward Mandatory Insurance A new state agency is determining the minimum health insurance plan that all Massachusetts citizens must buy by 2009. Will Massachusetts face a consumer revolt, or will it lead the nation closer to universal coverage? 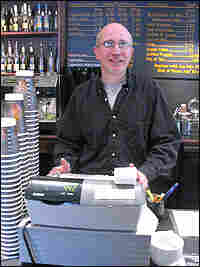 Paul Lovegreen owns the Tunnel City Coffee Shop in Williamstown, Mass. Like many other small-business owners in Massachusetts, Lovegreen will be required to provide health insurance for his employees starting this summer. Richard Knox, NPR hide caption

Jonathan Gruber, an MIT health economist, outlines how the Massachusetts program aims to provide affordable new health insurance options for the uninsured — and explains why he thinks citizens should embrace the plan. 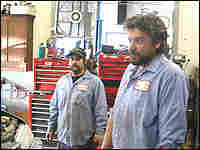 Co-owner Scott Beverly (right) and mechanic Chad Bulger at their auto repair shop in Williamstown, Mass. Beverly is upset that the state is mandating health insurance coverage — he believes it should be a personal choice. Richard Knox, NPR hide caption

Massachusetts' landmark health care law is the first in the nation to require individuals to purchase health insurance. The new program's main features and timelines:

Health care reform is back on the U.S. agenda. On the national level, it's all talk. But things are already happening in some states.

No state is farther along than Massachusetts, which passed a landmark health reform law last year — with bipartisan support. If health reform succeeds here, it could be a national model.

All state citizens are being told they must buy health insurance. If they do, everybody will get the care they need, and the cost will be spread across a wider base

The new law's implications are beginning to sink in, as people across the state face a July 1 deadline to purchase some form of coverage.

Paul Lovegreen runs the popular Tunnel City Coffee Shop in Williamstown, Mass., a picture-book community nestled up against the Vermont border. His coffee is roasted on the premises. The cookies and cakes are baked here. And Lovegreen insists on just the right consistency of foam for each cup of cappuccino.

Lovegreen makes his living cup by cup. He doesn't have a lot of margin for additional costs. Even so, the state is telling owners like Lovegreen, who employ more than 10 full-time workers, that they have to offer health insurance.

Lovegreen has reservations about the new law. He says it might make him think twice about hiring additional full-time workers. But when pressed, he says he's for it.

"I mean, any way that folks can get health insurance, it's a positive thing," he says.

That's understandable. After all, if employers don't start offering coverage by July 1 — and paying at least one-third of the premium — they'll have to pay the state a penalty for each full-time employee.

"As a small business owner, if I was going to get a penalty of $300 per employee every year," Lovegreen says, "I couldn't do it."

And the philosophical aspect? "I really think people need to be insured," he says.

Not all business owners are so positive. Some have threatened to move to New Hampshire. But so far, the new law hasn't caused business owners to rebel — unlike the last time Massachusetts pushed health insurance for all, back in the late 1980s.

Largely that's because, this time, most of the onus falls on individuals. The law requires every citizen to buy some coverage beginning July 1. Those who don't will lose their personal exemption when they file their income tax returns next year — a penalty worth about $200.

That's not the end of it. By January 2009, Massachusetts wants everybody to have meaningful insurance, with preventive care, necessary prescriptions and protection against catastrophic bills. No other state has tried to legislate that.

Across town from the Tunnel City Coffee Shop, Scott Beverly of Flamingo Motors is taking apart the front end of a Land Rover. Its owner will pay $600 for the brake job. But that doesn't mean Beverly — co-owner of the three-man repair shop — can afford regular medical care.

During a break, Beverly says he and his co-owner, Kevin Leonard, sometimes compare their repair business to health care.

"If you sat down and figured out what the doctors or any of the health care providers are charging per hour, it would really kind of freak you out, compared to what a normal automotive garage gets an hour," he says. "It's $75 for a 15-minute consultation."

"I haven't really gone for any checkups or anything because I can't afford it," he says. "So if anything major pops up, I just go to the emergency room and then just pay for it out of pocket. Unfortunately, I've got a good example. Six months ago I had a piece of metal behind my safety glasses and I had to go get that removed. That was $950, just to get a little sliver of metal out of my eye. Everything turned out fine but ... I paid it off with what I could monthly."

Beverly has mixed feelings about the new Massachusetts law.

"I think it's a good idea," he says. "But I don't think it's going to be really affordable for a lot of people."

Under the Massachusetts law, the state subsidizes coverage for low-income people — those making less than 300 percent of the federal poverty level. That's about $30,000 for an individual and $61,000 for a family of four. But Beverly makes about $45,000 a year. So he doesn't qualify for subsidized coverage.

And he's not happy the state's telling him he has to buy it on his own.

State health officials are worried about people like Beverly. They say the worst thing that could happen is a citizen revolt.

To head that off, Massachusetts will exempt some people from the requirement. But they can't go too far. Insurance works on the idea that everybody participates, healthy or sick. If too many people aren't paying premiums, the cost goes up for those who do. So the state knows it can't require people to buy something if they don't consider it affordable.

Meanwhile, the state has negotiated with private insurers to develop a menu of new health plans. They've created new options for individuals and self-employed people, who have been priced out of the market before now.

For a 35-year-old man in western Massachusetts, the monthly premium for one of these new plans will be around $150 to $200.

Beverly is thinking about whether he can afford that.

A new Massachusetts law is requiring nearly every resident to buy health insurance, or face a penalty. Jonathan Gruber is a health economist at MIT and one of 10 members on the board of the Connector, the new agency charged with implementing the state's 2006 law. Here, he outlines how the program aims to provide affordable new health insurance options for the uninsured – and explains why he thinks citizens should embrace the plan.

Jonathan Gruber: What's going in Massachusetts is an attempt to solve really the three issues that stand in the way of universal coverage. The first is giving people a place to buy their health insurance. Right now, if you work for a large firm, you're offered a variety of choices of health insurance, and you pay some of the costs and your employer pays the rest. But if you're unemployed or self-employed or work for a small firm that doesn't offer health insurance, you have to go buy it in what's called the nongroup insurance market, where prices are very high and they're unpredictable. In many states, if you get sick, they can raise your price through the roof the next year or just drop you from coverage altogether.

So the first issue we're trying to address here in Massachusetts is to give people a place to go to buy health insurance in the same way that people in large firms have it. And that's called the Connector.

And the third thing we're doing is, we're saying look, if we want to have a universal coverage system, we need everyone to participate. And so we're going to mandate that everyone buy at least a minimal level of insurance coverage — so that everyone participates in the system, and so the healthy and sick come together to form a system that works for everyone.

Are there rules of thumb among household economists about what portion of income it's reasonable to spend on housing, food and health insurance?

I think an important fact to remember is that as Americans, we're now spending over 16 percent of our income on health care. So ultimately, we have to recognize that the lower we push down what people have to pay out of their own pocket, the more someone else has to bear the cost. And I think while people may find a number like 10 or 12 percent of income very scary, that's still less than the nation as a whole pays as a share of its income for health care. I think we have to remember that health care is a very expensive proposition.

Are you worried about a backlash when this actually begins to happen?

We're very worried about that. I think the people on the Connector board are incredibly dedicated to making this work for everyone in the state. We're not sitting in our ivory tower, just thinking about what we think is right, and not worrying about how people are going to react and how it's going to affect them.

Is there some way to market that idea?

How do you market altruism? How do you market solidarity? It's an excellent question. I think the best way to market it is, unfortunately, just confront people with the facts of the randomness of health care. That, you know, my wife and I were perfectly healthy and five years ago she got breast cancer. And we spent an enormous amount on health care over the last five years. The insurance companies lost a huge amount of money on us. But five years ago, we were losing tons of money on our insurance. We were paying for insurance every year and not getting anything for it. You can't know what is going to come up.