Accessibility links
In The U.S. And Holland, Diabetes Looks Different The Netherlands' health care system resembles a giant HMO in many ways. Unlike in the U.S., however, Dutch citizens are universally insured, and the system is organized around encouraging preventive care for patients with chronic illness.

Listen
In The U.S. And Holland, Diabetes Looks Different 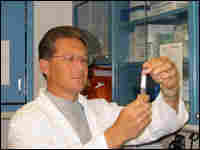 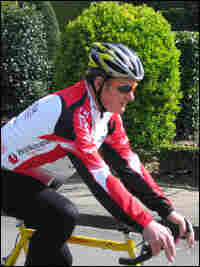 Rene Thain, an avid bike rider, says he's been impressed with the care from the diabetes clinic in the Netherlands. Sarah Spivack/NPR hide caption

Two years ago, the Netherlands redesigned its health care system. The reform was developed by Alain Enthoven, the U.S. economist who created HMOs. It resulted in a Dutch health care system that closely resembles a giant American HMO. Unlike in the U.S., however, Dutch citizens are universally insured, and the system is organized around encouraging — rather than discouraging — comprehensive care for patients with chronic illness.

Dr. Steve Edelman, 52, a diabetes specialist at the University of California and founder of a Web site called Taking Control of Your Diabetes, knows all too well that this isn't the case in the U.S.

Diagnosed with Type 1 diabetes at 15, he chose to become an endocrinologist in order to counteract a system that continually let him down. No one educated him about the importance of preventive care.

"I didn't realize a lot of things were needed — yearly eye exams, cholesterol tests. It took me 10 to 15 years to finally realize what I needed to do to avoid terrible complications of diabetes," he says.

By then he had developed eye disease and kidney disease. Looking back, however, he blames insurance companies more than doctors.

"Doctors have to jump through so many hoops to get medications and treatments approved for patients, they often just give up. It's not that they want to do that; it's just that they don't have the time to fight for each and every patient."

Even as a doctor, Edelman says he struggles to get his insurance company to pay for basics such as an insulin pump.

"I know how to get around the system; I scream, yell, know the key words and even I have had a hard time getting some of the things I need to control my diabetes. I can't imagine how it is for a layperson who doesn't know the key words."

Dealing With Diabetes In the Netherlands

On average, the U.S. system spends about $6,000 per person on health care, including whatever the government, employers and individuals pay out of pocket. For less than half that — about $2,700 — the Dutch get better care, research indicates.

Take the case of Rene Thain, 62, a retired salesman from Maastricht. A few years ago, while on vacation with his wife, Thain developed a painful condition that caused his toe to get increasingly bigger and redder.

Thain's doctor immediately sent him to endocrinologist Nicolaas Schaper, who heads the Diabetes Center at University Hospital in Maastricht. Schaper diagnosed Thain with a rare complication that occurs in diabetic patients who no longer have feeling in their feet. A minor injury can cause so much blood flow that ligaments disintegrate and bones weaken and crumble. If not properly addressed, the condition can cause ulcers and result in amputation.

Unlike Edelman back in the U.S., Thain did not have to pressure, cajole or argue with an insurance company to get immediate effective care. Instead, he was promptly referred to a clinic for diabetes patients with foot problems. There, a multidisciplinary team, which included an orthopedic surgeon, internist, rehab doctor, shoemaker and plaster technician, helped him address the problem.

Thain wore a plaster cast for about four months. Today, his foot is pretty much back to normal, a success Schaper credits to a system that is geared to kick into action as soon as problems occur.

About 10 years ago, health economists predicted an epidemic of diabetes in the Netherlands due to the same factors that drove the U.S. epidemic: too many high-calorie, high-fat foods and too little exercise. The government and the medical community responded by instituting a new system for diabetes care, which included training nurses to specialize in diabetes. Each group practice of family practitioners is required to have at least one.

The extra cost of care for chronically ill patients is covered by income taxes which finance additional fees that the government pays to insurance companies. This creates an interesting dynamic; one that's the opposite of what happens in the U.S. Because Dutch companies receive additional money for covering expensive, chronically ill clients, companies end up competing for their business. Furthermore, because companies can make more money on these patients by providing efficient care, the system reinforces effective treatment.

This is unheard of in the U.S., where patients can have inadequate insurance and be bankrupted by medical costs. Neal McGill, 43, a diabetes patient in Chicago, for example, has racked up thousands of dollars in bills, without getting the care that he needs.

McGill, who works in a warehouse lifting and moving heavy boxes, has no feeling in the bottom of his feet due to diabetes complications. One Saturday morning, he saw blood and discovered that a bottle cap had passed through his shoe, into his foot. After his doctor treated the wound, a severe, painful infection developed.

He went to the hospital right away, he says, but it was so severe that his toe had to be amputated and some of the natural padding on the bottom of his foot removed.

By the time that was done, he had surpassed the $1,500 allotment for hospital care under his insurance. When he tried to renew, the company refused.

Today, McGill pays out of pocket for treatment at Chicago's Rosalind Franklin University Hospital. He receives silicone injections to help build up the padding and reduce pressure on the foot, but "somewhere along the line, I developed a fused toe," he says. "The one toe after the toe they took off is fused, so I can't bend it. Every time I walk it's very painful."

Surgery would help, but McGill can't afford it. Nor can he afford a $675 diabetic shoe that would help stabilize his foot. He tried wearing a cheaper surgical boot instead, which ended up hurting more than helping.

"I would actually bang my toe or stub my toe on things that were in my way," he says. "It was hard for me to move around in the boot, and the boot is really heavy. I can't move my foot or maneuver like I would like to."

McGill would like to buy new insurance, but no one will sell to him at an affordable price. He doesn't qualify for disability because he's not disabled — enough. And he feels uncomfortable about low-income insurance programs like Medicaid which, to him, feel sort of like a "handout."

For now, he pays his doctor, Stephanie Wu, what he can, when he can.

"I do whatever I can, beg, plead for him," Wu says. "It's very frustrating because I feel like I spend more time writing letters to insurance companies than treating patients."

In the Netherlands, meanwhile, fewer than 2 percent of Dutch residents slip through the cracks.