Accessibility links
In Switzerland, A Health Care Model For America? Switzerland's health care system could be the perfect political compromise for the U.S. Those who can afford to buy insurance are required to do so by law. For those who can't, the government provides subsidies. Swiss citizens, such as Cecile Crettol-Rappaz, say they wouldn't trade it for any other system.

Listen
In Switzerland, A Health Care Model For America? 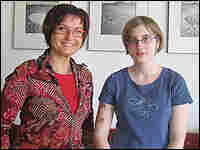 Cecile Crettol-Rappaz, seen here with her daughter, Anais, says she had high-quality, but expensive, health care while living in the United States. Her family's insurance in Geneva isn't cheap, but she likes that some of what she pays into the system helps others in need. Rebecca Davis/NPR hide caption

At first glance, Switzerland's health care system looks like it could be the perfect political compromise for the United States.

As Republicans would prefer, individuals — not employers or the government — choose from a broad array of health plans, sold by private insurance companies.

And as Democrats urge, everyone in Switzerland has health coverage (it's required by law), with the government providing generous subsidies for those who couldn't otherwise afford it.

So does it all run, to use a Swiss cliche, like clockwork? Yes and no.

Switzerland's 7.5 million citizens are, by and large, quite happy with the system.

"I wouldn't trade it for the world," says Nicole Bieri, an adult vocational education instructor from Lucerne. "I think it's a very good system."

But, as in the United States, just about everyone is quick to complain about one thing: rising costs.

"The costs have increased in the last 10 years by 50 to 60 percent," says Roland Brunner, a banker from Baden.

Indeed, while individuals feel that pain, so do Switzerland's politicians.

"They see it in their budget," says Peter Zweifel, a professor of health economics at the University of Zurich. "It's very visible because it's that budget chunk that needs to be reserved for the subsidization of premiums."

And the fact that that chunk of the budget grows each year has been particularly frustrating for members of the Swiss parliament, Zweifel says, because "those poor [who get the subsidies] are not those that go to the polls and give you the votes."

Still, Zweifel says that in the 1990s, when the current law was being drafted, it was the Swiss populace, by referendum, who insisted that the subsidies be included if there were going to be a requirement that everyone purchase health insurance.

"Surveys showed the population was skeptical," says Zweifel, who helped government officials write the law. "They began to figure, 'Hey, now the poor are forced in a system that quite likely will become more expensive as time goes on. They don't have a way to opt out anymore.' So pressure began to increase that the poor shall have [a] subsidy; personalized subsidy of the health insurance premium."

But even with the subsidy, there's still a regressive aspect of the Swiss system: health insurance premiums are not linked to income. So everyone pays the same.

"I pay what I pay, but my neighbor pays 400 francs also, even though she has a salary which is half mine, and that's unfair," says Cecile Crettol-Rappaz, who works in corporate communications for Migros, the country's largest supermarket chain.

Rappaz is in a particularly good position to compare the U.S. and Swiss systems. Not only did she live in the United States for several years — her husband is a videographer for Swiss TV — but they have a daughter with juvenile schizophrenia, so they have been heavy users of health care in both countries.

In the United States, she says, care was of high quality, but expensive. "What we found in Washington, D.C., was that it was easy to get good care, but everything costs a lot."

Once back in Geneva, she said it took some scrambling to get Anais, then age 11, settled into treatment, but once she did, things were much better.

"What we have found here is the best of what the public system can give to us." For example, when Anais needed to be hospitalized for five months, they were able to get her into a special facility for young psychotic children.

"That was paid by our insurance. And everything that has to do with her health is paid by that insurance."

Anais, who is now 17, also qualifies for Switzerland's disability insurance program, which is even more generous, says Rappaz.

"For example, our daughter gets three-times-a-week psychotherapy, and it's her fourth year," she says.

Twice a week, her daughter has therapy with horses, using repetitive body motions. And unlike the Swiss health insurance, which requires the family to pay 10 percent of the cost, the disability plan pays 100 percent.

Still, the coverage takes quite a bite out of the family budget. Rappaz keeps the bills in a three-ring binder. She pays 400 Swiss francs per month for her basic coverage; her employer contributes 60 francs toward that.

Under Swiss law, insurers may not make a profit on the basic plan, which is quite comprehensive. Individuals, however, can adjust their premium up or down by choosing a larger or smaller annual deductible, or by joining an HMO-type plan that requires them to choose a doctor in a network.

Since her husband, Bernard, rarely goes to the doctor, they have chosen a network plan for him; his monthly premium is only 298 francs. Children also cost less, so Anais and her brother Lucien's premiums for basic coverage are 89 francs each.

Where Swiss health insurers can and do make profits, however, is on supplemental coverage. This is for things like dentistry, alternative medicine (which is popular in Switzerland), and semiprivate or private hospital rooms. For 30 francs per month, Cecile and her husband have a supplementary policy that covers, "for example, all kinds of prevention, not-on-the-list medication, help at home, glasses, transport, alternative medicine. That's a good one," she says.

For another 105 francs each, they have another supplemental policy that guarantees them a semiprivate hospital room — and the possibility of a private, rather than a public hospital.

"We decided, Bernard and me, that if we have a huge accident or cancer, we want to have the best care or hotel room, so we can get into it because we pay these 105 francs a month. That's amazing how expensive it is," she says with a laugh.

The children also have supplemental coverage, although theirs costs far less — 14 francs per month for Lucien, and only 8 for Anais. That is because Anais was not able to get much extra coverage — insurers do not have to sell beyond the basic package to people with pre-existing health conditions.

So, all together, the Rappaz family — which is upper-middle-class, but far from wealthy — pays just over 1,100 francs per month for their health insurance. That's over $1,000 U.S. dollars.

Yet Rappaz looks puzzled when asked about people in the United States who say that it would be intrusive to mandate health insurance.

"I'm not sure that I get you," she says, cocking her head.

When the question is put another way, she laughs. "Oh, I see. That's really an American question. You are so used to having this individualistic way of thinking, and that's why you don't have these social [safety] nets. You still have this pioneer mentality where everyone has to take care of themselves."

That's not how people in Switzerland think about it, she says. That pioneer mentality, "is good for people who have no problems, but there are a bunch of people who ... need a social net.

"I'm really happy to give part of my salary to a solidarity system," she says.