Accessibility links
'Kite Runner' Star's Family Feels Exploited By Studio The child star of The Kite Runner faced harassment in his home country of Afghanistan before the film was even released. Paramount Pictures tried to relocate the boy for his safety, but his family believes the studio has not done enough to help. 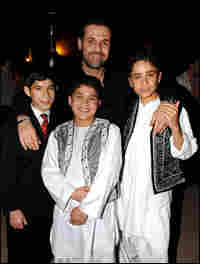 The Kite Runner's 12-year-old star Zakria Ebrahimi (center) had to be relocated from Kabul, Afghanistan, to Dubai because of harassment about his character in the movie. Andrew H. Walker/Getty Images hide caption 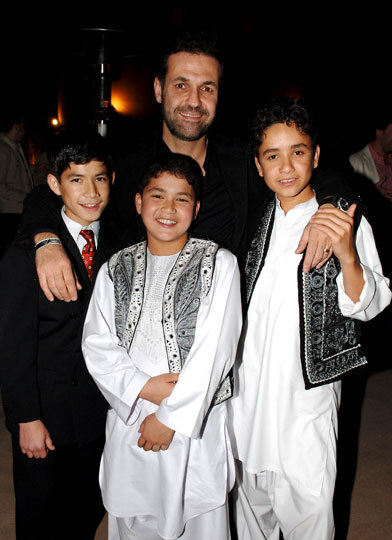 Author Khaled Hosseini poses with child actors who starred in the film version of his book The Kite Runner. Zakria Ebrahimi, the child in the center, had to be relocated to Dubai because of the harassment he received for his role in the movie.

The young actor, 12-year-old Zakria Ebrahimi, has been the target of threats from fellow Afghans who were offended by the movie, which includes a scene of child rape. The movie is banned in Afghanistan but nevertheless has circulated on pirated DVDs.

Paramount Pictures relocated four of the child actors in The Kite Runner to the United Arab Emirates for their safety shortly before the movie's release. But after months apart from his family, Zakria returned to Afghanistan. He is now unable to attend school or, for the most part, leave his house. His family believes the studio needs to do more to help.

In an opening scene, Zakria's character, Amir, asks his friend Hassan, the son of a house servant, to find the kite they won in a kite-fighting contest. "Don't come back empty-handed," Amir says.

Hassan, who is from the country's Hazara minority, is cornered during his search by a group of Pashtun boys, and raped. Amir, who is also a member of the Pashtun majority, witnesses the assault but does nothing to stop it.

Zakria was selected to play young Amir by director Marc Forster, who, striving for authenticity, went to Kabul to cast unknowns for his film.

Many Afghans who have seen The Kite Runner accuse the actors and Paramount of making a film that insults their country. They say the movie — banned or not — also has heightened ethnic tensions that have caused decades of conflict.

Fear that the child actors might be harmed by insurgents or mobs prompted Paramount to move four of them to Dubai in November, each with a guardian. The studio put the boys in a private international school, rented apartments for them, paid their families in Dubai and Kabul a monthly stipend, and searched for work for their guardians.

The guardians were required to sign contracts stating that the arrangements were subject to change if they spoke to the media.

Rich Klein, whose consulting firm, McLarty Associates, was hired by Paramount to help relocate the families, says the clause was meant to protect the boys' anonymity, not penalize them.

"The studio has, I think, gone above and beyond to accept responsibility for the safety and well-being of all of these boys and has left their promises to these boys open-ended," says Klein.

Waheeda says she and her nephew, whom she has raised since he was a baby, spent roughly four miserable months in Dubai.

She and Zakria worried he would be deported because his visa had expired, even though Paramount was working on getting him a new one. Waheeda says the small stipends and $400-a-month job she was offered were not enough for her to support her family.

So they returned to Kabul in March. It was then, she says, that the trouble began.

Zakria was pulled out of his Kabul school because Hazara classmates threatened to kill him, Waheeda says, breaking down into tears.

She says the family moved to a new neighborhood but quickly left after a gang of men tried to force their way into the home. Someone had distributed a dozen copies of The Kite Runner to her neighbors, each with a note describing where Zakria lived.

The family still lives in Kabul, but Zakria spends all of his time indoors. He is pale and rarely smiles. His uncle, a shopkeeper, is home schooling him.

Zakria says he wishes he had never done the movie and that he wants Paramount to get him and his family out of this mess. They want to go to America.

"I don't think anybody is happy with the fact that ... Zakria is not doing well," says Klein. "There's a very real concern."

But Klein says the family needs to be realistic about what Paramount can do for them. He hopes they will consider moving back to Dubai.