Accessibility links
War on Drugs Hasn't Stemmed Flow Into U.S. Despite decades of U.S. interdiction efforts, cocaine, heroin and other illegal drugs still stream into the country. Critics say America would improve its chances of "winning" the war on drugs if it revamped anti-drug policy to focus more on stamping out demand.

This is the first report in a five-part series. 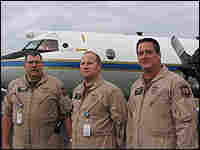 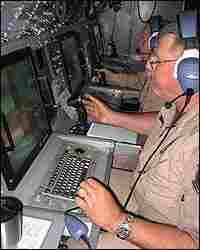 Williams uses radar inside a P-3 aircraft to look for drug boats on the waters off the Caribbean coast of Honduras. John Burnett, NPR hide caption 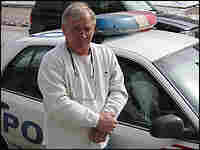 Sgt. John Brennan, who has served 27 years on the narcotics detail for the D.C. Police Department, says cocaine and heroin are as cheap and plentiful as ever. Marisa Penaloza, NPR hide caption

The big, silver airplane lumbers into the air from its base in Corpus Christi, Texas, clears a bank of thunderclouds and heads south over the shimmering Caribbean. It's part of the U.S. Customs and Border Protection's P-3 air interdiction force, aimed at stopping drug smugglers from moving their cargo from Latin America into the United States.

The sky outside is gray and drizzly, as federal agents in tan flight suits buckle themselves into a Lockheed Martin P-3 turboprop. When they spot something suspicious on the water, they swoop down as low as 500 feet for a closer look, then radio in the boat's location.

The P-3 air interdiction force has been successful, by its own definition. In 2005, it seized a record 105 tons of dope. But when asked whether he thinks they're making a difference in the drug war, Dan Williams, a senior detection systems specialist on board the plane, is equivocal.

"It's a tough question," he says. "We're catching people, but there's still stuff getting through." He adds, "We're hurting them, but I don't know that it's causing, you know, massive stoppage."

Williams says that what drives the drug trade is demand; all the interdiction in the world won't stop the flow of drugs.

"The money involved is too great," he says. "If we could stop all the demand in the States, I'd be out of a job. If we didn't want to buy it, it wouldn't be coming."

Williams' conclusions are shared by numerous studies that show interdiction on the high seas or at border crossings does not lead to a reduction in the flow of cocaine or heroin onto American streets. Both the Rand National Defense Research Institute and the Government Accountability Office reached that conclusion in studies more than a decade ago.

Interdiction does, however, accomplish some important things, says Donny Marshall, head of the Drug Enforcement Administration from 1999 to 2001.

"If you keep the traffickers off balance, you make it very, very difficult and expensive for them to do business, both in terms of money and in terms of the risk of incarceration," Marshall says.

Still, most analysts of drug policy and drug smuggling agree that successful interdiction has mainly pushed the problem around the hemisphere. When U.S. authorities cracked down on Colombian smugglers in the Caribbean in the 1980s, the traffic — and savage violence — shifted to Mexico. There, drug gangs killed an estimated 2,000 people last year. The drug trade has also moved to Central America, where countries like Guatemala are turning into narco-republics.

'Next to Impossible to Block Out'

These are the unintended consequences of an earlier enforcement surge, says John Carnevale, who served as a top budget official under four drug czars.

"We were very successful in the '80s in stopping trafficking in southern Florida, and around the Gulf and the islands, in terms of cocaine especially and marijuana," he says. "We shut it down. But we opened up the whole Southwest border because we simply moved the problem from one location to another. And so, what have you accomplished at the end of the day? Probably not very much."

Carnevale says the strategy now being used in Mexico — decapitating the cartels and extraditing drug lords — is an echo of what the United States did in the late '80s in Colombia with drug lords like Carlos Lehder, head of the Medellin Cartel.

"We captured or killed, basically, the head of every one of these organizations, only to discover years later that the organization just got fragmented," Carnevale says. "And it continued to thrive, because as long as there was a demand for this product, people will figure out a way to bring it to market, especially with the profits that can be made."

Just ask a smuggler. "There's always a way to get it into this country, one way or another," says Jim Barnard — "Barney" to his friends. He's a former drag racer and a convicted cocaine smuggler who did his time in federal prison. Now 63, Barnard lives quietly in Portland, Ore. One of the thrills of the old days, he remembers, was to think up new ways to out-fox the feds.

Defining 'Victory' in the War on Drugs

But the White House Office of National Drug Control Policy continues to believe that America is winning the drug war.

David Murray, a top policy adviser to drug czar John Walters, points to numerous indicators of victory: lowered drug use among teenagers; record seizures of cocaine in transit zones; the disruption of domestic methamphetamine production; and the recent extradition of 15 Mexican cocaine cowboys to the United States.

"We're saving people, and we're minimizing harm and impact," Murray says, adding, "If you take the magnitude of a problem that was burning high and hot and spreading, but you constrain it, you choke it down, push back against it, you make it smaller — that is, I believe, victory."

The federal government publicizes its victories in the drug war with frequent press releases and press conferences. Last February, for instance, Attorney General Alberto Gonzalez was in San Diego to announce a major Drug Enforcement Administration operation against a Mexican drug lord that led to 200 arrests and netted 18 tons of narcotics. Gonzales called the raid "a serious blow for one of the largest and most significant trafficking organizations."

But federal and state officials with long experience in prosecuting drug cases are not as sanguine about the progress they are making. Ken Bauman recently retired after 37 years as a federal prosecutor in Portland, Ore., with 800 drug cases under his belt.

The Battle on the Streets

If you judge that kind of victory by determining the availability of drugs, then the celebration is a long way off.

On an icy day in Washington, D.C., Sgt. John Brennan is in street clothes, with bifocals around his neck. He sits in a Washington, D.C., police department squad car, squinting at a familiar scene: a cluster of suspicious men in overcoats loitering outside a seedy convenience store in the Northwest section of the city.

The U.S. Capitol building, about four blocks away, looms in the background. Brennan gets a kick out of the proximity.

"We're looking directly south on North Capitol Street, looking at the dome — in session," he laughs.

Brennan is no drug-war dove. He thinks what the country needs is stricter judges and more jail cells. But, nearing the end of his 27-year career as a narcotics officer, he's frustrated.

"Cocaine used to be a very expensive drug, and it was sold as the powder form, the hydrochloride, where they used to freebase it or snort it," Brennan says. "Nowadays, it's crack cocaine. It's sold for $10 a bag. It gets you a better high."

The price has been $10 a bag, Brennan maintains, for at least 20 years. Heroin used to cost $20-25 a bag, he says, and came in forms less pure than what's available today. "Now you can buy a bag of heroin and the percentage [of pure heroin] is higher. And it's only $10 a bag."

Many of the anti-drug professionals interviewed for this series, even career cops, believe that U.S. counter-drug policy has relied too much on enforcement. Steve Casteel spent 32 years with the DEA, retiring as chief of worldwide intelligence.

"I believe the balance of the past, where the majority of the money went into the law enforcement, the sexy, five-o'clock-news type of stuff, should be reduced and balanced with prevention and treatment," Casteel says. "There needs to be a legitimate balance."

"If we're stuck with the War on Drugs metaphor, then like any war, it has to adapt to changes in the enemy," says Reuter, of the University of Maryland. "We now have the problem of endemic rather than epidemic drug use, and we need a strategy that reflects that."

Caulkins, of Carnegie Mellon University, concurs. "Smart drug control is hard work," he says. "There are no silver bullets. The best we can do is improve on the mix of interventions we're doing." And, he says, it's time for a change of policy. "We've allowed a set of policies that might have made sense in the 1980s to be locked in. A thorough top-to-bottom review of what we're doing in drug policy is long overdue."

But the challenge is that drug policy today must work with fewer resources. Because of the demands of the global war on terrorism, under the current budget proposal, spending for federal anti-drug programs would decline for the first time in 20 years. After 38 years, we've learned what works and what doesn't, Caulkins and Reuter say. Now, they say, it's time for a smarter War on Drugs.