Accessibility links
When a Legendary Coach Becomes a Friend Andy Hill rode the bench on great UCLA teams coached by the legendary John Wooden a generation ago. Hill never felt Wooden appreciated him or really even knew who he was. But as fate would have it, Hill has developed a deep and powerful friendship with the 96-year-old coach.

Listen
When a Legendary Coach Becomes a Friend

Andy Hill rode the bench on great UCLA teams coached by the legendary John Wooden a generation ago. Hill never felt Wooden appreciated him or really even knew who he was. But as fate would have it, Hill has developed a deep and powerful friendship with the 96-year-old coach.

The UCLA Bruins are back in the men's Final Four this weekend. For long-time fans, that stirs memories of the school's basketball dynasty of the 1960s and '70s, when the legendary John Wooden coached some of the best players in history.

Mr. JOHN WOODEN (Former Coach, UCLA Bruins Basketball Team): Alcindor Jabbar is the most valuable player I ever had under my supervision. There are those who would say well, I think Walton was your most valuable player, and they might put up an argument for it.

SIEGEL: That was John Wooden in a 1981 NPR interview talking about his star centers, Bill Walton and Lew Alcindor, who changed his name to Kareem Abdul-Jabbar. But for the past 10 years, Wooden has been nurturing a friendship with a former player who barely saw action when he was in college.

NPR's Tom Goldman has their story.

TOM GOLDMAN: On paper, Andy Hill had a heck of a college basketball career.

Mr. ANDY HILL (Former Player, University of California Los Angeles): I was a member of three national championship teams, one of 13 men in NCAA history to be three-time champions. The other 12 guys all played for John Wooden too.

GOLDMAN: But Andy Hill mostly watched. Mean-spirited Bruins fans called Hill the man who started 5,000 cars at UCLA games, because when he finally went in that meant it was basically over and time for everyone to leave. It stung as a six-foot-one guard on the bench waiting for a chance that rarely came.

So when Hill graduated in 1974, he wasn't feeling charitable toward Wooden, the man revered as the greatest college basketball coach in history.

GOLDMAN: Over the next 22 years, Hill says the two men had minimal and somewhat uncomfortable contact, but then it happened. One day in 1996 at the Encino Golf Course, Andy Hill stood over his ball and heard his buddy, Joe, say...

Mr. HILL: Get your balance. You know, you're not in balance, and you're hurrying your swing. Slow down.

GOLDMAN: Joe was talking, but the words were pure John Wooden.

Mr. HILL: Coach used to talk about balance and say be quick, but don't hurry, over and over and over again. And I just felt like Coach was there. It was really strange.

GOLDMAN: Hill drilled a 200-yard shot to within a foot and a half of the hole. He sank the putt...

GOLDMAN: For the golf tip, yes, but mainly for the lessons he learned in those three years on the basketball team. Hill didn't play in many games, but at practices he devoured Wooden's teachings about success and teamwork. On that golf course he suddenly realized he'd been using those teachings for the past two decades. Hill called his former coach, who invited Hill to visit.

No longer worried about playing time, Hill says his resentment started to fade. No longer coaching, Wooden's gentler side emerged. Around their fourth get-together, Wooden was talking about his key principles of leadership and how they included giving credit to people not in the spotlight. Hill said to Wooden: You didn't do that very well when I was stuck on the bench.

Mr. HILL: His response blew my mind, and I think this was really a moment where our relationship went to an entirely different level. He said Andy, if you say that's true, I'm sure you're right. I'm sorry. I wish I'd done better.

GOLDMAN: Hill is one of several former players who visits 96-year-old John Wooden regularly. The two wrote a book together and called it "Be Quick, But Don't Hurry." Hill's even gone with Wooden to religious services, prompting Hill to laugh: Imagine 12 years ago, the thought of this Jewish boy taking his old coach to church.

Wooden is a man of many sayings and quotes. Here's one that seems to fit the old coach and the Jewish boy. Sports don't build character, they reveal it. In the case of John Wooden and Andy Hill, sports have revealed a deep friendship as well.

SIEGEL: Tomorrow on MORNING EDITION, John Wooden talks about the beauty of old-school basketball. This is NPR, National Public Radio. 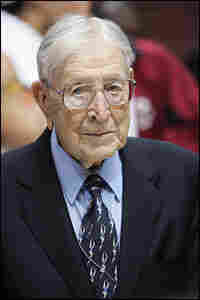 Wooden on Individual Athleticism vs. Teamwork

Wooden Discusses Life Since His Wife Nellie's Death in 1985 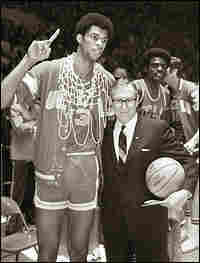 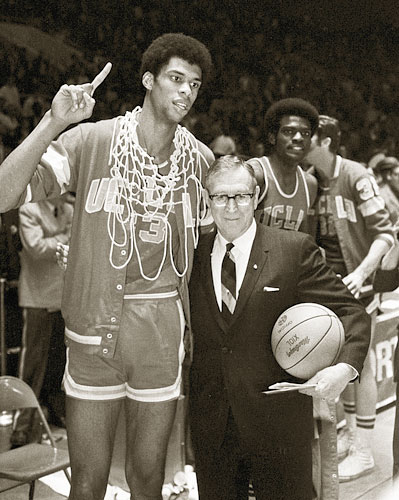 If you tune in to the Final Four this weekend, you can be sure that John Wooden is watching, too. The great college basketball coach is pulling for his old team, UCLA, though he's not in love with the way basketball is played these days.

No other team has come close to that record. So people still listen when he talks about how you coach.

Wooden says he had three basic rules for his players: Be on time for practice or class, no profanity, and never criticize another player.

Of the latter, he says, "That's the coach's job, not the player's. You do not criticize a teammate. I'll take care of that. I used to tell them, 'I'm paid to do that. That's my job and it's not yours.'"

Regarding UCLA's NCAA championship streak, Wooden disagrees with the notion that it's easier to get to the top than it is to stay there.

He also disagrees with people who think he'd rather be the underdog.

"Would you rather fight somebody that's whipped you twice, or someone that you'd whipped twice? There's no question in my mind, I'll take the one that I've whipped twice. I don't want to take another beating."

Wooden says he didn't give motivational speeches as his teams went into big games.

"No, I didn't believe in that — nothing fiery," he says. "I seldom was ever off my seat on the bench during the game. I'd tell them, 'Don't look over at me. I prepared you during the week. Now, do your job.'

"Bill Walton used to say while we were in the dressing room before we'd go in to play a game, whether it was the national championship or a regular season game, they'd have to send a manager out to get a program to find out who they're playing because I never mentioned the other teams.

"My concentration was always on developing ourselves — to work to the best of our ability. I think you have to be what you are. Don't try to be somebody else. You have to be yourself at all times."