The Federal Aviation Administration inspector general issued a stern rebuke to his own agency. Still, says The Wall Street Journal's Andy Pasztor, the U.S. safety record is excellent — for now. 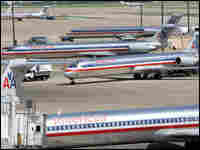 This week, the Federal Aviation Administration completed a three-month review of U.S.-airline maintenance, and they reportedly gave the airlines really good grades when it came to compliance with federal mandates. But another report, this one by the inspector general's office of the Department of Transportation, says the agency has gotten too cozy with the airlines, notably with Southwest. And it says the FAA is resisting some suggested reforms. Wall Street Journal reporter, Andy Pasztor, has been covering the story and joins us, I think, from the south of France, where he's on vacation. Hello, Andy.

Mr. ANDY PASZTOR (Reporter, Wall Street Journal): Nice to be with you. That's right, that's where I am.

PESCA: So, did you walk there? Knowing what you know about the airlines?

Mr. PASZTOR: No, I flew there, and I flew there with absolutely no trepidations that I was going to be in an accident. And that's one of the ironies of what we're talking about, but we can get into some of the statistics and reasons for that.

PESCA: In 2006, a Comair flight crashed during takeoff, in Lexington, Kentucky. It killed 49 or 50 onboard. It's been almost two whole years since then without a fatality in a commercial-airline crash. That seems like a pretty impressive record. Is it?

Mr. PASZTOR. It's an extremely impressive record and actually, if you do the math a little bit differently, the rolling average for three years, if you take the last three years and say what the fatality rate is, it comes to one fatal accident per 15 million takeoffs, which is a phenomenal number, the best ever that the U.S. has ever rolled up. And this is the dichotomy that we're dealing with. The statistics and numbers had been fabulous really for the past five or six years, but there are all these underlying potential problems, from runway incursions to fuel tank explosions, to lax maintenance, to pilots that are - who are too tired. And the problem is, these are all incipient issues which need to be dealt with aggressively, to make sure that the numbers, safety statistics, stay as good as they are.

Mr. PASZTOR: Well, the situation is complicated, but it's sort of along those lines. The easy issues have been dealt with. The mechanical problems, the obvious problems in the whole system of aviation in the U.S. and much of the world - the developed world, have already been dealt with. And so therefore, the fatality rate and the accident rate is much lower than it had been before those problems were basically resolved.

But it's a very complex system, and so, there are all these moving parts, and these incipient potential problems are now being looked at, to determine which of them could result in serious accidents. And the problem is that they're very hard to get at. They're very expensive to fix. And the airlines have been resisting them, and the FAA has not been very aggressive in pushing for more changes in many cases, because the fallback position is, look how great the statistics are. And that is true.

PESCA: Well, you talked about how the - their criticism is that the FAA might not be on the ball as much as they need to be. And the U.S. Department of Transportation's inspector general, I think, yesterday, recommended that regulators establish an independent watchdog within the FAA to investigate inspectors' safety concerns. Why is there this tension between the Department of Transportation and the FAA?

Mr. PASZTOR: There's been this tension between the inspector general and the FAA for some time. Part of it is institutional. Part of it is the bureaucratic inertia that any big bureaucracy has. The FAA is often slow to change and slow to move, and they've been resisting calls for such an independent safety - basically watchdog inside the agency, by saying, look, we have methods in place. We have systems in place. Everything from lines - phone lines that FAA officials can call to complain about, you know, superiors blocking investigations.

There are all sorts of anonymous-reporting systems that airlines have, that the FAA has, where pilots, mechanics, controllers can report what they believe to be safety hazards. And they have some of those systems in place, but this has been a continuing issue of how much more they need to do. And it's really the typical inside-the-belt way, I'm doing as much as I can, don't criticize me, because you're just trying to gain some points for whatever.

PESCA: Right. And without the tragedy of a big, fatal crash, the bureaucracies tend to remain entrenched. I mean, you know, right after the - in November of 2001, a man - a month after September 11th, that American Airlines flight headed for the Dominican Republic crashed in Queens. There was a lot of impetus to start looking at, you know, fuel tanks and - but then as time goes on, the impetus subsides and maybe the fuel tanks don't get looked at.

Mr. PASZTOR: Well, I think that's right. And maintenance is a good way to consider that, because in March and April, we had really an uproar in the U.S. with hundreds of thousands of passengers delayed. Flights cancelled. Southwest and American Airlines, among others, were shown to have not done the proper maintenance. And just last week, the FAA finished its review of the maintenance practices across the industry, and gave itself good marks. Said the airlines really have done a good job, and they've done a very good job of overseeing it.

But the hard work remains to be done, and that is, how is it that those lax maintenance practices were permitted to occur just a few months ago? And what is it about the system that should be changed to make sure that those kind of mistakes, oversights, or sometimes a form of corruption, in terms of too-cozy relationships between the FAA and airlines, don't reappear?

PESCA: Should we look at...

PESCA: Quickly, should we look at the fact that, this year, the FAA filed a 10-million-dollar penalty against Southwest for bad maintenance, and American Airlines was forced to cancel flights, because of bad maintenance? Is that a sign that the - there's something wrong with the industry? Or a sign that there's something right with the overseers of the industry, that they can impose this penalty and get things changed?

Mr. PASZTOR: Well, Mike, that depends on who you talk to, and that is the nub of the issue. If you talk to the FAA, they say, look, we're getting tough. We're determined to crack down on problems. If you talk to critics of the FAA, both inside and outside government, and certainly on Capitol Hill, they would say that these are reactions to problems that should have been caught earlier. I...

Mr. PASZTOR: From my perspective, it's somewhere in between. The system works. It's not fundamentally flawed, but there are enough problems to warrant some concern, and they should be dealt with aggressively and as quickly as we can.

PESCA: Thank you very much, Wall Street Journal's Andy Pasztor. This is the Bryant Park Project on NPR News.