Accessibility links
Four-Day Workweek Gaining Ground In U.S. Casual Fridays take on a whole new meaning in Utah starting next month. Utah state employees will not go in on Fridays. It's a move meant to save on commuting and energy costs. 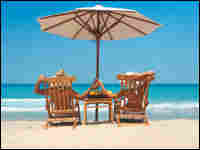 Beginning next month, most Utah government employees will not go in on Fridays. Many cities and counties already have four-day workweeks, and some states have voluntary programs for shorter workweeks, but Utah is the first state to institute the four-day week as a policy.

Brigham Young professor Rex Facer, who has studied changes in workplace schedules, says workers often like the change, but employee satisfaction is not the main reason government employers are taking new looks at alternative work schedules. Facer says employers are looking for ways to reduce commuting costs, congestion and pollution.

Facer started studying alternative workweeks in 2004 when his own hometown, Spanish Fork City, implemented a four-day workweek. He found that many employees really liked it, mostly because they felt that it helped to ease conflicts between work and family.

But Facer says the four-day workweek didn't appeal to everyone. One-third of people surveyed said they preferred it, one-third said they didn't really care one way or the other, and the final third said they actually preferred going in on Fridays. As a result of the mixed sentiment, Facer says, his hometown has gone back to more traditional work schedules in some cases.

But it isn't as though no one will work Fridays. The government won't shut down totally on Fridays; essential services will still be provided. Still, Facer notes, "Most cities, when they've looked at it, have found that Friday is a very low usage day for city services."