Accessibility links
Close To You: Burt Bacharach In Concert The legendary songwriter produced some of pop music's lushest and most iconic hits in the 1960s and '70s. With a crew of vocalists, he takes the piano bench to perform some of his most popular work, live at Walt Disney Concert Hall.

Close To You: Burt Bacharach In Concert

Close To You: Burt Bacharach In Concert

What the World Needs Now is Love

Medley: Don't Make Me Over / Walk on By / This Guy's in Love with You / I Say a Little Prayer, Trains and Boats and Planes / Wishin' and Hopin' / Always Something There to Remind Me

Medley: One Less Bell to Answer / I'll Never Fall in Love Again / Only Love / Do You Know the Way to San Jose?

Movie Medley: The Look of Love / Arthur's Theme / What's New Pussycat? / Raindrops Keep Falling on My Head / The Man Who Shot Liberty Valance / I Remember Love / Hey Little Girl / Alfie / A House is Not a Home

That's What Friends Are For 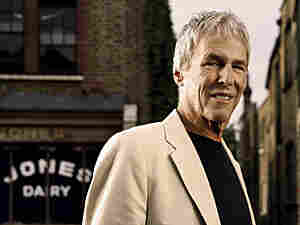 Burt Bacharach's appearances in all three Austin Powers movies kept him in the public spotlight of a new generation. Courtesy of the Artist hide caption

Burt Bacharach says he prefers to compose his pop tunes in a comfortable chair -– or even on an airplane.

"The best way, for me, always is to get away from the piano, sit in a place and hear it in my head," he says. "And that's where everything gets born."

Bacharach's lush pop songs from the 1960s and '70s, with their complex harmonies and rhythms, were very different from the three-chord rock 'n' roll tunes that were popular at the time.

"I guess it all is connected to having been a well-founded musician, having studied classical music, having studied composition with Darius Milhaud and Henry Cowell and Bohuslav Martinu –- having a good base, you know?" he says.

In spite of, or maybe because of their complexity, many of Burt Bacharach's songs topped the charts in their day. He's remained a pop icon, thanks in part to a certain series of blockbuster, Hollywood comedies.

"You cannot have much more fun than being on a set, filming a scene from Austin Powers with Mike Myers," he says on stage. "I can't tell you what it's meant for my career, being in those pictures, with all the 11-year-olds in this country who got to know my music that way."

Along with vocalists Josie James, John Pagano and Donna Taylor, Bacharach sat down at the keyboard to perform some of his greatest hits, live at Walt Disney Concert Hall.