Accessibility links
Trailer Graveyards Haunt FEMA, Neighbors What should be done with the nearly 100,000 travel trailers sitting idly at sites around the country, at a cost of $130 million a year to the government? Concerns over formaldehyde fumes have rendered them useless, and most could end up sold as scrap.

FEMA trailers stretch as far as the eye can see in the Marion County, Miss., staging area. Watch the raw footage of the mile-and-a-half site. 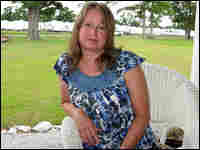 Wanda Phillips at her home in Purvis, Miss. Her house is surrounded by thousands of empty FEMA travel trailers. Amy Walters/NPR hide caption 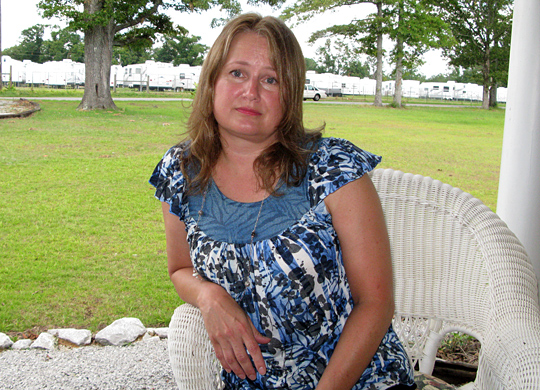 Wanda Phillips at her home in Purvis, Miss. Her house is surrounded by thousands of empty FEMA travel trailers. 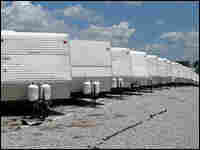 FEMA travel trailer staging areas like this one in Purvis, Miss,. have caused concerns for neighbors — like Phillips — who worry about formaldehyde fumes and are suing the federal government. Pam Fessler/NPR hide caption 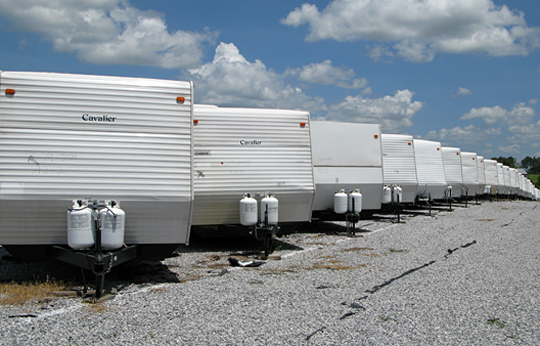 FEMA travel trailer staging areas like this one in Purvis, Miss,. have caused concerns for neighbors — like Phillips — who worry about formaldehyde fumes and are suing the federal government. 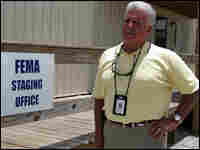 Mike Miller, FEMA's field coordinator in Mississippi, says that although some relate travel trailers to concerns over formaldehyde, he sees the units as "a cool, dry, clean place for a family to live until they can get established." Pam Fessler/NPR hide caption 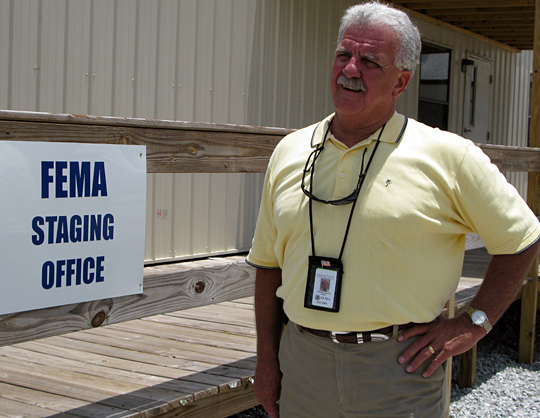 Mike Miller, FEMA's field coordinator in Mississippi, says that although some relate travel trailers to concerns over formaldehyde, he sees the units as "a cool, dry, clean place for a family to live until they can get established."

After high formaldehyde levels were found in travel trailers used to house the victims of Hurricane Katrina, the federal government said it would use them again only if it had no other choice.

Which raises the question — what should be done with the almost 100,000 trailers now sitting idly at sites around the country, at a cost to the government of $130 million a year?

It looks as though most could end up being sold for scrap.

Wanda Phillips of Purvis, Miss., wants the trailers gone. Her property is across the road from one of several staging areas that FEMA set up right after Hurricane Katrina almost three years ago. Thousands of empty trailers are still stored there, row after row, baking in the sun.

"There's trailers, I would say, within 150 feet of my house," says Phillips.

Phillips says the site used to be an open field with a lake and longhorn steer. Now, she says, there's just a herd of white elephants.

And they've caused her plenty of trouble. She says the first problem was traffic — hundreds of large trucks each day delivering and picking up trailers for hurricane victims.

"You couldn't get in and out. They parked in the front yard, parked on our grass, parked on the root system of our trees," says Phillips.

But that was nothing, she says, compared with what followed — insomnia, headaches, coughs and sinus problems. At first, she thought it was all the dust in the air. So she decided to move temporarily to a plot of land she owns elsewhere in the state.

But Phillips made a mistake. She bought a used FEMA trailer to live in.

So Phillips decided that if she was going to be sick anyway, she might as well move back home.

And then she recalls sitting on the living room floor one day when her husband tossed her the newspaper and said "Look at this."

"I reached and picked it up off the carpet and I looked at it, and I said, 'Oh my God,' " she remembers. "I said, 'There's formaldehyde in those trailers. What is formaldehyde?' "

And that was just the start.

Since then, Phillips has spent months collecting documents and government reports and making her own stink in an effort to get rid of the trailers. She has joined thousands of Gulf Coast residents who have complained about formaldehyde fumes and are suing the federal government.

The agency says the ongoing litigation has stalled its efforts to dispose of the more than 94,000 travel trailers it now has sitting — empty and unused — around the country.

Almost a third are in Mississippi.

For Mike Miller, FEMA's field coordinator in Mississippi, the trailers offered a solution to a problem.

"When some folks look at these trailers, they see formaldehyde. When I look at them, I see a cool, dry, clean place for a family to live until they can get established," he says.

Miller drives along a dirt road that cuts through the staging area right across from Phillips' yard. Most of the trailers stored here look as though they're in fairly good shape, although there are several burned-out units, the remnants of household — and meth lab — accidents.

Miller says the trailers served their purpose in the hectic days after Hurricane Katrina, housing more than 120,000 families. But now, he says, he'd be as happy as anyone — if not more so — to see them gone.

"Our job out here in the field is to work ourselves out of a job. But, right now, that's not taking place, so we're in caretaker status and making sure we have good security and a good program to maintain the grounds and the units here," he says.

FEMA had been selling the trailers but stopped last year because of the concerns about formaldehyde.

Miller says he's heard a lot of jokes since about what to do with the trailers, such as using them to build a border fence with Mexico. But he thinks taxpayers — who spent about $3 billion to buy trailers and mobile homes after Hurricane Katrina — would be better served if the sales resumed.

He says those who want to buy the trailers aren't worried about formaldehyde, because most of them want them for part-time recreational use.

"We got folks, hundreds of folks that are calling us wanting us to buy these units. And over the months, probably thousands of folks," he says. "We had one gentleman come in. He wanted to buy 10,000."

Miller's not sure why, but he suspects it was to house oil field or construction workers.

But what might make sense on the front lines doesn't always make sense at headquarters.

"What we don't want to do is provide travel trailers that have high formaldehyde values and sell that to somebody who may end up living in that unit. We've decided that we're not going to take that chance," says David Garrett, FEMA's deputy assistant administrator for disaster assistance. "We think the safest thing to do is to dispose of these things in a way that may not be a danger to anybody in the future."

And that means selling them for scrap. Garrett says some units might still be sold to individuals, but only after they've been tested to see if they're safe.

Meanwhile, the Centers for Disease Control and Prevention is also looking at whether air filters or something else can be used to make the trailers safe.

Besides the thousands of units still occupied or sold to individuals, over 7,000 trailers were donated as government surplus to states and nonprofits to be used as police mobile command centers or other temporary facilities.

One of those surplus trailers has ended up in a small lot on the campus of MIT in Cambridge, Mass.

Lecturer Jae Rhim Lee plans to use this trailer for a course she's teaching this fall. And for a campuswide competition called the MIT FEMA Trailer Challenge.

"People will develop solutions to what do you do with these thousands of surplus trailers," she says.

Lee is reluctant to prejudge the outcome of the competition. She doesn't want to stifle anyone's creativity. But, she says, the trailers could be used as mobile health centers or environmental testing labs — something to help people such as Wanda Phillips and others who think they got the raw end of the trailer deal.

Lee says she plans to present the winning ideas to FEMA, hopefully before all the other trailers have been sold for scrap.