Accessibility links
Prices And Demand Skyrocket, Not Fireworks A series of supply and production problems in China have caused cities across the U.S. to curtail or completely cut their fireworks shows this Fourth of July. The problems have even affected commercial sales, driving prices sky-high. 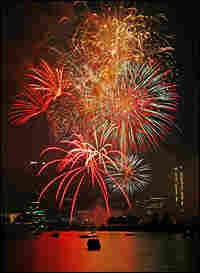 Fireworks shows in the U.S. are being canceled or scaled back as supply problems in China cause a fireworks shortage. Darren Hauck/Getty Images hide caption 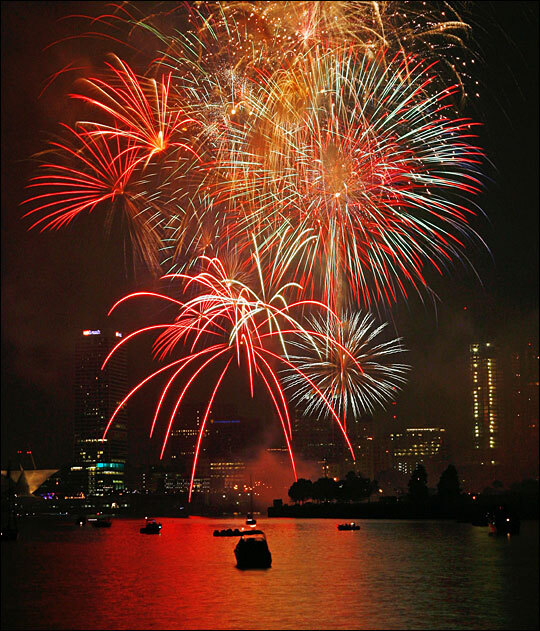 Fireworks shows in the U.S. are being canceled or scaled back as supply problems in China cause a fireworks shortage.

Skyrocketing food and gas prices are not the only things blowing holes in Americans' pockets going into this holiday weekend — so are fireworks. Fireworks are scarce, and prices are way up owing to a major supply disruption, making for some unusually dark skies this year.

Teenagers stumped across a big gravel parking lot after a concert near Kansas City, Kan., a little deflated. Something was missing from the 13th annual "Red, White and Boom" show — the boom.

"I wanted to see a bunch of sparks in the sky," says Klint Van Winkle. "But nothing."

Event organizer Jamie Harris says several fireworks companies, including the one they have always used, let her down this year.

"They just kind of pulled the fuse out of our display, basically," Harris says. "I didn't even get a straight answer on why we were being turned away. And then I found out later there's been a shortage."

Almost all fireworks shot in the U.S. come from China. Charlie Wald, who runs the fireworks company his grandfather started 80 years ago, says it's been quite a year at Wald Fireworks: "It was like whatever could go wrong in China went wrong this year."

In February, an enormous explosion and fire took out 20 big fireworks warehouses and a major port. Chinese officials soon closed other ports to the volatile cargo and finally stopped fireworks exports all together this week. They will resume sometime after the Olympics.

Labor, materials and shipping are all way up, the dollar is down, and Wald says orders are backed up. Whatever is available costs about 25 percent more this year

"It's the worst I've seen, as long as anybody can remember," Wald says. "My generation, my father's generation — never seen anything like it before.

Still, big pyrotechnic displays like the one near Kansas City will go on as planned, but with fireworks bought months ago. Hundreds of small-town celebrations, however, are off.

Matt Sutcliffe, who runs Premiere Pyrotechnics, says he's had to turn away more than 700 potential customers.

"The ones that hurt the most were the calls of congratulations, or sometimes you'd get a letter that said 'congratulations, you've been awarded the contract for this display,' " Sutcliffe says. "And we'd have to tell those folks we were going to put them on a waiting list, but it doesn't look good."

While things are rough in the display business, the picture's only a little brighter in the retail stand.

Mike Collar, the president of the American Pyrotechnics Association and an independent fireworks business owner says that prices for backyard-type fireworks are also up more than 25 percent this year.

Still, at stands across the country, customers like Kelly Easley are buying — if a little reluctantly.

"When I looked at the prices, I was kind of shocked to see consumer fireworks are way out of line this year, I think," Easley says. "And with the economy the way it is, we're just going to be shooting less, it looks like."

If the shortages continue — and people in the industry expect they will — Easley and everybody else who buys fireworks or sponsors shows will be getting even less bang for their buck next year.