Accessibility links
'Toons Learn Physics, The Better To Break Its Rules You've heard of Physics for Poets? This summer, San Jose State University is offering a new master class in physics for cartoonists. It's teaching animators how the real world works — even for characters who don't live in it.

Listen
'Toons Learn Physics, The Better To Break Its Rules 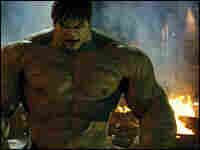 Bulked up: When Bruce Banner becomes the Incredible Hulk, where does all that extra mass come from? Professor Alejandro Garcia explains in the video below. Universal Pictures hide caption 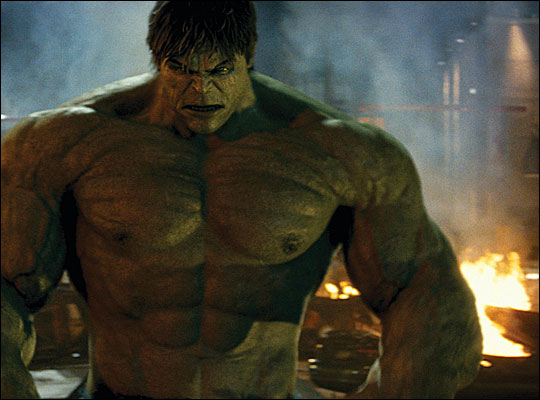 Bulked up: When Bruce Banner becomes the Incredible Hulk, where does all that extra mass come from? Professor Alejandro Garcia explains in the video below. 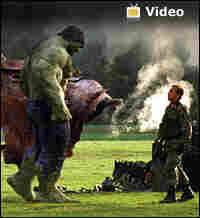 If the Hulk kicks this guy, which way will he fly? Watch and see. 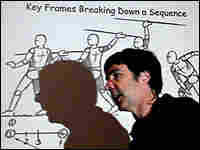 What is it that makes Looney Tunes so loony?

Well, for one thing: when Road Runner lures Wile E. Coyote at seemingly supersonic speed off the edge of a cliff. The coyote freezes in mid-air, looks down and realizes there's no cliff under him anymore.

Then, usually with a pained expression, he rockets straight down into the ground.

Of course if a real coyote — one subject to the laws of gravity — were inattentive enough to go speeding off a cliff, it would fall immediately. And its downward path would follow a continuous arc, as vector laws and the physics of velocity insist.

Which is saying something because, thanks to a $200,000 grant from the National Science Foundation, Garcia is spending his summer teaching a master class, The Physics of Animation, for cartooning students at San Jose State University.

In the first class of its kind, he's showing animators how the rules of physics apply to their world.

In The Incredible Hulk, for instance, when the Hulk's massive body leaps off the ground at high speed, the concrete breaks and the ground trembles. That's Newton's third law — the one that says every action has an equal and opposite reaction.

Which leads to a kind of animated dilemma.

"If the giants have this slower motion, are you able to outrun a giant?" Garcia asks.

But physics offers an answer, too.

"The answer is no," Garcia tells his class. "Because if the giant is 25 times your height, then each step ... takes five times longer. [The movement] is slower indeed in terms of the amount of time per step, but those steps are real long," he explains.

But come on, these are cartoons! Turtles talk. Chipmunks sing. Superheroes survive lightning strikes. Why should a talking, flying pig obey the laws of physics?

"You have to know what the rules are in order to break them, to advance the story successfully and [to] keep the audience believing what they're seeing on screen," says illustrator Courtney Granner, who co-directs the animation program at San Jose State.

If a tiny bird punches an enormous reptilian monster and the monster is knocked off his feet, Granner points out, it means that's one strong superbird.

So if, in the story, he's just any old bird, the animator should stick to the laws of physics — and the monster wouldn't budge.

"Our feet are grounded on the planet because of gravity," Granner says. "This is our reality."

Garcia agrees that cartoons must have an anchor in reality. That's why cartoonists should learn physics. But in the end, he says, what works is whatever makes the story better.

"We never have told these students that an animation's wrong, that this should be moving in this fashion," Garcia says.

And when a cartoonist makes a deliberate, thoughtful choice to turn the rules of physics on and off to make the perfect story?