Accessibility links
Reckless Kelly: Songs For Staying Put In this year of high gas prices, reviewer Meredith Ochs is already sick of the word "staycation." But she's found an Austin, Texas, band with a great new song — which doubles as a handy rationalization for spending a holiday at home. 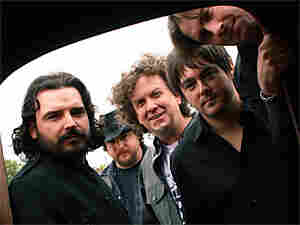 I will always remember 2008 as the year of the "staycation." I hate the way that word sounds as much as I hate what it means. It's just an excuse for canceling your summer travel plans in the face of sky-high fuel prices, unspeakable airline indignities, and general economic woes. Making things even worse are the relentless commercials for state tourism boards, with their chipper theme songs and celebrity shills.

That's why I'm especially grateful for Austin, Texas, band Reckless Kelly. Their new album, Bulletproof, has a song that might make you reconsider your next trip. It's called "How Was California?" and it's a much better rationalization for not going away than the dreaded staycation.

The song skips across the United States to illustrate the point that traveling can be a drag. It has the kind of jaded feeling that only someone who has spent a lot of time driving around the country could express.

But the song is more than just a note from a weary road dog who's seen it all. It's more than just a bummed-out anthem for a summer of staying close to home. Singer Willy Braun is hinting at our national malaise. According to him, every city has the blues, even his own hometown of Austin, a place known for fun.

As any itinerant knows, it doesn't matter how far you travel –- you will always bring yourself with you. And that's another message in this Reckless Kelly song. People who go on vacation to escape their lives may get to do a new thing or two, but there's no way to leave your troubles behind. All that said, I guess I've resigned myself to spending this summer at home.

Good thing I live in one of the most exciting cities in the world. Oh, wait a second. Reckless Kelly says New York is a bummer, too.