Accessibility links
In A Crumbling House, A Trove Of Everyday History For years, historian Adam Goodheart had been taking students to an old Maryland plantation. Little did he know there was a trove of family records — an intimate portrait of an influential family — stashed upstairs.

Listen
In A Crumbling House, A Trove Of Everyday History 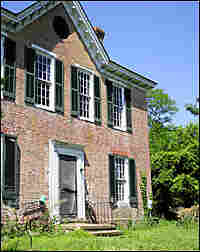 Poplar Grove: The Maryland plantation has been occupied by one family since the 1700s. Andrea Rane/NPR hide caption 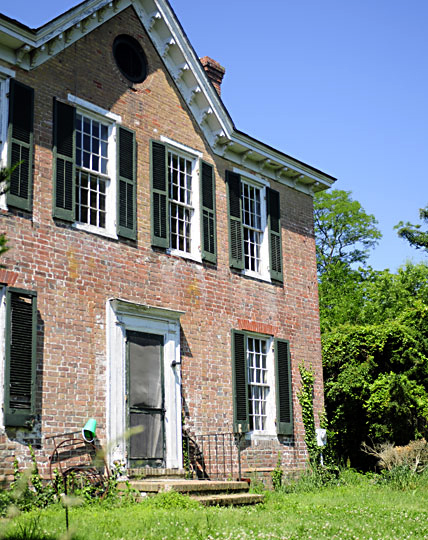 Poplar Grove: The Maryland plantation has been occupied by one family since the 1700s. 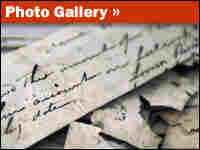 Adam Goodheart (left) and Jeremy Rothwell sort papers at Poplar Grove on a June visit to the house. hide caption 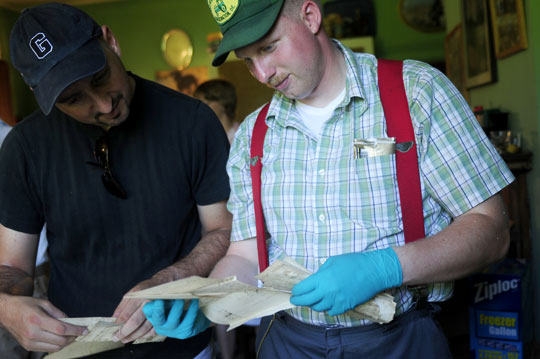 Adam Goodheart (left) and Jeremy Rothwell sort papers at Poplar Grove on a June visit to the house.

Among the treasures Adam Goodheart and his students uncovered at Poplar Grove was a charmingly racy poem, found among the papers of Gen. Thomas Emory (1782-1842). An excerpt:

Adam Goodheart gets excited about almost every scrap of paper he finds at Poplar Grove.

"This is right where it was when we found it," Goodheart says, indicating a yellowing pamphlet. "Directions for using the revolving steam washer, dated Easton, Md., June 7, 1832."

For about five years now, Goodheart — he's an American-history professor at Washington College — has been taking his students to the old mansion as a way of making history come alive.

Recently, they discovered thousands of documents, from the banal to the extraordinary, dating as far back as the 17th century. They were squirreled away in boxes and crates in an upstairs room at Poplar Grove, which sits on 250-odd acres near the Maryland town of Centreville.

They're the private papers — diaries, letters, political handbills, checkbook ledgers and much more — of one prominent Maryland family. And they document some of the most important chapters of American history.

"My students just got really excited and started opening up some of these boxes and looking at papers," Goodheart says, remembering the day those boxes came to light. "And I was saying, 'Now these are the family's private papers, you might not want to be going through all this stuff.

"But they got so excited that we all started looking through it and realized there was really a treasure-trove we hadn't imagined."

'A Place In Need Of A Plan'

Poplar Grove has been occupied more or less continuously by the same family since the mid-1700s. It's a living piece of history.

But it's not an untouched piece of history: These days, the house is occasionally rented out to hunters, who use it as a lodge. Their big camouflage overalls hang in the living room, and a very modern girlie poster adorns a kitchen wall.

From the outside, the large house looks to be in surprisingly good shape, given its age. Inside, it's a mess: The paint is peeling, vines are growing through cracks in the windows, and some of the stairs feel a little iffy underfoot.

"This whole place is, as I describe it, a place in need of a plan," says James Wood, the property's current owner.

Wood is a descendant of the original owners, the Emory family. The first known resident, Capt. John Register Emory, was an officer in the Revolutionary War. Another Emory was a general in the War of 1812.

Wood says he's tried to keep the place in good shape, but the upkeep is tremendous.

"First thing I said to my son when he got it was 'Sell it,'" says Mary Wood, his mother. Then she laughs: "That's not a patriotic thing to go out over the radio."

'A Family That Saved Everything'

Mary Wood was married to an Emory descendant who died in April. She appreciates the history of Poplar Grove — she herself wrote a book about the women in the family. But to get the rambling house back in running order, she says, would be an enormous undertaking.

As for the papers, this is a family that saved everything.

"I cannot understand why they didn't throw stuff out," Mary Wood says. "I mean, little receipts for 25 cents at a store, or something. Anyway, these are all treasures now. Letters, diaries, dear Lord knows what, we'll soon find out."

(Indeed: The Emory papers from Poplar Grove are now being studied at the Maryland State Archives. Goodheart started a blog about the project, where you can see photos of the house and read transcripts of some of the original documents.)

Among recent findings: firsthand accounts of slavery. In the papers of Gen. Thomas Emory, there's a letter about Emory slaves who escaped through the Underground Railroad in the 1830s.

There's also an anti-slavery petition sent to the Maryland Legislature, signed by dozens of citizens of Queen Anne's County.

"And of course these were people who themselves were slave owners, including a number of Emorys," Goodheart says, pointing to one signature. "There's W.H. Emory, who we believe was William Emory — the son of General Thomas, who was a member of the Legislature.

"So this is a son petitioning his father" — on a subject that tore more than one American family apart.

Goodheart feels like he knows the Emorys after reading their personal letters and learning about the details of their lives. He and the other historians working on the project even make regular visits to the family cemetery next to the house.

"Greetings Emorys," Goodheart says, among the gravestones one recent afternoon. "Thank you, as always, for letting us come here to this place that was so important to so many generations of you."

Back at the house, Mary Wood says she doesn't think any of the Emory ancestors will mind that their private family papers are leaving Poplar Grove for the first time in more than 300 years.

Except for one ancestor in particular, that is.

"I'll tell you who would object that I know of is Lloyd, the one who left the place to James," she says.

"Because he was true hermit. So he is turning over in his grave."