Accessibility links
It's Man Vs. Machine In 'Digital Apollo' David Mindell, a professor of history and engineering, talks about the politics, the pilots and the technology involved in space travel.

Listen
It's Man Vs. Machine In 'Digital Apollo'

It's Man Vs. Machine In 'Digital Apollo'

What are your questions on humans and machines in space? 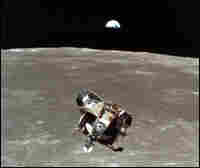 Remember this scene from 2001: A Space Odyssey, in which astronaut Dave Bowman battles with the spacecraft's onboard computer, HAL-9000?

HAL: 'I think you know what the problem is just as well as I do.'

Dave: 'What are you talking about, HAL?'

HAL: 'This mission is too important for me to allow you to jeopardize it.'

Dave: 'I don't know what you're talking about, HAL.'

HAL: 'I know you and Frank were planning to disconnect me, and I'm afraid that's something I cannot allow to happen.'

Now, a very different story on the tug-of-war between man and machine has emerged. It's called Digital Apollo, Human and Machine in Spaceflight. Author David Mindell talks about how decisions are made between astronauts, engineers and computers.