Accessibility links
Turkey's AKP Party Defends Itself In Court Turkey's ruling Justice and Development Party faces charges of imposing Islamic law in a secular state. If convicted, the party could be dissolved and Turkey's prime minister and president could be banned from politics for up to five years. 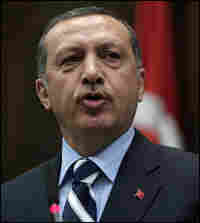 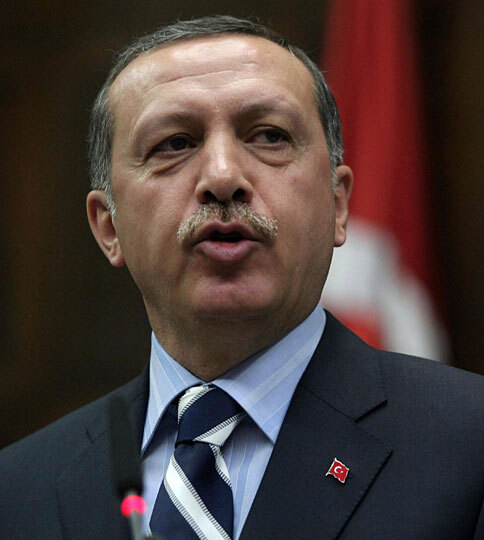 The ruling political party in Turkey fought for its survival in court Thursday.

The elected Justice and Development Party (AKP) government and its leader, Prime Minister Recep Tayyip Erdogan, are being accused of attempting to impose Sharia (Islamic religious) law in Turkey.

Government representatives defended themselves against charges they are trying to subvert the strict secular political system in a country where the population is 99 percent Muslim.

If proven guilty, the AKP could be dissolved. Erdogan and Turkey's president, Abdullah Gul, could be banned from politics for up to five years, and the party's brand new headquarters could be confiscated by the state.

"We basically don't know what's going to happen if the party that rules the country gets closed down," Carkoglu says.

The Heart Of The Case: Head Scarves

The court case is widely seen as part of a power struggle between an elected government whose leaders are rooted in political Islam and a secular opposition that's backed by the judiciary and by Turkey's powerful military.

Suat Kiniklioglu, an AKP member of parliament, claims the court case is a politically motivated attack launched by what he calls militant secularists.

"There are a lot of people in Turkey who are willing to take steps that don't fit in a normal democracy," Kiniklioglu says. "And unfortunately, the case against our party suggests that what cannot be done at the ballot box is trying to be done through a judicial court case."

As evidence of the government's alleged Islamist agenda, the chief prosecutor has pointed to a constitutional amendment passed by Erdogan to lift the ban on women wearing Islamic head scarves in universities.

"The fact is there are women in this country who wear head scarves," Kiniklioglu says. "And there are many of them who want to study at universities. We feel that to take away the right to higher education to women who are devout and choose to wear the head scarf is not fair. It's not democratic."

But the head scarf is a hugely divisive political symbol for secular Turks, who fear that reintroducing the head scarves could push the majority Muslim country toward becoming an Islamic republic like its neighbor, Iran.

Last month, the judges on the constitutional court voted to once again make the headscarf illegal in universities. That's an ominous sign for the AKP government, because the same panel of judges is expected to rule on whether or not to ban the party.

The mood in Turkey is already tense and increasingly polarized between the secularist elite and the Islamist-rooted conservative government circles, says political scientist Carkoglu.

The power struggle escalated on Thursday, when police launched a series of pre-dawn raids. They arrested 21 leading figures from the secularist opposition, including journalists, businessmen and several high-ranking retired Army generals who have long been considered part of an untouchable elite.

Sensationalist television channels showed images of Sinan Aygun, head of the Ankara Chamber of Commerce, being paraded by police past cameras, yelling, "My only crime was to love the republic."

Carkoglu says most Turks will interpret the latest police raid as a revenge attack by the embattled government of Erdogan.

"The military establishment's retired officers have been targeted," he says. "But that's obviously a signal to the whole establishment that the government intends to fight back."

On Thursday, pro-government newspapers published reports accusing the 21 arrested suspects of being part of a shadowy ultra-nationalist plot to overthrow the government. The police have not yet pressed formal charges against the suspects.

But Kiniklioglu repeated the claims about an alleged coup plot.

"It's quite worrying to see that ... a number of people, ex-generals, columnists, what not, are willing to take extremely radical steps to overthrow a government, to organize disorder that would warrant a military intervention into politics," he says.

Turkey has a long history of coup d'etats. The military has overthrown four civilian governments in the last 50 years.

On Wednesday, Gen. Ilker Basbug, Turkey's second highest ranking military commander, said Turkey is going through tough times. He urged people to avoid believing in conspiracy theories, and then he made a public appeal for calm in the country.