Accessibility links
Teddy Thompson, Embracing Modern Music The son of folk-rockers Richard and Linda Thompson says he didn't listen to any music made after 1959 until he was 16. But his new album furthers his folk and country roots with some of the contemporary sounds he's grown to like.

'Where To Go From Here'

WEB EXCLUSIVE: 'Don't Know What I Was Thinking' 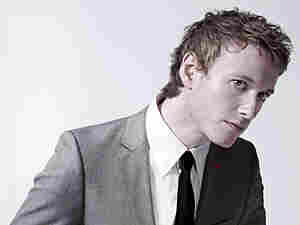 Teddy Thompson's album A Piece of What You Need is his fourth solo record. Kurt Iswarienko hide caption

He has done classic country on his album Up Front & Down Low. Recording with his parents, songwriters Richard Thompson and Linda Thompson, he's also paid homage to his folk-rock roots.

In fact, he has said he didn't listen to any music made after 1959 until he was 16. As a kid, he listened to early rock 'n' roll and country music exclusively.

"And then I started becoming aware of modern music," Thompson says. "And kids your age at school start getting interested in music. And what I heard that was contemporary music just sounded so much worse than the '50s music. And it was, for the most part. So to the ears of a child who didn't know any better, I equated '50s music good, modern music bad."

But Thompson eventually found some contemporary music he liked. Now his new album, A Piece of What You Need, takes his folk music a little further, mixing it with modern pop production. He spoke with Linda Wertheimer about the album and brought out his guitar to play a few songs.

"It depends where you're from, because music does come around," he says. "So people of my parents' generation would certainly hear this record and probably hear the rockabilly, or country, or rock 'n' roll influences and think, 'Oh, that sort of reminds me a bit of my youth.' But people of my age and younger who hear it don't have those reference points so much, so to them it sounds positively modern. But that's the way music goes."