Accessibility links
Lucknow Is For Lovers : Krulwich Wonders... Young Indians have their own reasons to celebrate a 19th century shrine to national independence.

Lucknow Is For Lovers

Lucknow Is For Lovers 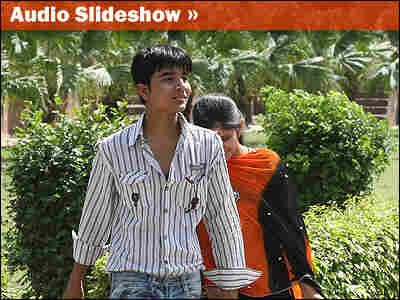 Watch 'Lucknow Is For Lovers'

In the heart of the northern Indian city of Lucknow looms a national shrine where the infamous 1857 Indian Mutiny took place. Pockmarked buildings memorialize a fierce battle that sparked an attempt at Indian independence around the country. Although the rebellion ultimately failed, today this site is often visited by young Indians, who wander back to the peaceful cemetery to celebrate an independence of a different kind.

Our intern, Aaron Scott, intrigued with the battle at Lucknow, wrote an account of it here:

The British army's introduction in 1857 of rifle cartridges believed to be greased with a mixture of beef and pork fat -- defiling substances to Hindus and Muslims -- sparked thousands of discontented Indian soldiers to rise up against British rule. Known in India as the Indian Rebellion of 1857 and as the First War of Independence and in Britain as the Indian Mutiny, the string of battles and massacres set northern India ablaze for over a year.

At the heart of the rebellion was the Siege of Lucknow.

One of the most splendid cities in India at the time, Lucknow was the capital of the state of Oudh (now known as Awadh, near the Nepal border). After the first Indian soldiers revolted and stormed Delhi in May, Indian rebels surrounded the Residency, a grand fortress in Lucknow, trapping inside thousands of British citizens and Indians loyal to the crown.

Two initial British attempts failed to rescue Lucknow, only emboldening more Indian soldiers and landowners to revolt until 30,000 rebels, by some estimates, bombarded the Residency with artillery fire.

Finally, after a six-month siege, a British force reached Lucknow, fiercely battled through the narrow streets and evacuated the remaining women, children and wounded soldiers.

The rebellion didn't come to an official end until July 1858. The British Crown consequently took control of India from the East India Company and reorganized the government to address many of the tensions that led to the rebellion, which included granting greater religious tolerance and integrating Indian members of the higher castes into local governments.

Although the rebellion failed and the Siege of Lucknow was broken, the changes they brought about planted the seeds for the national movements that ultimately led to Indian independence in 1947.