Accessibility links
Model T: 'Universal Car' Sparked Gasoline Demand This year is the 100th anniversary of perhaps the most famous car ever made. The Model T put America on wheels and helped forge a manufacturing revolution. But the current energy mess can be traced back to that car's gasoline engine. 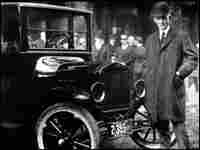 Henry Ford stands next to a Model T, one of 15 million made. Getty Images hide caption 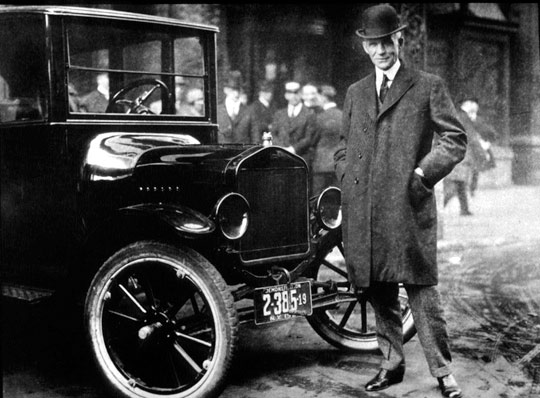 Henry Ford stands next to a Model T, one of 15 million made.

The Model T became so popular, people wrote songs about it. Here's one recorded circa 1915 by Billy Murray and written by C.R. Foster and Byron Gay. From the Collections of The Henry Ford museum. 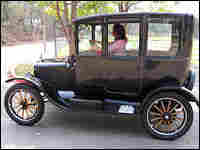 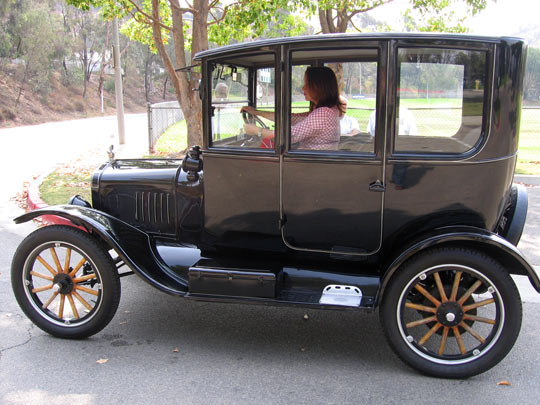 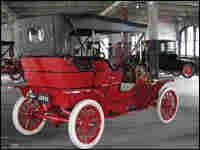 A collection of cars is on display at Detroit's Model T Automotive Heritage Complex inside the former Piquette Avenue plant. Front and center: one of the earliest versions of Ford's Model T, painted in Carmine Red. Model T's later were painted in black because black paint dried faster Dustin Dwyer for NPR hide caption 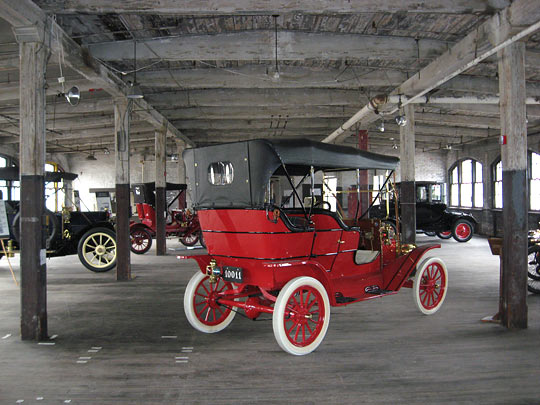 A collection of cars is on display at Detroit's Model T Automotive Heritage Complex inside the former Piquette Avenue plant. Front and center: one of the earliest versions of Ford's Model T, painted in Carmine Red. Model T's later were painted in black because black paint dried faster

This year is the 100th anniversary of perhaps the most famous car ever made. The first Ford Model T — also known as the Tin Lizzie — rolled out of Detroit in 1908. It put America on wheels and helped forge a manufacturing revolution.

At Ford's Piquette Avenue Plant, in a room about 12 feet by 15 feet in size, Henry Ford and a handful of engineers worked to build what Ford called a "universal car."

They decided it would run on gasoline. Both steam power and electricity were options at the time, but gas-powered cars were easier to refuel and quicker to start.

Dozens of companies in the U.S. were already churning out automobiles, but they were mostly toys for the rich. Ford wanted his Model T to be simple, rugged and affordable — a car for the masses.

"It was a great car," says historian Douglas Brinkley, who wrote a book about Ford Motor Co. called Wheels for the World.

Simple Enough For The Masses

Within two years, Ford had sold more than 10,000 Model Ts — all built by hand, and available in color. The pressure to make more cars soon pushed Ford to build a massive new manufacturing complex.

In 1913, Ford plant manager William C. Klann put in place the world's first automotive assembly line. He got the idea from visiting a slaughterhouse in Chicago.

Any Color As Long As It's Black

Now Ford could crank out more cars, more quickly. He got rid of the colored paint, because black paint dried faster. With all of the new efficiencies, Ford could drop the price of the Model T.

Sales soared. The Model T was no longer just a car. It was a revolution.

"It was a wonderful invention, the Model T and the mass-mobility automobile," says Dan Neil, the automotive critic for the Los Angeles Times. "But now, we're starting to see that there were consequences."

He says the debate over global warming, and dependence on oil-rich nations, all come back to the Model T's internal combustion engine, powered by gasoline. And over time, these engines have only gotten bigger and thirstier.

A New Shift In Cars

"Americans have grown up in an environment where cars were big, big, big," Neil says. "I think that in the future, we'll be going back to kind of the paradigm that the Model T set out — small, cheap, friendlier, but it won't be running on gasoline."

Just about every major automaker is now working on a smaller, electric car. They're running into the same problems Henry Ford faced — limited range and high costs. As we wait for those cars to trickle into the market, a flood of new, low-cost vehicles is expected to hit developing countries. India's Tata Motors is building a car called the Nano that will sell for $2,500. The company is calling it the world's next "people's car."

It will run on gasoline.