Accessibility links
Africa's Oldest National Park In Crisis Virunga National Park in Central Africa is located in what has become a war zone. Its trees are being cut down to support a lucrative, militia-controlled charcoal trade. If the destruction continues unchecked, most of the trees in southern Virunga will be gone in a decade. 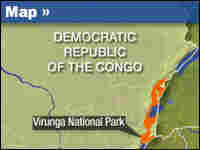 The Threat To Virunga

Watch a video from National Geographic about the problems facing Virunga National Park. 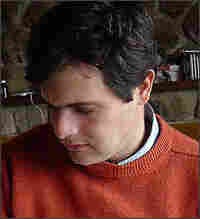 One of the world's great wildlife sanctuaries is literally going up in smoke. The hardwood forests of Virunga National Park in Central Africa are being cut down to support a lucrative — and illegal — trade in charcoal. If the destruction continues at its present rate, most of the trees in southern Virunga will be gone in a decade.

Virunga, founded in 1925, includes the mountains where the late anthropologist Dian Fossey did her research for the book Gorillas in the Mist. But endangered mountain gorillas, several of which were recently found murdered execution-style, are just part of the story.

"There are more mammal, bird and reptile species in Virunga than in any other park in Africa, and possibly even the world," says Emmanuel de Merode, a conservationist who is working with rangers to save the park.

Virunga's problems stem from its location in what has become a war zone. Most of the nearly 2 million-acre park is situated in the Democratic Republic of Congo. But portions sprawl into Rwanda and Uganda. 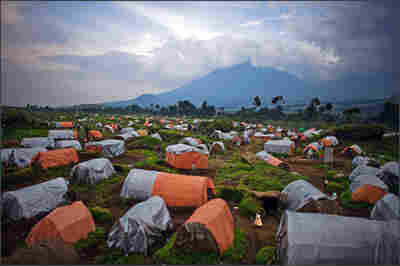 In the wake of the 1994 genocide in Rwanda, when 800,000 Tutsis were killed, hundreds of thousands of refugees showed up along the park's border. Some remain in tent cities, like the one above. Others have moved to the city of Goma, not far away.

The refugees can get food and water from aid agencies. But they have no easy way to get the fuel they need to cook food and to boil water that would otherwise be unsafe to drink.

So they cut down the trees near the edge of Virunga. When those were gone, they began buying charcoal made deep in the park's hardwood forests.

"They have no choice," says de Merode. "They need the charcoal to survive." 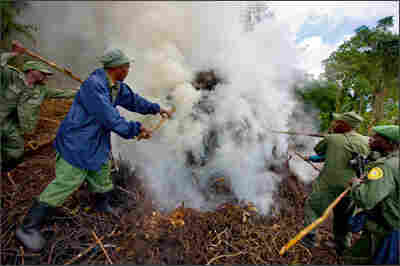 Rangers in Virunga spend much of their time finding and destroying illegal charcoal kilns like the one pictured above. Even so, huge amounts of charcoal are transported out of the park, often with the help of corrupt Congolese soldiers.

De Merode estimates that the illegal trade in charcoal is worth $30 million a year. 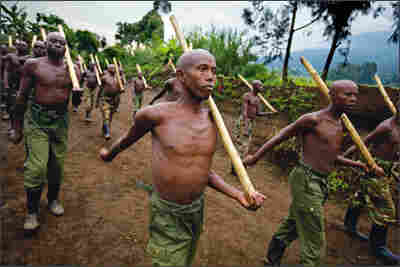 It's been hard to shut down the charcoal trade because much of it is controlled by militias such as the rebel Tutsi fighters shown above. They use money from charcoal to help fund their operations. And anyone who interferes may be killed.

Godefroid Wambale, a park ranger in Virunga, says he's been shot at by rebels. Many of his colleagues have been killed.

"It's dangerous," he says, "but we must protect our national park at whatever cost."

De Merode says the park's 700 rangers are determined. But to go up against the militias, he says, they need better equipment and advanced paramilitary training.

The long-term solution involves providing an alternative to charcoal, says de Merode. So he's trying to launch an industry that would sell cheap briquettes made from grass or wood chips.