Accessibility links
YouTube Monks Storm European Pop Charts The monks of Heiligenkreuz Abbey in Austria sing ancient Gregorian chants in their 12th-century church — and then post them to YouTube. Their technological savvy landed them a record deal, and now their album is storming the European charts and arriving in America. Father Karl Wallner talks to host Andrea Seabrook about balancing pop stardom with the religious life.

The monks of Heiligenkreuz Abbey in Austria sing ancient Gregorian chants in their 12th-century church — and then post them to YouTube. Their technological savvy landed them a record deal, and now their album is storming the European charts and arriving in America. Father Karl Wallner talks to host Andrea Seabrook about balancing pop stardom with the religious life. 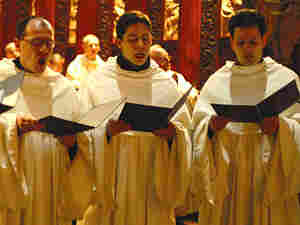 The Cistercian monks of Stift Heiligenkreuz, outside of Vienna, Austria, were signed to a record deal after an executive saw them singing on YouTube. coutesy of Decca/Universal hide caption

The latest sensation on the world's pop charts is 800-years-old. Gregorian chants performed by the Cistercian monks of Austria's Heiligenkreuz Abbey.

SEABROOK: Monks have lived, prayed, and sung at this Abbey since the year 1133. Now they're using the latest technology to get their voices heard. The album is called "Chant: Music for the Soul." It's just been released in the United States.

Father Karl Wallner is a monk at Heiligenkreuz and he joins us now from his record company offices in Berlin. Welcome, Father Karl.

Father KARL WALLNER (Monk): Welcome, yeah, it's very pleasure to talk to you.

SEABROOK: Tell us about these chants. Can you translate some of them for us?

Father WALLNER: Yes of course. Those songs that we are singing, they are really prayers and we are praying every day starting at 5:15 in those prayers to God and it's just our normal prayers that are on the record, yeah. And we are very amazed that now our spirituality with this album goes out of all our old monastery and seems to touch a lot of people, otherwise they wouldn't buy the album.

SEABROOK: What are you praying for?

Father WALLNER: We are not praying for anything because our praying is without any purpose. Our only purpose is to say God that he is great as creator and redeemer of man. And that's the vocation of the Christian monk that is chosen by God to give praise to him because God is so wonderful.

SEABROOK: How old are these chants?

Father WALLNER: Well the chants are very old, yeah. The name Gregorian chants is derived from Pope Gregory the Great. He died in 604 and most of those melodies are more than 900-years-old. When I entered the monastery it was very funny because then when we are exercising, then suddenly they come to the director of music, said, oh, that's a very modern melody and then ask what means modern. Oh it's from the 13th century that's very modern.

SEABROOK: Do you have a favorite, Father Karl?

SEABROOK: Father Karl, it is so beautiful and meditative. But I have to say for someone who's used to a more 20th or 21st century aesthetic, they all sound kind of the same.

Father WALLNER: It sounds quite to be the same, but they are very different. Yeah. When you just have to sing it as a monk, yeah, you will see that it's very complicated. And it's really always different, yeah. You have melodies that make you happy, and you have melodies who sound very sad too. So it might sound for someone who has not yet experienced his ears in listening to Gregorian chant, to plain chant, that it is always the same. But that's really not true. It's one of the most exciting kinds of singing to God.

SEABROOK: How did you come to record this album?

Father WALLNER: Yeah, it had - miracles happen, yeah, and God had his hand over us because we were chosen by Universal Music. Universal Music was looking for the most beautiful voices in the world. And I sent an application on the very last day that was possible, on the 29th of February. And I apologized. I said, we are monastery in Austria and you will not be interested in us.

But the Holy Father is a big fan of our Gregorian chant because he has been here in 2007 and we are full with young vocations and we have very beautiful voices. Just have a look to a video clip at YouTube that was put by young brother there. And on the very next day on the first of March they were calling us from London. Yeah, and then they have chosen us.

SEABROOK: It's so interesting that you're seeing many, many hundreds of year old songs.

Father WALLNER: Yeah, of course, yeah. Well, Cistercian monks live with the rule of Saint Benedict. And it was written 1500 years ago. And even then Saint Benedict says that every monk has to have the instruments to write. Yeah. And I say for nowadays this means that every monk has to have a computer and has to know how to deal with the new medias.

SEABROOK: Does it get uncomfortable a little bit? This much, I don't know, contact and work in the other…

Father WALLNER: No, it's just normal. Yeah, we want that people see how beautiful it is to live very close to God, yeah. We don't want to hide from the world. Of course the monastery has to stay a place of peace, yeah, and a place of concentration to God.

SEABROOK: So you're not going to go on a world tour there. You're not…

Father WALLNER: No, that's very funny because every day about two or three calls, I come in and they ask me to go for tour, to the cathedral of Milan or even to sing at the dinner party of some big company or some - but we say we will never go out for any tour and we will never sing on a stage. Because the intention of our songs is always to praise God. And this would never fit on one of the big stages of the world. So our monastery will stay the only place where people will be able to listen to us.

SEABROOK: A group of Benedictine monks had a hit record also called "Chant" in 1994. Have you heard that album?

Father WALLNER: Yes, of course. Yeah. And this was the reason why we had big concerns because it was the (inaudible) Domingo de Silos in Spain, and they had a lot of problems with dealing with the medias after this. And that's also the reason why we said already before, when nobody had any idea that it could become such a big success, we have to deal with the medias in a strict way, yeah.

I could have TV teams every day, yeah, but it's not fine, and you do not end in a monastery to pray always in front of photographers and TV teams. Yeah. We are open for the medias of course because we want to give testimony to the world, but our life in the monastery will not be disturbed or even destroyed by the success of our album.

SEABROOK: Father Karl Wallner is a Cistercian monk of the Abbey of Heiligenkreuz in Austria. Father Karl, thank you very much.