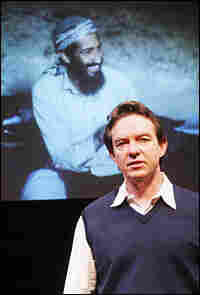 Listen to the author and playwright on:

Despair as a Recruiting Tool

How Americans Are Afraid of Those Who Can Help Us

How Al-Qaida Is Different

How Belgians Are Called Mohammed Now

Watch an Excerpt from 'My Trip to Al-Qaeda'

My Trip to Al-Qaeda, a one-man play in New York, is an emotional journey for the audience and the writer, who plays himself on stage.

Lawrence Wright's award-winning book, The Looming Tower, charted the rise of Islamic fundamentalism. A television documentary that includes his work will be broadcast on PBS in April. Now, his new play documents his quest to understand the rage at the roots of the terrorist group.

The performance is a personal form of his journalism, tracing the backgrounds of the central figures in the horrific events of Sept. 11, 2001. On that day, Wright felt an odd, personal connection.

He had written a screenplay for The Siege, the 1998 film that depicts a terrorist attack in New York that leads to tanks in the streets and the curtailing of civil liberties.

"As time was passing," he said, "I was praying that the plot wouldn't play out exactly as it had in the movie, but step by step, the script unfolded."

By then, Wright was already researching his book, interviewing more than 600 people, including former al-Qaida members. He lived for a time in Saudi Arabia, traveled to Pakistan and Afghanistan. Those experiences are packed into this play.

One of his themes is the state of the American intelligence community, which he says is in worse shape than on Sept. 11. For example, only 25 FBI agents speak fluent Arabic, by the agency's own count.

Wright asks: How can we fight an enemy we don't understand? As for the FBI, he says, "Until they learn how to pronounce the names of al-Qaida suspects, until they learn the principles of Islam that are in dispute, they are always going to have a failure of imagination and a failure to connect the dots."

Wright had his own encounter with the FBI. Agents showed up at his house over what they said were suspicious telephone calls. Now, Wright says, he tells them what he knows from the stage.

"FBI agents have been coming repeatedly to this show and are some of the biggest fans of the show," he says. "They understand the constitutional crisis that this country is in. It's a real moral dilemma for people working in the intelligence agencies."

On stage, he tells stories from his time in Saudi Arabia, recounts the torture of Islamists in Egyptian jails, and describes the despair in a generation of Arabs growing up in stunted economics under repressive regimes. Wright digs deep into al-Qaida's rise and its empty promises.

The performance, being staged at the Culture Project in New York, is more like a seminar than a play, a master class that raises fundamental questions: What is Islam, and what is America? The answers to those questions will determine the future, Wright says.

Lawrence Wright
Wright in 'The New Yorker': The Master Plan