Accessibility links
A Black Man Selling Pepsi In The Jim Crow South In the 1940s, Pepsi created an all-black sales force in an effort to reach out to black consumers. Allen McKellar was part of the first team to sell the soda in the Jim Crow South. 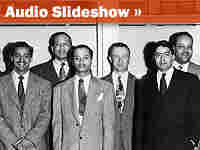 View: Pepsi breaks the color barrier with ads and sales force.
Courtesy of the Queens Museum of Art

Coca-Cola was selling six ounces of its drink for 5 cents, a deal Pepsi tried to undercut by offering twice the beverage for the same amount. In a bid to increase market share, Pepsi CEO Walter Mack decided to reach out to a neglected consumer group — African-Americans.

Mack designed an ad campaign featuring black families and students, and cobbled together an all-black marketing team. From the company's headquarters in Queens, N.Y., Mack sent the salesmen into the Jim Crow South. They rode segregated buses and trains and slept in segregated hotels. They helped to build an enduring brand, smashing the color barrier as they went.

Now their experiences are chronicled in a new book, Stephanie Capparell's The Real Pepsi Challenge, and in an exhibit at the Queens Museum of Art. The first team of salespeople included Allen McKellar, now of St. Louis.

McKellar was finishing his college degree in South Carolina when the school president called him in and asked him to take part in an essay contest sponsored by Pepsi. "I had to write an essay on how America youth faces its future," McKellar says.

As one of 27 finalists, he was called to Pepsi headquarters and was then hired as one of two black members of the first sales team. "I didn't know at the time that we were the first blacks to enter the corporate world," McKellar says. "We learned that when we got out into the marketplace."

For their first assignment, Mack sent them out to Texas. They traveled by train, in a Pullman sleeper car. The conductor gave them a warning about keeping the curtains open. "He explained to us that if we stopped in some of those small Southern cities, they might not like seeing blacks in a Pullman," McKellar says.

Given essentially no training, the rookies improvised their approach to the African-American market. They went straight to black ministers and newspapers, looking for help with basics like lodging. "We ate where we stayed," he remembers.

Their work required them to meet with Pepsi's independent bottlers. All the bottlers were white, McKellar says, but they encountered only a handful who refused to meet with them in the office. In the worst cases, Mack intervened.

The team became unofficial ambassadors. "After we were so successful, everywhere we went, we were headlined in the black newspapers and treated like celebrities, if you will," he says. "Our main objective was to let the young black kids know that there appears to be a move in the right direction of opening up opportunities for blacks to come into the business world, as opposed to teaching school or those few who could become doctors."

For all the social progress at stake, McKellar recalls an all-out battle to capture the soft-drink market. "Wherever there was a vending machine using Coke, we would either move Pepsi in or move Coke out of the position," he says.