Accessibility links
Plans For Paris Skyline Envision City Of Height The Paris city council votes to consider erecting tall buildings on the rim of the low-rise capital. Six new sites, under consideration for completion between 2012 and 2014, could host buildings reaching as high as 656 feet, or a little under two-thirds the height of the Eiffel Tower. 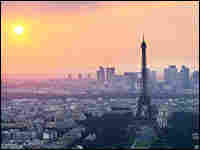 The sun sets behind the Eiffel Tower on June 10 in Paris. Mike Hewitt/Getty Images hide caption 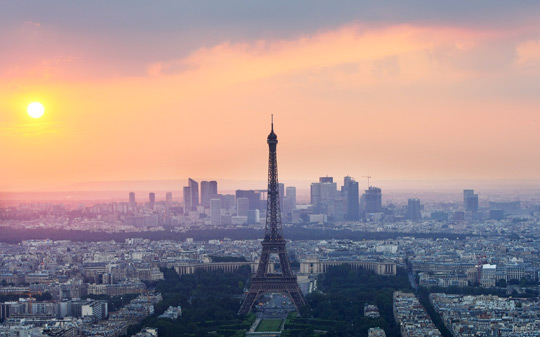 The sun sets behind the Eiffel Tower on June 10 in Paris.

Paris — the city of light — is now looking to add a little bit of height.

The Paris city council voted Tuesday to consider erecting tall buildings on the rim of this historically low-rise capital.

The decision means that six new sites, under consideration for completion between 2012 and 2014, could host buildings reaching as high as 656 feet, or a little under two-thirds the height of the Eiffel Tower.

Though the move, for now, only allows for high-rise buildings on Paris' perimeter, many see it as the beginning of a broader shift, and it has prompted fiery debate about how to adapt the Paris skyline to the 21st century.

Building height limits have changed little in Paris since Baron Haussmann redesigned the city during the mid-19th century, with caps now at 121 feet. Only a handful of exceptions have been made for high-rise projects in recent decades.

Architect Michel Angevin said the height limit "has been a real constraint."

"This is just the beginning. Paris is going to change, and will look very different soon enough," he added.

The city is home to only a scattering of towers, notably including the Montparnasse Tower, which, at 690 feet, stirred controversy when it was built in 1972 and is still considered an eyesore by many Parisians today.

The new initiative was launched by Paris' Socialist Mayor Bertrand Delanoe, and is backed by Socialist and Communist party leaders who supported it in Tuesday's vote.

An unlikely opposition alliance formed against the new skyscraper plan between the conservative UMP, the party of President Nicolas Sarkozy, and the Green Party, which is concerned that such tall buildings take too much energy to build and maintain.

The proposal comes on the heels of another big tower project, the Signal Tower, to be built by prize-winning architect Jean Nouvel just outside Paris in its business district, La Defense. The Signal Tower project was launched at the request of Sarkozy, who hopes to reinvigorate the financial quarter.

From the Associated Press.