Accessibility links
Debussy's Musical Game of Deception The Cleveland Orchestra is matched against Claude Debussy's tennis-inspired ballet Jeux, which conductor Franz Welser-Möst calls one of the most difficult symphonic pieces to perform. 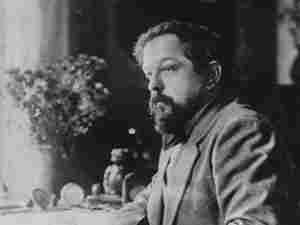 Cleveland Orchestra conductor Franz Welser-Möst says it might sound strange, but Claude Debussy's ballet Jeux is a piece that should somehow sound like a whole lot of "nothing." In conversation with Performance Today's Fred Child, he says when you listen to it, if you feel like there is not much to hold onto, then you have the right reaction.

"Jeux is one of the most difficult pieces ever written for orchestra. To get that one right is so hard."

At the beginning of the ballet, a tennis ball drops on the stage. Then you see a dancer decked out in tennis whites, carrying a racket. And the plot, if you can call it that, revolves around that lost tennis ball. Two women and a man, play a sensual game of hide and seek, supposedly looking for the missing fuzzy ball. There are flirtations, embraces, quarrels, and chases around the garden at dusk.

"It's the hormones that are dancing and you really can't hold on to it. It's a piece that needs an enormous amount of rehearsal time."

Jeux was premiered May 13, 1913 by the Ballet Russe in Paris. Whatever notice it might have gotten at the time was thoroughly drowned out by another premiere at the same theater two weeks later. On the bill that night was the riotous premiere of Stravinsky's The Rite of Spring.