Weigh in on our 'Rocco Roster' 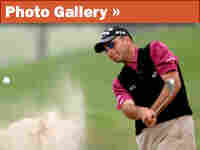 One Italian-American leader says there's still anger in his community over remarks made by NBC golf commentator Johnny Miller.

Last month, during the U.S. Open, Miller referred to golfer Rocco Mediate as looking like "the guy who cleans Tiger's swimming pool." Later, while discussing the prospect that Mediate might win, Miller said, "Guys with the name 'Rocco' don't get on the trophy, do they?"

Miller's comments were criticized, and he later apologized, saying his intention was to convey affection and admiration for Rocco's everyman qualities and had nothing to do with his heritage.

But some Italian-Americans, including A. Kenneth Ciongoli, chairman of the National Italian American Foundation, say Miller's comments demonstrate a double standard in the media.

"It was really an outrageous statement," Ciongoli says. It not only demonstrates what Miller thinks about "men named Rocco," Ciongoli says, but it also shows that the media tolerate denigration of Italian-Americans that it would not permit against other ethnic groups.

"Had he reversed it," Ciongoli says, "and said, 'Tiger should be cleaning Rocco's pool,' he would no longer have his job."

Ciongoli's media criticism is two-pronged. First, he says the media routinely ignore Italian-American achievements in all realms, preferring to focus on fictional depictions of the Mafia, such as The Sopranos. Second, he says Italian-Americans are basically fair game for ridicule because the cultural climate allows it. "Almost any other ethnic group is protected by the media because of their hypersensitivity, but we're not," he says.

"For you or anyone else to say that Italian-Americans get the same treatment as any other ethnic group," Ciongoli says, "it seems to me that you're living in a different world than I'm living in."