Accessibility links
In 'Hellboy,' A Supernatural Smackdown With Soul It takes a special kind of imagination to make something thrilling, emotionally complex and rapturously beautiful out of a vegetable monster's rampage. Good news: Hellboy director Guillermo del Toro has it. 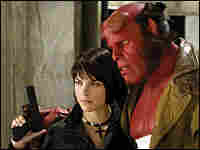 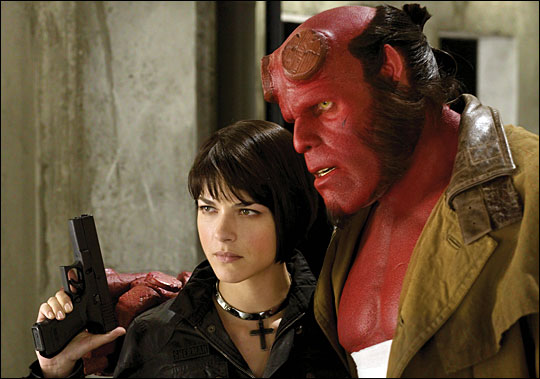 Rated PG-13: It's hard to battle Cthulhu-like creatures without swearing at least a little.

'The Bag Lady And The Cat'

'The Broccoli Wakes The Baby' 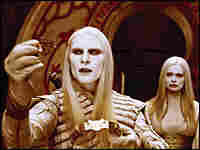 Prince Nuada (Luke Goss, left, with Anna Walton) has his eyes on a fragment of the prize. Egon Endrenyi/Universal Pictures hide caption 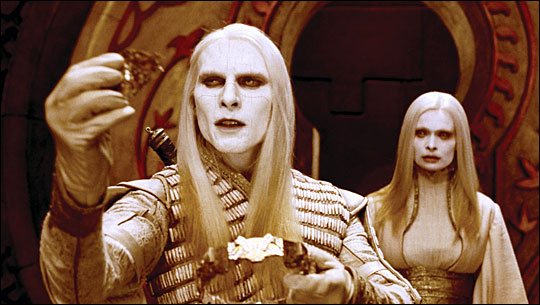 Prince Nuada (Luke Goss, left, with Anna Walton) has his eyes on a fragment of the prize.

Anyone can send an immense, computer-generated vegetable monster rampaging at the base of the Brooklyn Bridge, but it takes a special kind of imagination to do it in a way that's thrilling, emotionally complex, and rapturously beautiful all at once.

The scene in question comes midway through Hellboy II: The Golden Army, the latest film by Guillermo del Toro. Master of both the magic-realist fable (Pan's Labyrinth) and the supercharged blockbuster (Blade II), del Toro has a very special imagination indeed.

Hellboy (Ron Perlman), you'll recall, is a gruff, reluctant demon-hero with a fist of stone and a soft spot for kittens.

In the ensuing smackdown, the Prince taunts Hellboy with the knowledge that this Elemental is the last of its kind, and that to destroy it, no matter how disadvantageous it may prove to New York real estate, will be to render its species extinct. Upon its death, the Elemental releases spores and tendrils and flowering wonders that render its corpse a glimmering, enchanted meadow.

The delicacy of this scene, its moral nuance and mythic resonance, are everywhere on view in Hellboy II, a rare blockbuster with soul. Del Toro brings a meticulous artisanal attention to his material, suffusing it with uncommon subtlety and care.

And for all its comic-book gobbledygook — the plot is sheer delirious nonsense — there's a mischievous, childlike wonder to Hellboy II, a guileless belief in itself and its audience. It's a summer joyride that remembers the joy.

It's also the wittiest thing of its kind since, well, Blade II, del Toro's inspired Afro-futuristic fantasia. The characters feel more settled into their personalities and powers than in the first, overstuffed Hellboy spectacular, and Perlman in particular climbs into his tough red hide with humor and ease.

And there's a splendid newcomer to the team, created by a trio of actors and much CGI: Johann Kraus, a vaporous Teutonic ether-creature contained in a kind of Jules Verne deep-sea contraption.

The biggest flaw of Hellboy II as action movie is the best quality of Hellboy II as folkloric tragicomedy. Prince Nuada makes for a strangely sympathetic villain; his diabolical tantrums lack a definite sense of menace or fear. Del Toro doesn't stint on the thrills and chills, but he never really works up a truly apocalyptic vibe. His imagination tends more to metamorphosis and myth than to stark Manichean conflict, making him one of the more complex fantasists in Hollywood — and one of the most satisfying.