Accessibility links
Salmonella Scare Hurts Calif. Tomato Growers Even though the Food and Drug Administration never suspected California tomatoes in a recent salmonella outbreak, the scare has affected California growers, who are just starting to harvest their tomatoes. 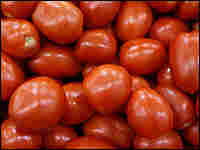 Tomatoes are the main focus of an FDA probe into a salmonella outbreak in the United States. Scott Olson/Getty Images hide caption

At the weekly farmers market in downtown Culver City, Calif., there are gorgeous peaches in full blush, picture-perfect carrots and aromatic basil. But overflowing pyramids of fresh tomatoes are missing.

"Maybe these farmers don't choose to bring them because their sales are so low because of the press," Donald Yasukochi says with some annoyance as he shucks corn he's brought up from Oceanside.

The Food and Drug Administration announced Wednesday that the salmonella outbreak has sickened more than 1,000 people — making it the worst food outbreak in years.

Even thought the FDA never suspected California tomatoes, the salmonella scare has clearly hurt California growers, who are just starting to harvest their tomatoes.

Yasukochi estimates his own sales are down about 60 percent, but he feels fortunate that tomatoes aren't the bulk of his crops.

"For our industry, this is the economic equivalent of capital punishment," says Tom Nassif, president and CEO of Western Growers, a cooperative association of farms in California and Arizona. The cooperative produces about 50 percent of the fruits, vegetables and tree nuts on the U.S. market.

The FDA warnings have depressed Western tomato sales so thoroughly, Nassif says, that some of his members say there's no point in even bringing their produce to market.

"Our folks are not harvesting; they're letting them rot on the vine or they're bulldozing plants in the fields in the hopes that they can plant something else that will let them recover some of the revenue that they've lost from tomatoes," he says.

Earlier this week, the FDA and the Centers for Disease Control and Prevention said they had broadened their salmonella investigation to consider sources other than tomatoes, such as cilantro, jalapeno peppers and serrano peppers.

Nassif says that when the FDA issues consumer warnings before it has a good handle on the possible culprit, the economic devastation goes beyond farmers.

"The people who pick in the field, the workers who grow it, the people who harvest it," he says. "You affect the packing shed workers, which affects the truckers."

The biggest fear, Nassif says, is that this year's tomato scare could end up being last year's spinach scare, which affected markets worldwide.

"These outbreaks and advisories tend to have long-term effect on consumption patterns," he says. "We never regained our market in spinach — even though that was an isolated incident, potentially in one field, in one processing plant, in one day."

Colleen Sutherland says the advisories have put a dent in her business at Lark Farms.

"People were just scared because of the news about tomatoes and not knowing where they came from," she says.

Robin Mergio says she comes to the farmers market every week to buy tomatoes. "They're always fine," she says. "There's never anything wrong with them."

For the nation's tomato farmers, however, perceived risk can be as economically devastating as the real thing.