Accessibility links
Exene Cervenka: From X To Missouri Priestess of punk Exene Cervenka co-fronted X, one of L.A.'s most enduring underground bands from the '70s. Cervenka has always had a bit of a twang in her music; now she lives in central Missouri, working on a new collection of songs and art collages. Her art will appear later this month in New York City. 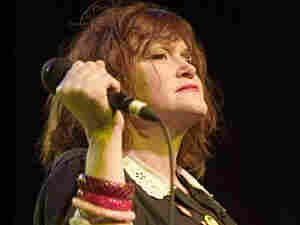 London had The Sex Pistols. New York had the Ramones. And Los Angeles had X — the punk band that blended the rockabilly guitar of Billy Zoom with the lyrics and wailing vocals of John Doe and Exene Cervenka. In the 31 years since X was created, disbanded, and re-formed, Cervenka has continued to tour with the band, as well as make albums with ex-husband John Doe as The Knitters and release albums of her own. She's also begun to make visual art.

She assembles these scraps of quirky Americana into collages. Art critics describe them as folk art, and they evoke an unsettling innocence — postcards from the American road.

Dennis Christie is co-owner of DCKT Contemporary, an art gallery in New York City that has just opened its second show of Cervenka's work. Like many art-world thirtysomethings, Christie can remember the exact time and place that he first heard an X song. Cervenka's music followed Christie's career through his adulthood and into his own career as an art dealer. Four years ago, he read in ArtNews Magazine about a show of her collages in Santa Monica. He got on a plane, viewed the work, and immediately began plotting to bring the show to New York, which he did in 2006.

Christie says there's a thread going through all of Cervenka's art projects — a sense of place. The objects she puts in her collages used to come from the road, but now they come from old photographs and artifacts found at Missouri country auctions.

"I think isolation is the only way to create," she says. "I think that's why the punk scene worked out so well, is every city was totally isolated. And there was a vacuum... so everyone was doing whatever the f--- they felt like. And then, that way, it came out all original. Now, it's impossible to create in a vacuum, so you have to kind of isolate yourself in a big old farmhouse, I think. And just be a quirky weirdo. And not let the outside world influence too much what you write or come up with."

Cervenka's isolated life is punctuated with frequent tours. She's on the road most of this year, performing with X, The Knitters, and her own band, the Original Sinners. The summer will also bring a new project: Cervenka begins recording some recent songs, which she hopes to do from the agitated quiet of her own living room.