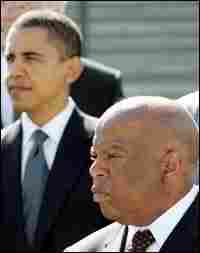 Rep. John Lewis (D-GA) is one of the heroes of the civil rights movement. In 1965, he led a march for voting rights across the Edmund Pettis Bridge in Selma, Alabama. He and others were badly beaten by police. Lewis has returned each year to commemorate the Bloody Sunday anniversary.

As a civil-rights hero, the endorsement of Rep. Lewis is valued by presidential hopefuls — including Sen. Barack Obama of Illinois and Sen. Hillary Clinton of New York. Lewis talks with Juan Williams about being courted by two Democratic rivals.

Why is this a hard decision?

First of all, I think it's much too early to endorse. And, second, they're both friends. It's a tough decision. And some would like to put the decision off as long as possible.

Barack Obama represents something different, something new, something very exciting. He's hot; he's almost like a rock star. But it's more than just a new face.

There's something about him that he's able to tap into this growing sense of discontent in America. He has an appeal that go far beyond race; he is able to arouse the interest, yes, of African American voters, white voters, women and all segments of the American society.

Well, what's curious to me is his base has been in the white community, not the black community. What do you make of that?

For a long time, many African-Americans didn't know Mr. Obama, so they're getting to know him. That's why it was important for him to show up in Selma and be visible in the heart of the American South.

But he ran in a state that is majority white and he got elected. And I think he will continue to pull together a very large crowd, similar to what Bobby Kennedy did in 1968.

You see analogies to Bobby Kennedy?

Obama may be the first candidate for president since Robert Kennedy to energize such a unbelievable make-up of the American quilt.

Let me ask you about how Hillary Clinton reflects changes in American politics that you have worked a lifetime to try to create, opening doors for people.

I think Senator Hillary Clinton has opened doors; she entered doors that maybe other people opened: Shirley Chisholm, Carol Moseley Braun, and others, ran for president.

How are the campaigns approaching you in seeking your endorsement? Do they call?

I've talked with President Clinton and I've had a call from Mrs. Clinton, but neither have asked for support; they just asked how do I think things are going. And Mr. Obama has called and asked for my help and my support.

So Mr. Obama has asked for your endorsement, but Mrs. Clinton has not?

Mr. Obama has asked for my endorsement; we have talked. I've said, "Senator, my friend, my brother, let us continue to talk, I would like to be helpful."

Do you think that Mrs. Clinton or Barack Obama are going to, at some point, say we need you to do it now?

I don't think Mrs. Clinton or Mr. Obama are going to put any undue pressure on me.

Why do you think your endorsement matters so much to the two frontrunners for the Democratic nomination for president of the United States?

I think an endorsement from me, or some other elected officials who happen to be African American from the Deep South, who have played a role in the civil rights movement, could be helpful encouraging other African Americans in these key primary states.

When you look at the reluctance of some of the civil rights leaders now to embrace Obama, I'm wondering, are they just more comfortable because the Clintons are a known quantity, as opposed to this unknown quantity in Obama?

Well, I have heard some African-American elected officials say, "I know President Clinton, I know Hillary, they've been around a while, they know the song;" you know, Bill Clinton is one of the few presidents that can stand up and sing every verse of "Lift Every Voice and Sing."

I can remember a few short years ago, candidate Bill Clinton came to Capitol Hill, two young black men said to me, congressman, Bill Clinton acts more like a brother than a lot of brothers. So, it's a connection there.

Well, what would you say about Mrs. Clinton?

There is this feeling, I think, that if the president is good, if the husband is good, then the wife is going to be good and Mrs. Clinton would be good as president. I think it has some of that.

Going forward, do you find it surprising that you have two candidates competing in this way? Is that something that you could have envisioned back in the days when you were fighting for voting rights?

No. If someone had told me back in 1965 — 42 years ago when we were walking across that bridge in Selma, Ala. — that one day a white woman and a black man would be vying for the African American vote, I would say, "you're crazy, you're out of your mind, you don't know what you're talking about."

It's a different world, but it says something about the distance we've come. It's a good position to be in.