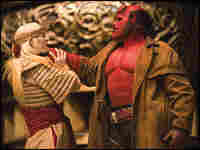 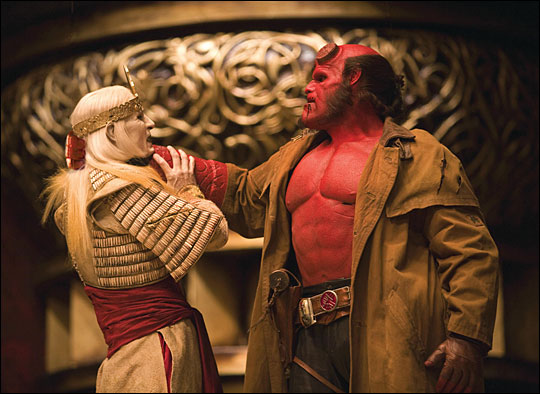 Though skilled with swords, Prince Nuada (Luke Goss) is no match for the pure brawn of Hellboy (Ron Perlman).

Rated PG-13: It's hard to battle Cthulhu-like creatures without swearing at least a little.

'The Broccoli Wakes The Baby' 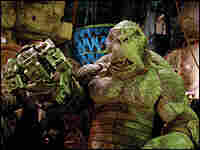 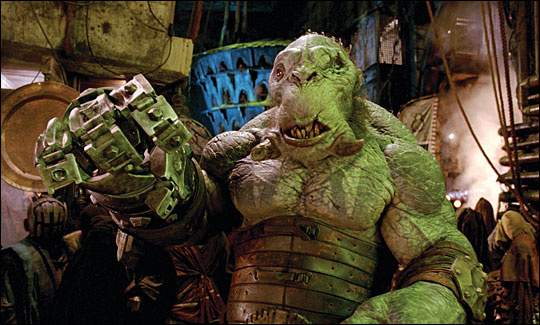 Comic-book movies can make it easy to forget why you loved the original comics back in the day. Hellboy II: The Golden Army will help you remember.

Guillermo del Toro, who won a trio of Oscars for Pan's Labyrinth, has a singular approach. As writer and director of Hellboy II, he is almost alone in his ability to re-create on screen the wide-eyed exhilaration and disturbing grotesqueness that is the legacy of comics on the page.

The backstory to Hellboy II is that a long-ago elf king created an unstoppable army of huge golden warriors. At the last minute, much to the disgust of his confrontational son, the king had second thoughts and locked the fierce army away.

Anyone who thinks it will stay locked away doesn't go to a lot of movies.

Cut to the present day, where the king's son returns in a very bad mood. Irked at the way humans have destroyed the Earth — I warned you about buying that Hummer — he makes plans to wake up that sleeping army.

Trying to stop him is hot-tempered Hellboy, a reluctant hero who's angry because the public never believes he's one of the good guys. Assigned to help: the strange Johann, who knows how to push Hellboy's buttons.

Hellboy II may be a film taken from a comic book, but the passion of del Toro — so into the story he did the creature vocals — helps us forget that.

And it makes us eager for his next announced project, J.R.R. Tolkien's The Hobbit — where del Toro's prodigious gifts will be deployed in the service of one of the great fantasy franchises of modern times.

That should really be something to see.