Accessibility links
Percussive Thunder and Showers of Brass Antibalas' nearly 13-minute Afrobeat epic "Sanctuary" unwinds with a graceful, unhurried pace that ever-so-slowly builds steam with each rhythmic reiteration. Though the bassline anchors the song, Antibalas works in a marvelously subtle mix of other elements. 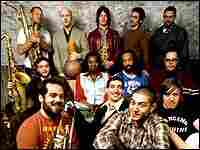 It's no secret that Nigerian Afrobeat pioneer Fela Kuti was highly influenced by the funk inspirations of James Brown. But in contrast to the fast, furious singles churned out by Brown and the JBs, Kuti preferred the "go slow" method, a nod to the plague of traffic jams inflicted upon many Nigerian cities. The best Afrobeat songs don't throw down lightning bolts from the first downbeat, but rather unfurl in slow, rolling peals of percussive thunder and intermittent brass showers.

New York's Antibalas (a.k.a. Antibalas Afrobeat Orchestra) has mastered the best traditions of Kuti's craft, especially the importance of patience. The nearly 13-minute "Sanctuary" unwinds with a graceful, unhurried pace that ever-so-slowly builds steam with each rhythmic reiteration. Though the bassline, fittingly, anchors the song, Antibalas works in a marvelously subtle mix of other elements: a contrapuntal rhythm guitar, an array of distinctively different organs and keyboards, a precision horn section, and a mellifluous background sprinkling of what sounds like a cross between an mbira thumb piano and Rhodes electric piano.

All of this lopes along until the halfway mark, when the rest of the band falls away for two bars, leaving only a shuffle rattle and congas, and then the vocals drop in after six minutes of instrumental grooving. Even then, it's only into the last two minutes that the song reaches what might be called a climax, but it's less bombastic and more a moment of intensity that holds for a few heartbeats, then unclenches and gently eases itself into a long fade-out. "Sanctuary" is best enjoyed as a journey, and though it's long enough to pack in four times the number of conventional pop songs, the lure to start down the path again remains enticing.