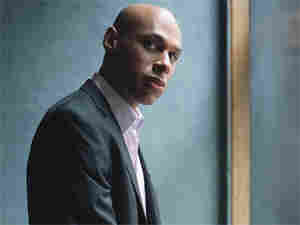 Tenor saxophonist Joshua Redman was one of the founding members of the SF Jazz Collective. Michael Wilson hide caption

JazzSet comes from historic Orchestra Hall in the great city by the lake, Chicago. But our music is an offering from the city by the Bay: San Francisco's SF Jazz Collective.

This particular line-up included the legendary Bobby Hutcherson on vibraphone, Miguel Zenon playing alto, Nicholas Payton on trumpet, Isaac Smith on trombone, Rene Rosnes on piano, Matt Penman on bass, and Eric Harland on drums. Redman leads the ensemble on tenor, while the ninth member of the octet is behind the scenes: arranger Gil Goldstein.

Since 2004, the Collective has been the ensemble-in-residence at SFJAZZ, an organization which presents more than 200 concerts a year, including the San Francisco Jazz Festival in the fall and SFJAZZ in the spring.

At the Chicago Symphony Center, the repertoire includes newly commissioned pieces from within the band, plus music by John Coltrane. The ensemble's writing and playing, the soloing, the precision, the inspiration, and the energy all help make this an ensemble to be heard. Recordings from the 2005 tour were collected on the CD Live 2005: 2nd Annual Tour, which is available from the SFJAZZ Web site.

Creators at Carnegie: The Joshua Redman Trio May 26, 2007