Accessibility links
James Ehnes: A Little Recital And A Grammy The young Canadian violinist's recent Grammy victory was touted by one critic as a "triumph of excellence over hype." Ehnes demonstrates why with a small solo performance of Bach works — the last music session at WNYC's old studios.

James Ehnes: A Little Recital And A Grammy

Prelude from Violin Partita No. 3

Allegro Assai from Violin Sonata No. 3 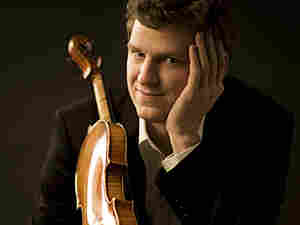 James Ehnes recently performed the Tchaikovsky violin concerto with the New York Philharmonic — the same piece he played with the orchestra five years previous, when he proposed to his girlfriend afterward. Benjamin Ealovega hide caption

When James Ehnes won a Grammy earlier this year for his recording of Barber, Korngold, and Walton violin concertos, the win was touted by one critic as a "triumph of excellence over hype."

The 32-year-old Canadian violinist glided past the competition, which included such superstar figures as pianist Lang Lang and conductor Simon Rattle. But classical insiders have known of James Ehnes for quite some time.

In the final episode of Soundcheck ever broadcast from WNYC's old studios near City Hall in Manhattan, Ehnes spoke to host John Schaefer about the win. He also brought along his 1715 ex-Marsick Stradivarius violin for a solo performance of a few Bach works.

Fortunately, he's never accidentally left his instrument behind in a taxi, unlike his former classmate Philippe Quint. Ehnes spoke about carrying around an instrument worth seven figures.

"It's not easy to describe the relationship that a player has with their instrument," he says. "I mean, it's a professional tool in a certain sense, so — that sounds terrible, I mean, of course primarily it's this incredible work of art. But it is a tool, and we have to play it. It would do nobody any good if all the greatest instruments were locked up in a room somewhere."

Ehnes' Stradivarius violin, which he has on loan from a collector on the West Coast, was used to record the album which netted him the Grammy. He says he doesn't fully understand the impact of the award yet, flattering as it is.

"It's a funny feeling when you win an award for a CD," he says. "I mean, this was a CD which I taped several years ago. You know, you record it, and there's all the post-production and the printing of the booklet and the pressing of the disc, and then it gets into stores, and then people listen to it, and then maybe it gets nominated, and then there's a nomination process. I mean, it's a very funny feeling, because this award happened for something [where] I think, 'Well, I've done so much since then.'"

The award-winning disc was recorded with conductor Bramwell Tovey, with whom Ehnes has enjoyed a long-standing musical relationship.

"When Bramwell first came to Canada, I was about 13 years old," Ehnes says. "And he really took me under his wing, gave me my first opportunities, a lot of my first performances of major repertoire. So he's been a really, really special person in my life, and has become a very good friend."

"It was kind of fun," he says. "That night, I got to watch myself propose every half hour on NY1."