Accessibility links
Forget The Granola: Camp Cooking Goes Gourmet Camp cooking doesn't have to mean dehydrated, over-salted soups and powdered potatoes. With a little experimentation and forethought, most cooks can turn out fantastic meals from scratch — even outside of a kitchen. 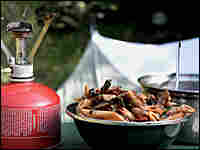 Escaping into the wilderness doesn't have to mean leaving good food behind. A little preparation before hitting the trail makes dishes like penne pasta with vegetables a cinch. Nicole Spiridakis for NPR hide caption 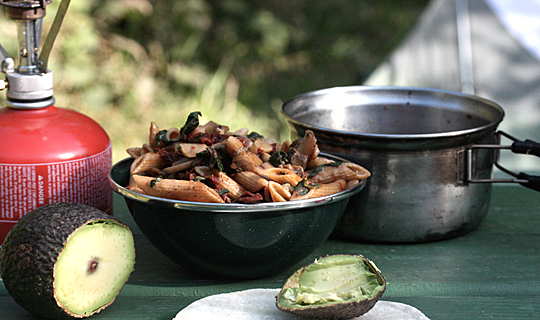 Escaping into the wilderness doesn't have to mean leaving good food behind. A little preparation before hitting the trail makes dishes like penne pasta with vegetables a cinch.

The first time I went backpacking, I feasted on semi-raw hot dogs cooked over a driftwood fire (we'd forgotten to bring the stove) and sipped tea laced with ashes as chilly Northern California winds blew the fog in. The next morning, my brother, a friend and I rose early to dine on crumbling granola bars and lukewarm water.

At 14, I didn't think about food much, but even then I felt we could have done better. Still, falling asleep with the sound of the Pacific Ocean in my ears made up for the paltry (and undercooked) rations, and I vowed the next time would be different. Things are quite different now.

Camp cooking — or cooking in the wild, as I call it — doesn't have to mean dehydrated, over-salted soups and powdered potatoes. It can, of course, if your taste runs in that direction, but with a little experimentation and forethought, most cooks can turn out fantastic meals from scratch — even outside of a kitchen.

Years of backpacking in various parts of the United States have taught me that while a box of organic macaroni and cheese is easy to prepare after a long day of lugging a heavy pack up and down mountains, it's not nearly as satisfying as quinoa chowder or fresh vegetables roasted over a fire.

These days my pack is filled with a small container of olive oil, dried herbs, salt and pepper and fresh fruit rather than packets of dehydrated beans and rice or bags of quick-cooking oatmeal flavored with desiccated strawberries.

I tried my hand at outdoor cuisine in earnest a few summers ago. Before setting out for Wildcat Camp in the Point Reyes National Seashore, I lingered in front of the dried soup packets at the grocery store but was put off by all the preservatives (and salt) on the ingredients lists. I'd been thinking of attempting a more elaborate meal en plein air, so I took a deep breath and moved away from the pre-made stuff.

I carefully considered my options. I wanted something fairly light to carry (it was a 6-mile hike to the campground, so weight was of the essence) and something that wouldn't take too much time or fuel to cook. I also knew I'd be tired and in need of protein, but the main thing was that it had to taste good.

I decided on sauteed portabella mushrooms mixed with sliced tofu cooked in a bit of olive oil, paired with potatoes baked in the coals of the fire we made on the beach a short walk from our campsite. To start off, apple slices with a bit of cheese and bread dipped in olive oil and salt; to finish, squares of dark chocolate. I'd forgone the wine, but cold water freshly filtered from a nearby stream was just as sweet.

As I lit the small propane camp stove and set about my preparations, I warily eyed a small skunk that seemed bent on keeping me company. Close by, a deer picked its delicate way through the campground's tall grasses, and the breeze smelled of salt and bay leaves. I didn't miss my kitchen at all.

If you car camp, you'll have more options (think coolers packed with all sorts of delicacies and cast iron pans for campfire desserts), but if you decide to make it a longer excursion (think a few days on the Appalachian Trail or along the Pacific Crest Trail) light is the way to go.

My recipes call for using a campfire or a stove. Most campsites, unless you're miles away in the back country of, say, Yosemite National Park, are equipped with a grill and a picnic table, which is helpful for preparation. Before you set out, check with the ranger to make sure fires are allowed (sometimes it's too dry and the fire danger is too high). Otherwise, adapt your menu to dishes that can be cooked on a portable stove.

Some things to remember:

• Consider altitude when planning meals, as water boils at lower temperatures at higher elevations, so cooking time has to be increased. If you're high above sea level, opt for faster-cooking starches such as couscous, orzo and small pastas.

• Try to plan ahead and do all you can in advance – repackage and premix dry ingredients and even cook a few things ahead of time.

• If you're hankering for a hunk of meat after your first day on the trail, plan to eat it only on the first night to avoid risk of spoilage. Freeze it the night before you set out, wrap securely in foil and let it defrost during the day until it's time to cook it for dinner.

• To up the vegetable ante, if you make a fire, wrap potatoes, sweet potatoes or corn in foil and place them in the coals. Try sticking some cloves of garlic in with the potatoes. These are a bit heavier to carry if you're on a long hike, so make them the first night for the added benefit of a lighter pack when setting out the next day.

For the most part, I make do with a couple of battered, lightweight pots, some utensils and a few plates and bowls. I must concede a wooden spoon would probably be helpful — and at least one sharp knife is essential — but it's certainly possible to get by with less. Part of the joy of escaping into the wilderness is to leave the trappings of regular life behind.

Still — getting away from it all doesn't mean you can't bring a little bit of the kitchen with you on the trail. 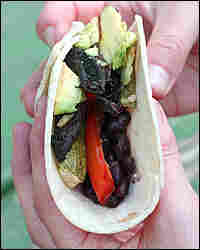 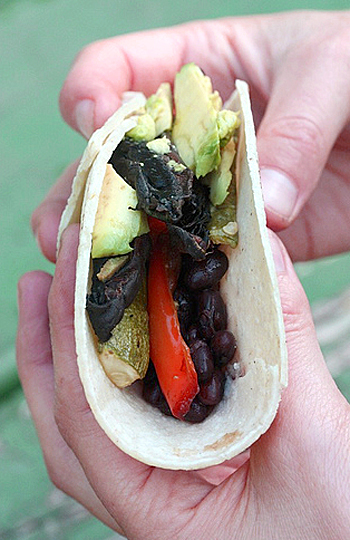 This recipe is easily doubled or quadrupled for a crowd. You may substitute or add other vegetables — such as different squashes or sliced carrots — depending on personal taste.

At home: Transfer the beans from the can into a small container. Wash the vegetables and let them dry before packing. Peel the onion and cut into large wedges from top to bottom. Cut the tops from the bell peppers, remove the core and cut into large pieces from top to bottom. Trim the ends from the squash and cut diagonally into round shapes, about a half-inch thick. Put the vegetables in a zip-top bag for carrying.

Mix the salt, pepper and basil in another small bag.

In camp: Toss all of the vegetables with olive oil and seasoning. Cook the vegetables on a very hot grill, turning occasionally, until the peppers are slightly charred and the vegetables are tender. If you are using a portable stove instead of a grill, sautee the vegetables in a pan for about 5 minutes.

Split the avocado in half and remove the peel and pit. Cut the halves into thick wedges.

To assemble, take a tortilla and layer with black beans and the grilled vegetables, and top with slices of avocado. 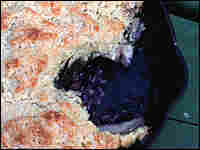 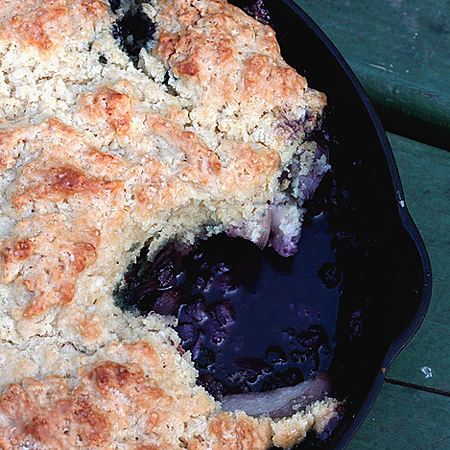 Make this when you don't have far to hike in or are "car camping." You may pre-mix the dry ingredients and add the butter when you're ready to cook the fruit.

1/2 to 1 cup sugar, depending on fruit's sweetness

At home: Mix together the dry ingredients, except sugar, and place in a bag. Pack sugar separately. Measure out the buttermilk and transfer to a small container.

In camp: Set up the fire and place a grill about 4 inches above the flame. Cut the fruit into chunks and toss with the sugar. Add the fruit to a heavy, cast-iron 5-quart Dutch oven or a deep cast-iron skillet.

For the biscuits, place the pre-mixed dry ingredients in a bowl. Cut the butter into the flour mixture until the butter is the size of small peas. Stir in the buttermilk, just until the batter comes together.

Drop dollops of the dough in an even layer over the fruit. Cover the Dutch oven and put the cobbler on the grill. Cook until the biscuits are cooked all the way through, about 30 to 45 minutes. 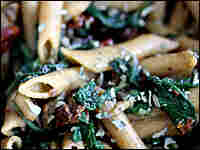 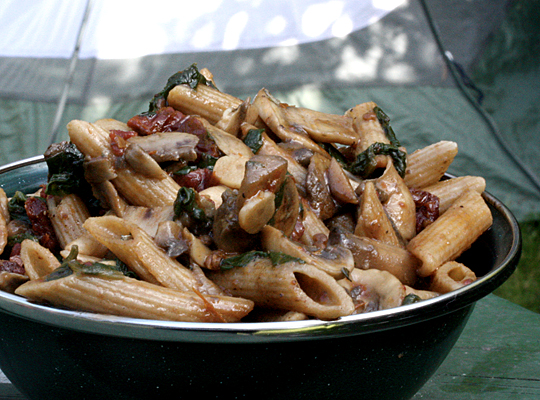 I like to use whole-wheat pasta because of the added nutritional kick. If I've been hiking for more than a few miles, I like to treat my body to as many vegetables and grains as it can stand.

At home: Boil a cup of water and add the tomatoes. Let steep, covered, for 10 minutes, then drain and put into a zip-top bag. Combine the onion, garlic, mushrooms, basil and oregano in another bag. Measure out the penne, and carry the chard separately.

In camp: Bring 3 cups of water to a boil in a medium-sized pot. Add the pasta and the vegetable bouillon and cook until al dente. Remove from heat and drain if necessary, reserving some of the cooking liquid in the pot.

In another pot, heat the olive oil and add the contents of the bag with the onion, garlic, mushrooms and dried herbs. Cook a few minutes. Lower the heat and add the chard and sun-dried tomatoes, stirring vigorously to wilt the greens. Remove from heat and stir into the pot containing the penne. Add salt and pepper to taste. 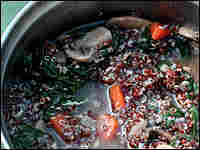 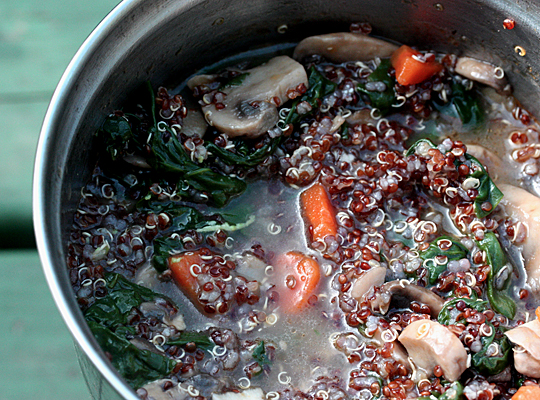 My brother and I spent countless summers camping at Wildcat Camp in the Point Reyes National Seashore in Northern California. One of our favorite first-night meals was a boxed quinoa chowder made by Seeds of Change. The company discontinued the mix, so I've come up with my own version. Quinoa is high in protein and extremely quick to cook, which makes it an ideal grain to bring along on camping trips.

At home: If you buy in bulk, quinoa must be washed before cooking because it has a bitter-tasting coating. Wash and let dry. However, if you buy it in a box, pre-washing isn't necessary. Cut up the mushrooms, garlic and carrots and place in a bag. Store the spinach and snow peas separately.

In camp: Place the quinoa, bouillon cube, mushrooms, garlic and carrots in 3 cups of water and bring to a boil. Cook for 10 to 15 minutes, until the quinoa has begun to soften and the vegetables are cooked through. Stir in the spinach and snow peas or green beans and cook a few more minutes over low heat until wilted. Salt and pepper to taste.