Accessibility links
'The Tudors': Showtime's Update of a Monarchy Showtime's new series The Tudors offers what could be seen as parallels between the reign of Henry VIII and the current Bush administration. At heart, however, the show is a steamy, violent soap opera.

Listen
'The Tudors': Showtime's Update of a Monarchy

Showtime's new series The Tudors offers what could be seen as parallels between the reign of Henry VIII and the current Bush administration. At heart, however, the show is a steamy, violent soap opera. 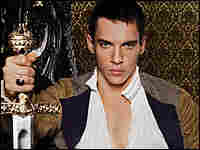 Back now with DAY TO DAY.

Writers from Shakespeare to Mark Twain have depicted England's King Henry VIII in the last years of his reign, but a new Showtime TV series called "The Tudors" begins Sunday, and it's about a younger Henry. Here's TV critic Andrew Wallenstein.

ANDREW WALLENSTEIN: The Irish actor Jonathan Rhys Meyers may not seem an obvious choice to play Henry VIII. Typically, the role is played by a much older, larger actor. That's because he's often depicted in the period of his life when his voracious appetite, be it for food or women, has already taken its toll.

But Meyers plays the king before the era he is known for most, when he went through six different wives, and if you can get past this series' tawdry indulgences, Showtime proves there's fresh ground to be found.

"The Tudors" picks up when Henry is 24 years old and new to the throne. His inexperience shows. The king is depicted as very dependent on advisors with questionable motives. He's also hungry for the glory he thinks only war will bring him. In this scene, Henry VIII discusses military objectives with his advisor, Sir Thomas More, played by Jeremy Northam.

(Soundbite of television show, "The Tudors")

Mr. JEREMY NORTHAM (Actor): (As Sir Thomas More) Harry, Harry, I must urge you that instead of spending ruinous amounts of money going to war, you should spend it rather on the welfare of your people.

Mr. JONATHAN RHYS MEYERS (Actor): (As King Henry VIII) Thomas, I swear to you, I intend to be a just ruler, but tell me this. Why is Henry V remembered? Because he endowed universities, built alms houses for the destitute?

WALLENSTEIN: Hmm, does that sound like any other world leaders you know? It's fascinating how 16th century England starts to sound like 21st century America. The parallel is only heightened by another advisor of the king's, the Machiavellian Cardinal Wolsey, played with a nicely understated menace by Sam Neill.

Wolsey may be a man of the cloth, but his manipulative ways might remind some of Dick Cheney. Wolsey isn't Henry's only problem. He resents his wife, Queen Katherine of Aragon, for not producing a son and ends up knocking up one of her ladies in waiting.

Much of "The Tudors" is devoted to bed-hopping, rendered with all the discretion we've come to expect from premium cable. I found myself more drawn to the power struggles than the bodice-ripping, like in this scene, when the king faces a challenge from within his own court by the treacherous Lord Buckingham, played by Steven Waddington.

(Soundbite of television show, "The Tudors")

Mr. STEVEN WADDINGTON (Actor): (As Lord Buckingham) I demand that Your Majesty banish him from court with whatever other punishment Your Majesty sees fit.

Mr. WADDINGTON: (As Buckingham) She doesn't need to. The offense is against me and against my family.

Mr. MEYERS: (As King Henry VIII) As far as I know, there has been no offense, so there is no need for any punishment.

WALLENSTEIN: If royal intrigue isn't your thing, "Tudors" is a visual feast. The production is a sumptuous recreation of 16th century splendor, and the most beautiful thing of all might be Meyers himself. With unblemished skin and toned abs, he's not what you might expect of Henry VIII, but "The Tudors" shows there's more to this king than what meets the eye.

CHADWICK: Andrew Wallenstein, he's an editor with The Hollywood Reporter.