Accessibility links
Betancourt Speaks About Captivity, Freedom In an interview Thursday with NPR, former hostage Ingrid Betancourt says her Catholic faith helped pull her through a six-year ordeal in Colombia, where she learned the value of "the sharing of despair." 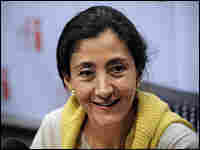 Former hostage Ingrid Betancourt said her Catholic faith helped pull her through a six-year ordeal in Colombia, where she learned the value of "the sharing of despair."

"The only thing I've settled in my mind is I want to forgive," she said in an interview Thursday with Eleanor Beardsley. "I have to forget in order to find peace in my soul and be able to forgive."

Betancourt, who was freed from the Revolutionary Armed Forces of Colombia (FARC) a week ago in a spectacular jungle rescue, spoke at the Hotel Meurice in Paris. She has dual citizenship in France and her two children live there.

Looking frail but elegant, Betancourt arrived with her 22-year-old daughter and several aides. She wore a dark suit. The hair she never cut during six years of captivity trailed down her back in a ponytail. She said she wouldn't cut it until other hostages still held in the Colombian jungle were freed.

Betancourt said her initial elation at being rescued gave way to utter exhaustion. She now fears she may slip into a depression. She spoke quietly and slowly about her ordeal.

"The important thing was to fill the day with activities that could be repeated like in a schedule so like to give you stability in a world of no stability," Betancourt said. "That was the key."

Betancourt was campaigning for the Colombian presidency in February 2002 when she was taken hostage by FARC guerillas. The Marxist group has been fighting the Colombian government for 40 years and holds more than 700 hostages.

Betancourt was one of 44 high-profile political captives. The group included three American contractors who Betancourt met during their five years in the jungle.

"It was very difficult for them because they arrived and only one of them could speak the language," Betancourt said. "They had gone through hard conditions. When they were put in the same group as us, in the same camp, I think that they found a way of sharing with others what they thought was only happening to them. The sharing is important — the sharing of despair."

The hostages were chained to a tree every day, and Betancourt said they were tormented and tortured. She was one of the few women being held by the FARC. Betancourt has so far refused to speak of the grimmer details of her captivity.

"I know that I have to give testimony about all the things I lived, but I need time," she said. "It's not easy to talk about things that are still hurting. Probably it will hurt all my life."

Betancourt said she would eventually testify about what happened in the jungle. She and the American captives were rescued in a military operation carried out by the Colombian army.

Pretending to be FARC guerillas, Colombian soldiers spirited Betancourt, the Americans and 11 other hostages away on a helicopter. Betancourt called her rescue a miracle and said she was still trying to adjust to her new freedom.

"I know that now this is the time to retreat, to be with my family," she said. "You know I'm landing like a parachute in the life of others. They have their lives, their daily activities and I don't have anything."

Betancourt said eating good food, sleeping in a bed and being with her children was a blessing. She plans to work for the release of the remaining hostages still held in the Colombian jungle.