Accessibility links
Latinas For McCain, Finding Fault With Obama The group Latinas for McCain includes a mix of Republicans, Democrats and independents. For many, their choice has more to do with negative things they believe about Sen. Barack Obama, than positive things about Sen. John McCain.

The group Latinas for McCain includes a mix of Republicans, Democrats and independents. For many, their choice has more to do with negative things they believe about Sen. Barack Obama, than positive things about Sen. John McCain.

As David found, some of them are backing McCain for reasons that have more to do with their feelings about Barack Obama.

DAVID GREENE: Yolanda's a Democrat. She supported New Mexico Governor Bill Richardson in the Nevada caucuses in January, but now that Barack Obama appears to be the Democratic nominee, Yolanda's organizing for John McCain. One reason is McCain's age.

YOLANDA MURRO: Youth versus age, and again, being a Latina, we see age as a plus, not as a minus. You know, when you hear people say, oh, he's too old, he's 70, for us that's a good thing, actually. You learn a lot from elders. You know, you get the experience, you get the wisdom.

GREENE: Yolanda does have disagreements with McCain. She supports abortion rights, and that's one reason she usually votes for Democrats, but not in this presidential race.

MURRO: McCain has always been middle-of-the-road with that, too, where he's comfortable with women making choices. So I'm okay with that too. So I think that's where the balance lies for me.

GREENE: But Tibi's support for McCain is also driven by her belief that Barack Obama is unacceptable. For one thing, Tibi says she was bothered when Obama left his Chicago church after the controversy over some of Pastor Jeremiah Wright's sermons. Tibi points to her own Catholic faith and the recent sex-abuse scandals.

GREENE: You heard how Tibi said Obama changed from Muslim to Christianity. For the record, Obama spent part of his childhood in Indonesia, but in a secular household. Obama stresses he's a devoted Christian, and his campaign has started an entire Web site to respond to mischaracterizations of his background. But the Obama campaign's challenge is clear. Listen to Teresa Ramirez.

TERESA RAMIREZ: He's from the Middle East. He's got the background from the Middle East. When he was a little boy, he went to school, it was a Muslim-run school. Those are the reason I don't trust, is because those people, they brainwash the kids when they are little. They are six years old.

GREENE: Now, Obama did not attend a Muslim school, and I pressed Teresa. I said Obama has never practiced in the Muslim faith. Her response?

RAMIREZ: He dropped his church with the first problem he have, and that prove, though, he's lying when he say he was not a Muslim, because it's already two religions that he dropped. I mean, is what we expect him to do in this country when there be something, something big, though he don't know he act? You know, that is something, though, I cannot trust him. It's one of the reasons I don't believe in him.

GREENE: Sonja Ravelli(ph) is a Republican. She's originally from Brazil.

SONJA RAVELLI: I was a student. I've been there. We want all the different things. We don't know why, because we're tired of our parents sometimes or tired of our grandparents, we're tired of the government. And when we want change, we should go to the closet and change our clothes because we don't have a structure to change the country. Go and buy a new suit, a new dress. Change yourself, but leave the country for the people who have a responsibility to make decisions.

GREENE: Sonja and the other women in Latinas for McCain say they'll be offering these views to other women and encouraging them to get to the polls in November. David Greene, NPR News. 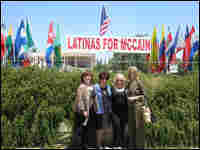 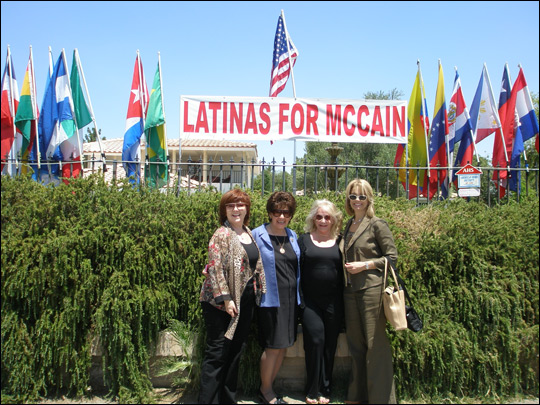 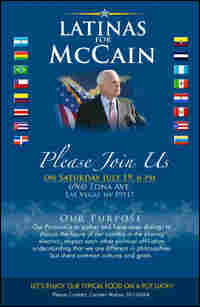 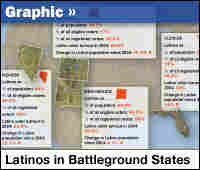 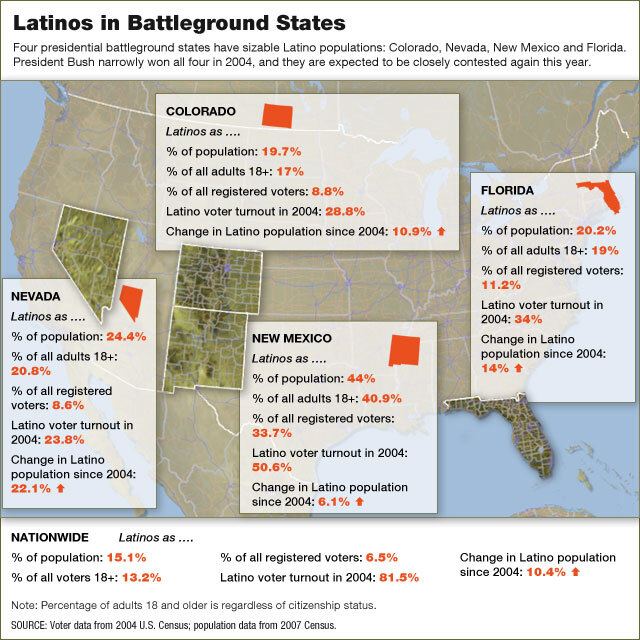