Accessibility links
Brown Estate In A 'Cold Sweat' Over Image Use The estate of the late "Godfather of Soul" says Corbis Corp. violated James Brown's right of publicity by selling photos of him. Corbis has asked the Illinois Legislature to pass a law to protect its business of selling celebrity photos.

Listen
Brown Estate In A 'Cold Sweat' Over Image Use 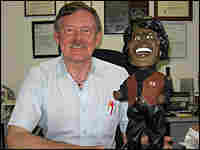 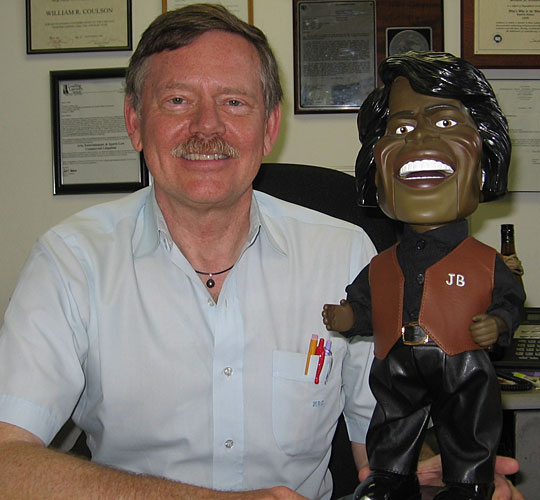 The attorney for James Brown's estate, William Coulson, uses a James Brown doll to illustrate the right of publicity.

Soul singer James Brown's musical signature was hard-driving, rhythmic sound. But it's not his music that's an issue in a court battle in Illinois, it's his image.

The litigation pits the estate of the late "Godfather of Soul" against the Corbis Corp., the giant stock photo agency founded by Microsoft's Bill Gates. And now Illinois lawmakers are joining the fray.

You've likely seen a concert photo of Brown — sweat pouring off his face, his features twisted with emotion. William Coulson, the attorney for Brown's estate, says when a phone card company put one of those images on its cards, it violated Brown's "right of publicity."

If a photographer takes a photograph, the photo is an original work and it's protected by copyright. But the subject of that photo must grant permission before it is used on a product like a T-shirt or a mug. Celebrities typically charge a licensing fee for that use. The "right of publicity" is a law in about 20 states.

Coulson points to a doll on his desk as an example: "This is authorized by Mr. Brown and now by his estate," he says.

The Corbis photo archive is one of the world's largest. It has millions of photos on its Web site, and it acts as a middleman, negotiating copyright deals with photographers and licensing images they've created to others.

Corbis has about 300 photos of James Brown online. While the company warns customers they must get permission if they plan to use an image in a commercial way, Coulson and the Brown estate argue that because Corbis charges for the images, it too must seek permission, in effect challenging the archive's fundamental business model.

"We allege that they were selling Mr. Brown's concert photographs over the Internet without his consent and they were doing it, we allege, for commercial purposes," Coulson says. "And if they're going to sell his photographs, they may have to share part of the sale with whoever the photographer is who has a copyright, but ... under the rights of publicity, [Corbis also has] to give a portion of that money to Mr. Brown."

"Corbis makes a profit based upon its license of the copyright; it's no different if the photographer were to sell that image directly," he says. "What we clearly don't do is we clearly don't profit from — and our licenses clearly exclude any profit or license to — the personality rights."

Just like Coulson, Green has a prop — this one to illustrate the line between copyright and the right to publicity. It's a little racecar with a picture of the late actor and racecar driver Steve McQueen on the front.

"When the manufacturer who produced the toy car went to go make this and do the product packaging, they went to the studio and got the right to use the media, the photographs and the footage and the stills from the movie Bullet," Green says. "Then they came to the Steve McQueen estate and they secured the right to use the name and image of Steve McQueen separate and apart from the photographs."

Corbis asked the court to dismiss the lawsuit, but the court ruled the estate had a claim worth hearing and a higher court upheld the ruling. So Corbis went to Illinois lawmakers and lobbied them to change the state's right of publicity law.

State Sen. John Cullerton says the court rulings show there's some confusion over the intent of Illinois' right of publicity law. The way he understands it, the right of publicity comes into play after a photo is transferred to someone who uses it for commercial gain.

Although both chambers of the Illinois Legislature approved amending the law, the bill stalled before it reached the governor's desk. State Rep. Monique Davis asked her colleagues to reconsider their vote, saying it would influence the court case.

Lawmakers are expected to take up the bill again later this year. But even as the case continues, Corbis says it is hoping one day it will be able to strike a deal to do more than sell Brown's images online. There's already a doll, so maybe it'll be something like ... hot pants?