Accessibility links
At Home With The Homemade Jamz Host Michele Norris recalls how the new CD from the Perry siblings was kid-tested and mother-approved.

At Home With The Homemade Jamz

At Home With The Homemade Jamz 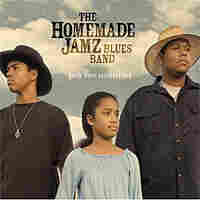 Sometimes I think mail carriers must hate coming to NPR. We get a massive amount of mail. Stacks and stacks of mail. Boxes and bundles filled with books and CDs and all manner of press releases.

When it comes to all that music, I try to sample a broad range of the offerings, but I can't possibly listen to everything that arrives. Not even close.

So I often take CDs home and take a listen in my car or in my kitchen when I cook. Recently, I threw a CD in my bag that I thought my kids might enjoy. Sometimes I road-test music meant for a pint-sized audience on the little people in my own household. From the packaging, I assumed the CD for the Homemade Jamz Blues Band fell in that category.

After all, it pictured three kids on the cover: Two boys wearing cowboy hats and serious expressions, and a little girl standing in the center, staring off into the distance. She was the one who caught my eye. She's wearing a baby-blue smocked shirt and a ponytail, and she looked to be about 9 years old — the same age as my daughter.

I popped in the CD while making rigatoni at the stove, thinking the kids could bop along as they worked on an art project at the kitchen table.

From the first chord on the electric guitar, everyone in the kitchen bolted up to pay attention. This was blues music. Real blues music. The kind of stuff that B.B. King and Muddy Waters belt out in juke joints down in the Delta. The kids bopped at the kitchen table, all right. And so did the grandparents in the den. Frankly, I did a few two-steps myself while cooking at the stove.

I decided I had to meet the three kids who make up the Homemade Jamz Blues Band, so we invited Ryan, Kyle and Taya Perry to visit our studios. I had the pleasure of watching the adults in the room go through the same jaw-dropping experience. Faces twisted. Eyebrows raised. Are these kids really playing this music? It was rich.

Who knows if these kids will get rich playing their music? I got the sense it's not what drives them. They're not even old enough to vote, and they've already found their talent and their passion. And anybody who listens — well, they're made richer by the experience.