Accessibility links
Prescribing Prozac For Dogs And Cats Can dogs and cats have psychiatric problems? Increasingly, pets are getting animal versions of human drugs aimed at combating mental illness.

Should this dog be medicated? 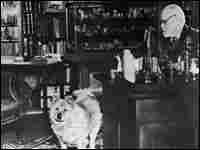 When writer James Vlahos first started looking into a story about people who gave their pets psychiatric drugs, he thought the idea itself was pretty crazy.

"We're giving drugs to pets?" he says he asked himself. "What has America come to? I approached it pretty cynically." But he changed his mind while working on his article, "Pill-Popping Pets: Dogs, Cats and Mood-Altering Drugs," which appears in this Sunday's New York Times magazine.

"What I hadn't really thought about was the concept of a pet being genuinely mentally ill," he says. "I just hadn't given that much thought to the mind of a cat or the mind of a dog."

But drug companies are paying lots of attention to Fido's or Felix's mental states. For the first time, drug companies have sold more drugs for pets than for farm animals. One market research firm Vlahos cites in his article estimates that Americans spent at least $15 million for behavior-modification drugs for their pets in 2005.

Vlahos says it's all part of an American trend to humanize pets. He says pet owners think to themselves: "I feel a lot better now that I'm taking Elavil — I wonder if my dog would as well." That humanization, writes Vlahos, "has pharmaceutical companies salivating like Pavlov's dogs."

In researching his article, Vlahos came across a number of animals whose behaviors were best explained by using models of human mental illness and who responded to drug treatment.

There was Booboo the cat, who inexplicably began attacking his owner, Doug. Every once in a while, the cat would get all glassy-eyed and lunge at Doug in attacks severe enough to send the man to the hospital several times for stitches. Vets theorized that the cat had a deficiency of serotonin, a neurotransmitter in the brain that helps provide a feeling of well-being and pleasure. The vets thought each attack gave Booboo a rush of excitement and also a serotonin boost that made him feel better. Booboo was prescribed Prozac to boost his level of serotonin; the drug seems to have reduced the attacks.

Then was the dog who chased his tail — and not just occasionally, like many dogs, but up to five hours a day. When he wasn't chasing his tail, he was clearly thinking about it, says Vlahos. "He had an enemy, and this enemy was attached to his own body, and he had to chase it." The dog was diagnosed with obsessive compulsive disorder.

Many dogs are prescribed drugs with the same active ingredient as Prozac. "The only thing different with the dog version is the dosage size and that they've made it taste like beef," says Vlahos.