Accessibility links
For 'Willie & Joe,' War Is Hellishly Real — And Funny The gritty, essential cartoons that Bill Mauldin published during World War II are the real thing and then some. Laurel Maury reviews a new collection of the Pulitzer Prize-winning cartoonist's work.

For 'Willie & Joe,' War Is Hellishly Real — And Funny

For 'Willie & Joe,' War Is Hellishly Real — And Funny 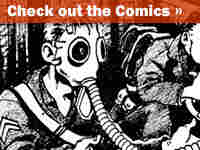 View some of the comics. 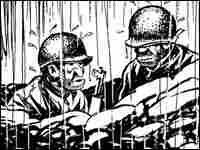 The image of the slouched, tired "dogface" comes in part from the pen of cartoonist Bill Mauldin. hide caption

We don't picture World War II soldiers as ramrod-straight, clean and bright-eyed. We honor them because they slogged through mud and took care of their buddies in a conflict that — despite their fierce dedication — they didn't relish. This image of the slouched, tired "dogface" comes in part from the pen of cartoonist Bill Mauldin.

"That can't be no combat man," one of his characters says, watching a cocky GI pass by. "He's lookin' fer a fight."

Born poor and part-Apache in New Mexico, Mauldin joined the 45th Infantry in 1940 and won a Pulitzer Prize for editorial cartooning in 1945, at age 23. Generals raged against the artist's irreverent daily Stars & Stripes strip, "Up Front ... with Mauldin." (In person, Patton once chewed out the cartoonist so severely that Eisenhower, a fan, had to intervene.) But enlisted men adored his portrayal of soldiers as unshaven grunts stuck in an apocalypse. The solders' stand-ins, Mauldin's everyman heroes, were a couple of long-suffering, wisecracking infantrymen named Willie and Joe.

If Willie was Mauldin's chatty comic relief, Joe, the crooked-nosed, square-jawed hero of so many of the artist's one-panel strips, embodied the way America pictured its foot soldiers: reliable men of few words who shouldered the craziness of war with dignity. Their sense of battle was that it was a terrifying ordeal and a numbers game ("I'm beginnin' to feel like a fugitive from th' law of averages," Willie once says to Joe).

These gritty, essential cartoons — everything Mauldin published during the war that still exists is compiled here — are the real thing and then some. On at least one occasion during the war, the engraved plates were made from the zinc lining of caskets. That gravity and humanity is among the things that hit you most about these panels: Even when every vestige of civility and society has been stripped away, Willie and Joe remain good and decent men. 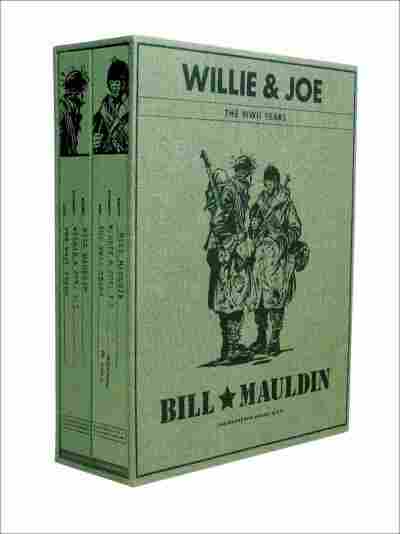