Accessibility links
Karen Dalton: A Reluctant Voice, Rediscovered She had a voice of striking, unusual beauty — and looks to match — yet she spent much of her life misunderstood and under-recorded. Now, 15 years after her death, the elusive folk singer's music has never been more popular. 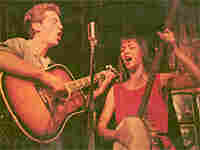 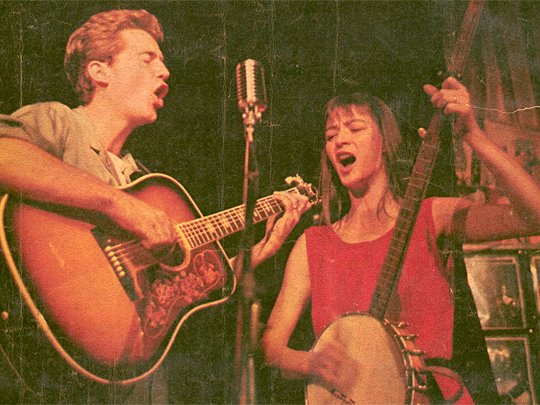 A song from the new collection Green Rocky Road (home recordings from 1962-63): 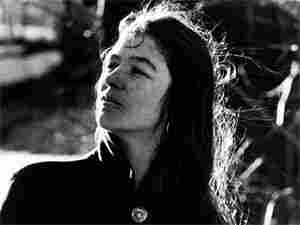 Karen Dalton died with two studio albums to her name. A collection of her home recordings was recently released. Elliott Landy hide caption

The folk singer made the record at her cabin in Colorado with nothing but a 12-string guitar, a banjo and her voice. Joe Loop captured the recordings on a reel-to-reel tape deck in 1963.

"I can still see her in my mind, sitting in her rocking chair with that long-neck banjo, rocking back and forth playing," he says.

At the time, Loop owned a coffee shop in Boulder called The Attic. Young singers who were just discovering traditional folk music would stop there on the way from coast to coast — people like David Crosby and John Phillips. Loop says Dalton put most of them to shame.

"She was the real deal," he says. "Karen had been living the life and doing it for some time."

Dalton could sound like Billie Holiday, and she had the striking beauty of a Walker Evans dustbowl portrait. Bob Dylan called her his favorite singer from the Greenwich Village folk scene of the 1960s.

She never enjoyed much commercial success, but her emotional performances and tragic life story continue to attract new fans. Fifteen years after her death, her music has never been more popular.

Dalton grew up in Oklahoma, and was married and divorced twice by the time she was 21. In the early '60s, she moved to Greenwich Village, where she crossed paths with Dylan, who occasionally backed her up on harmonica.

Dalton also got married for a third time, to folksinger Richard Tucker. "If you saw her on a stage in a small club and heard her voice, it was just awesome," Tucker says. "My favorite was [when] she did blues, really slow. The slowest blues I ever heard in my life."

It wasn't just Dalton's singing that drew comparisons to Billie Holiday: Her tumultuous personal life also became part of her mythology. Her daughter, Abralyn Baird, says that Dalton lost her two bottom front teeth when she got in the middle of a fight between boyfriends.

"The man she was living with at the time, he came home and found her in bed with my soon-to-be stepfather," Baird says. "Heh and, yeah, a fight ensued. She got punched in the face. She always said when she got that big recording contract and became famous, she was gonna have teeth put in."

But that big recording contract never came through. Dalton was tall and beautiful and certainly looked like a star. But veteran bass player and producer Harvey Brooks says she wasn't interested in playing the music industry's games in an era when musicians had little other choice.

"Karen came from the backwoods of Oklahoma," Brooks says. "She was different. She was very laid-back and reserved. ... There was no fire behind her. By the time the fire came, her personal fire was not up to it."

Dalton did manage to record two albums, with Brooks producing the second one. But he says her personal problems — including a growing reliance on hard drugs and alcohol — made recording them difficult and touring to promote them impossible.

Record companies might have taken Dalton for a rube, but Baird insists her mother was anything but.

"She was very well-read," Baird says. "Our house was always full of books. She knew what was going on in the world, about literature, the whole bit. When people approached her as being the stupid farm girl from Oklahoma, it could really piss her off in a hurry."

And when record executives tried to change her music, Baird says, it made her even angrier.

"She wanted to have her sound," she says. "That's what they told her they wanted to hear, and then she'd get in the studio, and they're like, 'Well, we'll just add a couple tracks to this.' And she's like, 'No.' She'd get furious. My mother was the kind of person who would scream at bank tellers."

But at the same time, Dalton was a reluctant performer, according to cafe owner and recordist Loop. "She had a way of carrying herself and an aura of strength that made it surprising that somebody who had such a strong personality would get in a situation like a recording situation and be really shy and intimidated by the whole thing," he says.

She isn't around to resolve that personality contradiction. Dalton died in 1993. And if she gave any recorded interviews, they're nowhere to be found.

The mystery that surrounds her life may be part of the reason for her recent comeback. In the last two years, independent labels have put out three CDs' worth of reissued and previously unreleased material.

Loop says he's not surprised that she's having more success now than she did in her own lifetime.

"Most people they were recording in the late '50s, early '60s were the Weavers and Pete Seeger and Joan Baez," Loop says. "Kind of the Ozzie and Harriet people of the folk-music world. Straight, cleaned up. Karen didn't belong in that world."

Dalton's stormy personal life may have scared away record executives 40 years ago, but it also may be one of the reasons new fans are discovering what many of her peers knew all along.