Accessibility links
Henry Fleming, Reluctantly Wearing 'The Red Badge' When Henry Fleming joins the Union Army, he's got big ideas of what glorious battles await him. He's eager to impress his friends and a brown-haired girl he likes. But soon he questions himself — and his courage. 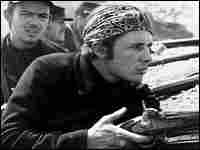 In 1951, legendary director John Huston made a film version of Red Badge. Henry Fleming was played by Audie Murphy who, in real life, was the most decorated U.S. combat soldier of World War II. Hulton Archive/Getty Images hide caption 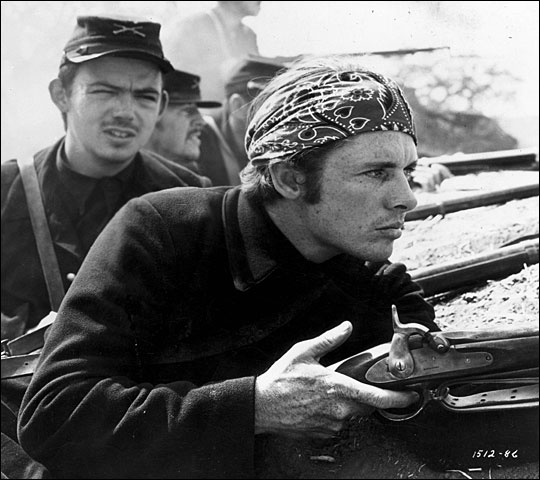 In 1951, legendary director John Huston made a film version of Red Badge. Henry Fleming was played by Audie Murphy who, in real life, was the most decorated U.S. combat soldier of World War II.

Hero? Coward? Conflicted? You Tell Us: The 'In Character' Blog

A painting depicts the Battle of Chancellorsville, a major Civil War conflict fought near the village of Spotsylvania Courthouse, Va., from April 30 to May 6, 1863. Kurz and Allison/Library of Congress hide caption 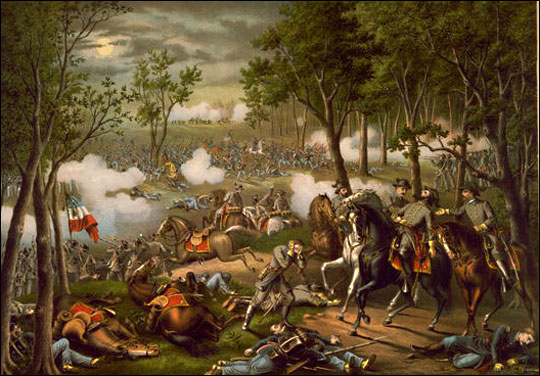 A painting depicts the Battle of Chancellorsville, a major Civil War conflict fought near the village of Spotsylvania Courthouse, Va., from April 30 to May 6, 1863.

Kurz and Allison/Library of Congress 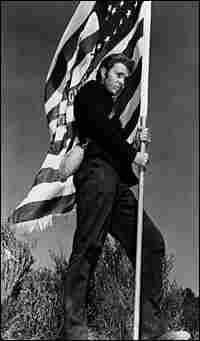 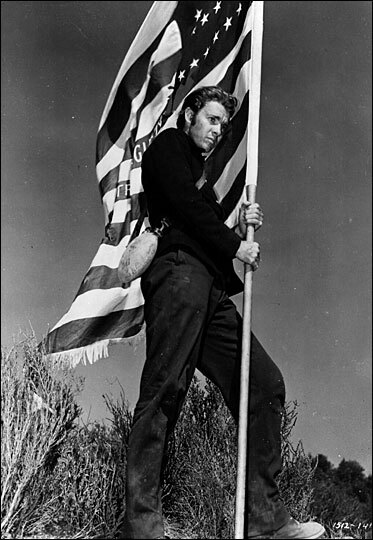 Ambivalence, self-delusion and fear. Henry Fleming feels all of them.

Fleming — or "the youth," as he's called — is the fictional hero of Stephen Crane's classic novel, The Red Badge of Courage. It is one of the first American novels to look at the psychological impact of combat.

When Badge was first published in the 1890s, some Civil War veterans were amazed at how Fleming seemed to feel almost exactly the way they did in battle.

"There are even stories of Civil War veterans writing in to newspapers saying, 'I'm so glad to see Steve Crane publishing this, because he and I were in the same regiment, and he's a good guy,'" says Michael Shaefer, an English professor at the University of Central Arkansas.

They were mistaken. Crane was born in 1871; the Civil War had already ended. But Civil War veterans were still alive when he was writing, and it's almost certain that he talked to them about their experiences.

In many ways, Henry Fleming is a typical raw recruit and a typical teenager. When he joins the Union Army, he's got big ideas of what glorious battles await him. He's eager to impress his friends — and a brown-haired girl he likes.

But pretty quickly, he begins to question himself and his courage.

On the eve of battle, Fleming is "afraid of being afraid," Shaefer says. "He's wondering whether he'll run or stand and fight. Will his friends see that he's a brave man or that he's a coward?"

Crane most likely based The Red Badge of Courage on one of the bloodiest struggles in the Civil War, the Battle of Chancellorsville in Virginia.

Walking through the thick, dense woods where the battle was fought, John Hennessey, a historian with the National Park Service, says the most intense fighting began on May 3, 1863.

"On that morning, in about six hours of fighting, about 18,000 men would fall, either killed or wounded. If you do the math, that comes to about one man every second."

Even though it is believed that Crane never visited Chancellorsville himself, he understood the terrain. In Badge, he writes that the army was "helpless in the matted thickets." Fleming's "neck was quivering with nervous weakness ... the muscles of his arms felt numb and bloodless."

When Fleming sees other soldiers running, he runs himself, "like a rabbit."

Crane's prose echoes real accounts of what happened at Chancellorsville. Hennessey found a letter by a Union soldier who describes watching his comrades run away:

"The retreat was headlong. They had thrown away everything that was loose. Guns, knapsacks, caps and many had no coat or blouse. They were crazed and fought to escape as though the enemy were close to them. We were ordered to stop them, but we might as well have tried to stop a cyclone. They dived through our line regardless of our guns and bayonets."

Not only does Fleming run, but he justifies his running in his head. In one chapter, he throws a pine cone at a squirrel. The squirrel runs away.

"Henry thinks that, 'If it's natural for the squirrel to run away, then it's natural for me to run too,' " says Paul Sorrentino, a professor at Virginia Tech who's writing a biography of Crane.

Henry Fleming is quite a complex guy. He both pities and envies the other soldiers who stayed and fought. He feels guilty that he left them, but superior that he made the natural decision to save himself.

Sorrentino believes Badge is "about a boy whose thoughts are constantly going back and forth between clarity and vagueness about what war is all about, what does it mean to be brave, and whether he did the right thing."

Even though Fleming questions himself on what seems like every page of the Badge, he can't seem to set himself straight.

While he's separated from his regiment, he comes across more fleeing soldiers. In a panic, one of them hits Henry on the head with the butt of his rifle. When he finds his regiment again, he lies about what happened, telling them, "I got shot."

"Henry was inventing all sorts of excuses for his own cowardice in the face of enemy fire," says retired war correspondent Joe Galloway, who co-authored the book We Were Soldiers Once ... And Young.

As a war correspondent in Vietnam, Galloway was with the 7th Cavalry at the Ia Drang Valley, when they were surrounded by 2,000 North Vietnamese soldiers. He believes there have been Henry Flemings in every war.

"Korea is rife with instances of guys who shot themselves in the foot with their own rifle just so they could get out of combat," he says. "They were willing to do that or willing to have a friend shoot them in the leg. Anything. Because they were absolutely terrified."

By the end of Badge, Fleming is transformed from the scared "youth" who runs into someone who is outraged and hungry to fight. Crane writes that Fleming "lost sense of everything but his hate, his desire to smash into pulp the glittering smile of victory which he could feel upon the faces of his enemies."

Park service historian Hennessey found this entry from a real soldier who fought at Chancellorsville:

"My two tent mates were wounded, and after that I acted like a madman. I was stronger than I had been before, and a kind of desperation seized me. I snatched a gun from the hands of a man who was shot through the head as he staggered and fell. At other times I would've been horror-struck and could not have moved. But at this time I jumped over dead men with as little feeling as I would a log."

The Red Badge of Courage has been called a coming-of-age novel. But there has also been debate about what Stephen Crane is saying about courage, heroism and maturity. At the end, Crane no longer calls Henry Fleming "the youth," but rather "a man."

So does war make you a man? Galloway doesn't think so.

"I'm not sure what war makes you except sad," he says. "I don't know that it makes you a man. Or that the army way is a way to make yourself a man. That's an awful high price to pay. There's a very steep learning curve in combat."

Crane brought his fictional Fleming back to life in a later short story called The Veteran. There, Fleming — now an old man — admits that he ran and that he was afraid.